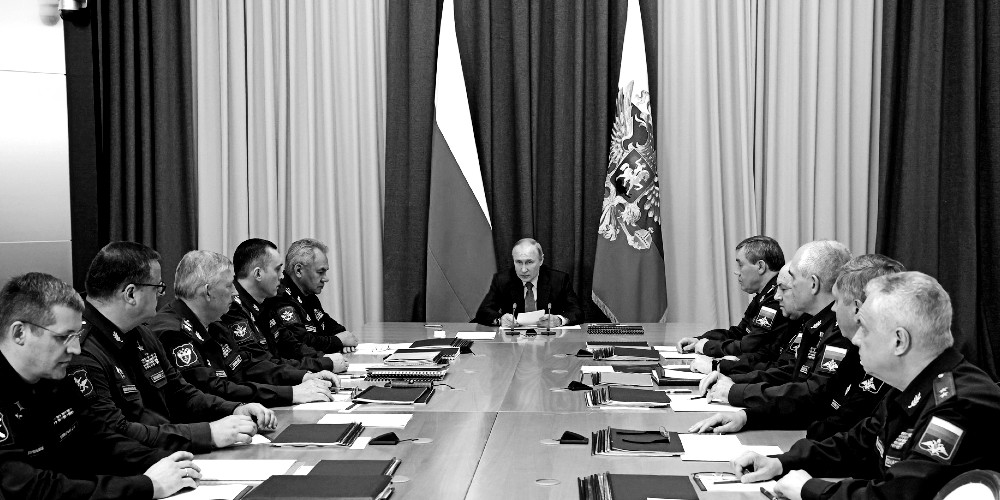 On the eve of the Agincourt expedition in France, Shakespeare’s model King, Henry V, is advised by the Bishop of Ely “if that you France will win, then with Scotland first begin.” In other words, if China, marching ahead of the US is the biggest threat to Western dominance, its friendship “without limits” with Russia increases the danger by geometrical progression. This must be terminated.

The rise of the Sino-Russia duet would have proceeded for some time more, but it coincided with “US in decline; US in decline” chant rising to a crescendo at disorienting decibel levels. This chant was maddening for a super power afflicted by nightmares of the messy departure from Afghanistan. Some rearguard action was needed to restore self esteem.

True 1,50,000 Russian troops on the Ukrainian border would be perceived a threat by all “right thinking” people who watch TV but how would they discern that the 24/7 media they watch has overnight become part of the West’s war effort?

German Naval Chief, Vice Admiral Kay-Achim Schonbach attending a seminar in New Delhi spoke from his heart: “What Putin wants from the West is a little respect which he probably deserves.” It is another matter that he had to resign.

One reaction to the German was from a pretty, pert lady. “Parade Vladimir Putin, XI Jinping, Joe Biden and Boris Johnson at a “swayamvara” (the ancient Indian custom where princesses selected their partners) who would be garlanded by the maiden?” Boris Johnson, holding onto his job by the skin of his teeth because of Partygate? Joe Biden of Afghanistan and Kazakhstan fame, now trying to redeem himself in Ukraine? Vladimir Putin who has 80 percent support for the war. Above all, he lifted Russia from the debris of the Soviet Union and made it into the power it is today. Xi Jinping who supervises a system which lifted 400 million people out of poverty in 30 years? Who would the maiden garland?

British Foreign Secretary Liz Truss who has posed Ukraine as a contest between democracy and autocracy must be in the blues today: her chant was discarded at the hurriedly called meeting in Germany by the Defense Consultative Group on Ukraine. US Defense Secretary, Lloyd Austin clarified the picture: the West was not in the game to help Ukraine’s burgeoning democracy (Azov – Nazi battalion et al) against the “barbarian” in occupation of the Kremlin. “We want to weaken Russia” he said bluntly. There could be no clearer admission of the fact that this war is not about Ukraine. I wrote as much two months ago. Indeed, Ukraine is being plied with billions of dollars plus the most sophisticated weapons in the world to fight a proxy war so that the Anglo-Americans do not lose control of world power.

Thinkers and Statesmen of the old school like George Kennan and James Baker admired the Russian people for having brought about the “greatest bloodless” revolution in history. They were distressed that West, which had promised Gorbachev that NATO would not move east “even an inch”, was not keeping its word.

The so called “liberal” interventionists like Clinton brought Poland, Hungary, Czech Republic into NATO in 1999. Like there would be no tomorrow, in 2004 they gave NATO membership to Bulgaria, Estonia, Latvia, Lithuania, Romania and Slovakia. This was in the heady days before the western decline became official. The dates are interesting.

The Bucharest summit of NATO was attended by George W Bush on the one hand and Putin on the other like two sparring pugilists. Bush “lobbied like hell”, for Georgia and Ukraine to be brought into NATO. Putin said over his dead body. Putin’s red line was crossed. This was in April 2008.

In August 2008, Putin invaded Georgia. Why then this surprise over Ukraine? Mikhail Saakashvili holding a degree from Columbia and a favourite of US Under Secretary of State, Victoria Nuland, became the handpicked President. He was given extensive TV time, but in vain. He projected himself as a darling of the West but eventually came a cropper in Georgia. Saakashvili’s rehabilitation in Ukraine was facilitated by President Petro Poroshenko who made him the Governor of Odessa. All because of a good word from Nuland. When Poroshenko was shown the door so was Saakashvili.

When Saakashvili’s conflict with Putin was in its early stages, the earth moved from under the US feet. On September 15, 2008, Lehman Brothers collapsed. This was the beginning of the “US in decline” chant which drives Biden mad to this day. Ukraine is his response. Rise and fall of empires is routine but the decline of America has been exceptionally painful because the sole super power moment ended with such abruptness. “Decline” must never be mistaken for “fall”, because the US remains the world’s most powerful country. “Decline” is relative but continuous; it debilitates US conduct in world affairs.

At that moment, when US neocons were sketching designs of the American century, full spectrum dominance, the chosen target to keep the Military Industrial complex in good humour became Islamic terrorism. The Soviet Union had condensed into modern Russia which the West had to celebrate as the success of democracy. But the visceral suspicion of Russia never went away. The visceral became real when Putin restored Russia to its present stature. Russia came in the way, first in Kosovo which after the 72 days bombing of Serbia, was carved out to be kept in European care. Various enclaves of Kosovo are protested by European troops. But Russia drove its tanks and occupied Pristina airport with the West flailing its arms.

Russians are responsible for the US reversals in Syria. Leaders like Tony Blair had warned Barrack Obama to keep a steady focus on Islamic terror. Deviating into conflict with Russia would complicate relations with Europe which, wartime bravado apart, is heavily dependent on Russian energy. And now, as the tide turns in the battlefield and the secrets of Mariupol are about to be revealed, nervous punters on both sides are keeping their fingers crossed.