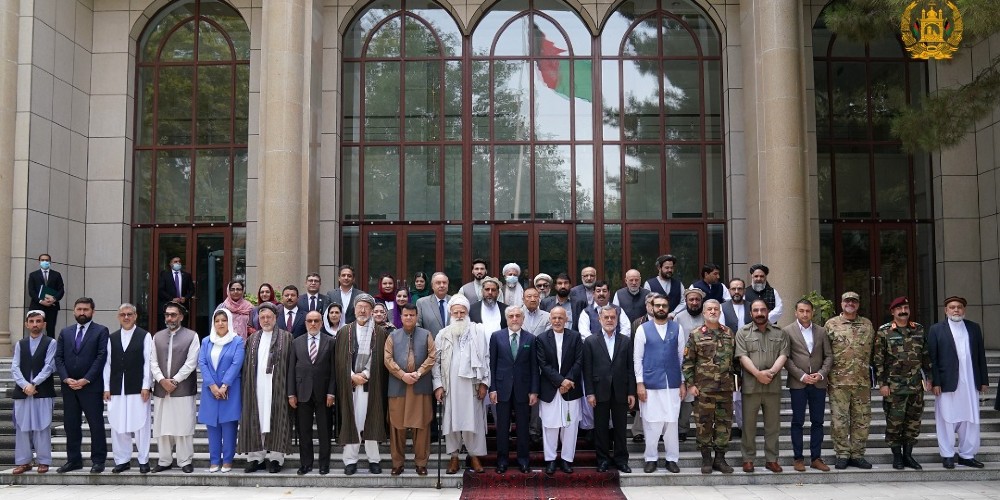 In a series of articles exclusive to Canary Trap, investigative journalist, VK Shashikumar stitches together accounts of staff members who worked in President Ashraf Ghani’s administration. This series attempts to convey their perspectives on what happened on August 15th and what led to fall of Afghanistan’s Government and the swift takeover by Taliban

Few minutes after mid-night on August 15, 2021, a Taliban leader, Qari Salahuddin Ayoubi entered the Arg, Afghanistan’s presidential palace in Kabul with the fighters under his command. By 12.45 am he takes over the Arg and few minutes later gives an interview to Al-Jazeera, sitting at the desk of deposed President Ashraf Ghani. Qari Salahuddin was the Taliban governor in Faryab and was arrested by National Directorate of Security in 2015. In 2018, Salahuddin was exchanged with army prisoners and released.

A few minutes past 1 am on the intervening night of August 15/16, the Taliban flag is installed atop the Arg.

By the afternoon of August 14th it was becoming increasingly clear that President Ashraf Ghani had agreed to handing over power. Around 2.30 pm Ghani sent a communication to his lead peace negotiator in Doha, Mohammed Masoom Stanekzai, confirming his decision. This was immediately conveyed to the Khalilzad.

Before Ghani informed his lead peace negotiator in Doha about his decision to resign, he met all the important political leaders, including former President Hamid Karzai and Dr. Abdullah Abdullah (Chairman of the High Council for National Reconciliation or National Peace Shura). Mohib and Fazly, his two key aides were also present in the meeting. It was during this meeting that he was convinced to hand over power. Ghani agreed to handover the power to a group of political leaders or directly to the new head of the interim/transition administration.

In this crucial meeting, the only person who was not present was Amrullah Saleh, the Vice President of Afghanistan.

Saleh’s vacant chair in this momentous meeting was exploited by Mohib and Fazly to mount psychological pressure on Ghani. They tried to make him doubt Saleh’s intentions. The Vice President was not in favour of Ghani resigning. The trusted advisors played mind games with Ghani. They informed him that Saleh was planning a coup with the Défense Minister, Bismillah Khan Mohammedi.

This disoriented an-already anxious Ghani because just a few hours ago he had chaired a coordinating meeting on the security of Kabul and its adjacent provinces. In this meeting Bismillah Khan presented his security plan to safeguard Kabul. In this meeting, General Pitt Weasley, the commander of the United States forces in Afghanistan, assured the support of US for the country’s armed forces.

Ahead of this meeting the Arg issued a press release on the appointment of Field General Seyyed Sami Sadat as the General in-charge of Kabul security. Given all these complex arrangements – the security of Kabul, the agreement to form a transition government and Ghani’s agreement to resign – what were the compelling reasons for Mohib and Fazly to meet Ghani till 11.30 pm to convince him that the peace plan was a trap?

Ghani’s work day on August 15th started with an emergency request for a call with Defence Minister, Bismillah Khan Mohammedi and other security officials. One of the pictures coming out of the Arg that morning is Ghani at his desk with a well-thumbed book placed on the right.

Around 11 am on August 15th Ghani’s panicked trusted advisors, Mohib and Fazly, rushed to the President’s office. They informed him that gun shots have been reported from Kabul city and that the Taliban was closing in. Fazly instructs Waheed Omer, head of President’s communications and media team to put out a social media post: “Honourable compatriots of Kabul, the sound of gun fire has been heard in the outskirts of Kabul city. The country’s security and Défense forces together with international colleagues are looking after the city’s security. The situation is under control.”

Some insiders have told this author that Mohib evicted Ghani by force. The President Protective Service (PPS) personnel first evacuated the First Lady, Rula Ghani, to the helicopter. The President didn’t want to leave his office because he believed that he would be safe. According to him the government’s peace negotiating team had struck a deal with the Talban for a peaceful transition of power. Fatima Gilani a member of the Afghanistan’s peace negotiating team in Doha is on record, confirming that the Taliban agreed that they would not enter Kabul and allow a peaceful transfer of power. This is what the Americans believed, too. In any case this was the American plan.

By noon on August 15th the Afghan Government had collapsed. There was complete disarray amongst the rank and file of the Afghan defense and security forces. Vice-President Saleh and Defense Minister Bismillah Khan were already on their way to Panjshir Valley. Later Amrullah described the collapse as a “shameful surrender to Pakistan.”

According to one of the closest aides of President Ghani who escaped from the Arg “every security arrangement at all levels collapsed. This vacuum led to looting across several areas of Kabul city and the situation had become so untenable that the former President Hamid Karzai called on the Taliban to enter the city to restore order.”

The script of the peaceful transfer of power went awry from this moment onwards.

Till 10 am on August 15th, the US Embassy precincts appeared to be normal. The US Embassy is close to the Arg. But around 12 noon a column of smoke rose from one corner of its compound. The embassy staffers were destroying documents and equipment as they prepared to evacuate. Two hours later, at around 2 pm, US military Chinook helicopters began evacuating diplomats and staff from US Embassy in Kabul.

By this time Ghani, his wife and his core team of officials were already at the Kabul International Airport, ready to head out. The US military had taken over the control of KIA and all air traffic around the Kabul airspace was suspended to facilitate evacuations. Flight tracking open-source intelligence platforms reported two significant departures”.

“3.27 pm: An unidentified aircraft is heading from Kabul to Uzbekistan right now…” Presumably, this was a decoy and Ghani left with his entourage in a Boeing 737-800 around midnight and the plane was being flown by Russian pilots.

Inclusive of Ghani and his wife there were supposed to be 53 people from the Arg escaping Afghanistan. But one of them had to make a difficult choice at the tarmac because of the last and final call from Mohammed Masoom Stanekzai, head of Afghanistan’s peace negotiating team in Doha to Muhammadullah Amin, Head of Presidential Protection Service. The instruction was crisp and clear: “Hand over the Arg to Taliban.”

So, Amin returned to the Presidential Palace and waited for the Taliban. He received Taliban leader Qari Salahuddin Ayoubi and his Talib fighters at the entrance, escorted them straight to the President’s office. Qari sat on the President’s chair. One of his body guards drew up another chair next to him for Amin to sit.

Amin confessed on live television that he returned from the airport on the order of Stanekzai to surrender the Arg to Taliban.

This is how Taliban announced its takeover of Kabul and Afghanistan.

Part 3 will focus on the role of Pakistan military in the palace coup and bringing back Taliban rule in Afghanistan.