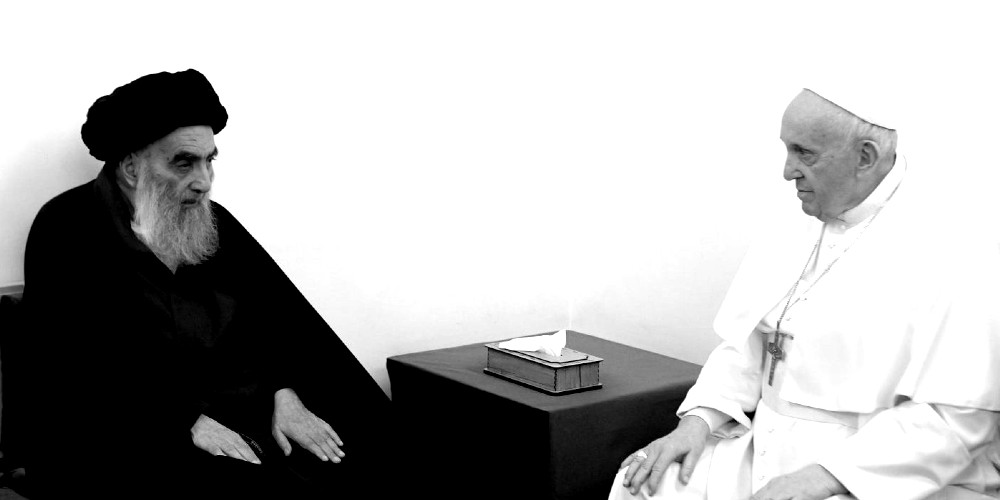 Pardon my Lucknow chauvinism, but the benighted city once had intimate links with the centre of Shia Islam, Najaf, in Iraq, which Pope Francis visited early March in what must be counted among the Pontiff’s most epoch making journeys. His 50 minutes conversation with Shia Islam’s highest spiritual authority, Grand Ayatollah Ali Sistani, in his modest, rented house in a Najaf alley, must have enriched both.

“A humble and wise man”, the Pope said of Sistani. “It felt good, for my soul, this meeting”. This was no hyperbole; this seemed to reflect the tenor of the conversation, where only interpreters were present.

Yes, that Lucknow link: in 1850, the Begums of Oudh (Awadh) established what came to be known as a Bequest, a trust, of rupees six million to be spent on the maintenance of the shrines at Najaf and Karbala. Stipends for Indian scholars were also established. After the first war of independence in 1857, the British administered the bequest, which gave them leverage over the Shia clerical authority from Najaf to Tehran. By default or deliberation, the system continued until 1979 when Saddam Hussain consolidated power in Baghdad. Saddam’s Ba’ath atheism would have been uncomfortable with Indian indulgence of Shia sectarianism. What would Pope Francis have made of the fact that “Allah o Akbar” was inscribed on the Iraqi flag only after Operation Desert Storm in 1992?

Another Lucknow link would have come up tangentially: Awadh antecedents of Ayatollah Khomeini, leader of the Iranian revolution. Khomeini’s ancestors migrated from Kuntur, a qasbah not far from Lucknow, known for a line of Shia theologians.

The Pope would have been briefed on the vast difference between Sistani and Ayatollah Khamenei (Khomeini before him) on the role of the clergy in the affairs of the state. The issue had divided the Shia clergy down the middle. How can the Iranian revolution of 1979 be deemed to be an “Islamic revolution” without the second coming of the messiah who, in Shia theology, happens to be the 12th Imam who had “disappeared” in Samarra, Iraq. He would appear only on the Day of Judgement.

The clergy in Qom were on sixes and seven. I was in Qom to meet Ayatollah Montazeri when this was a common topic of discussion. A revolution had come their way, pending Roz e Mahshar, Judgement Day. What label was to be pasted on the great happening? That is when the theory of Vilayat e Faqih or Vali Faqih, the Intermediate Imam, was enunciated. Pending the return of the Imam, an Intermediate system, under the Supreme leader, would govern, guided by the teachings of Islam.

Sistani and a section of the clergy even in Qom see their role differently – as spiritual guides only. Was Francis comfortable with Sistani on this score? The different circumstance of Tehran and Baghdad must have been part of the briefs prepared for Francis.

In 1979, the Shah was eased out and the Ayatollahs ushered into Tehran. Ayatollah Khomeini, who had been moved from Najaf to the suburb of Neauphle-le-Chateau on the outskirts of Paris, was that very year flown to Tehran. Why this complicated trapeze act?

In the mid-70s, the US had communist parties coming out of their ears in Angola, Mozambique, Ethiopia, Nicaragua, Chile, why, even in Afghanistan. Post Shah fervour in Iran would cause Persian Communist Parties, Tudeh and Mujahedin e Khalq to surface from the underground. The Ayatollahs, the mosques filled with their cadres, would pounce on the communists. That the Ayatollahs would be no friends of the Americans became apparent only when the siege of the US embassy in Tehran lasted 444 days, an embarrassment on a scale the Americans had never experienced.

1979 also happened to be the year in which Saddam Hussain consolidated himself in Baghdad. Neither the Ayatollahs nor Saddam were buddies of the US, but each could easily be tempted to seek US help against the other. This suited US officials like Martin Indyk, former Ambassador to Israel, who devised dual-containment – supply arms to both and make them fight. The monkey-between-two-cats policy lasted eight long years.

More to the point for the Pope would have been the after effects of the post 9/11 wars thrust on Iraq, Syria, Libya, leading to the trek of millions looking for havens in Europe which, in this instance, was fighting xenophobia at home, a creeping aversion to the outsider, resulting in avowedly illiberal politics. Two of the world’s highest religious leaders must have exchanged views on this frightening trend. True they are religious leaders whose mission was not to discuss politics, but rampaging identity politics are nothing but putrefied religious ideas.

Islamic terror, for instance, is cited as a cause for increasing Islamophobia by politicians like, say, Marine Le Pen in France. Such examples are strewn across Europe and other parts of the world. What was at fault was a one sided media focus on Islamic terror, fuelling a Muslim sense of helplessness and anger, there being no outlet for his point of view.

Some of this Sistani must have addressed during their conversation. I hope he reminded the Pope that the first act of occupying forces was to vandalize the National Museum, the great storehouse of artefacts, books, scrolls representing one of the world’s great river civilizations.

It might be something of a hyperbole that his meeting with Sistani, laden with peaceful intent, reversed the jihad or crusade launched in 1095 by one of his earlier predecessors Pope Urban II. The eleventh century Pope was rattled by the Muslim occupation of the holy lands. Also, within a hundred years of Prophet Mohammad’s death, the Muslims had established their rule over Spain and beyond. The pace of Muslim spread was unnerving. Pope Francis’ expedition on the other hand provides a soothing touch to a people battered and bruised, having been on the declining side of the civilizational giant wheel for too long, a far cry from the days of Pope Urban.