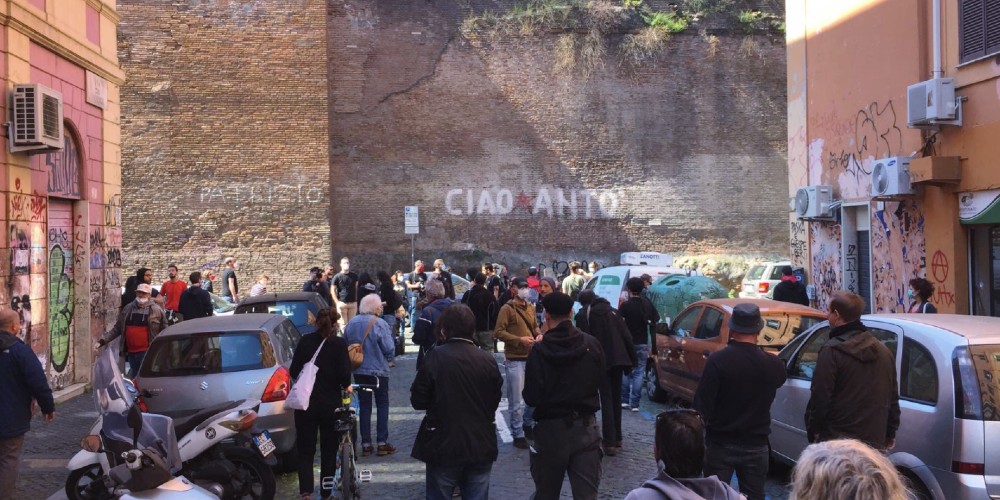 On April 11 morning several Italians in the San Lorenzo district of Rome wanted to offer their last farewell to Salvatore Ricciardi, a former political prisoner and voice of Radio Onda Rossa. He died two days earlier. As his coffin was taken from the hospital and through the streets of the Via Dei Volsci neighbourhood, passing under the headquarters of Radio Onda Rossa, a spontaneous procession of his fans, supporters, acquaintances, colleagues, family and friends followed him. Everyone, mindful of COVID19 pandemic burning through Italy, respectfully maintained safe physical distancing and wore masks.

As the procession moved in silence and sadness, some of Ricciardi’s supporters begain inscribing on the Aurelian walls of the neighborhood in his memory. Within moments police in anti-riot gear arrived on the scene and used water canons to disperse the mourners. The police action was in response to the ban on public gathering imposed by the Italian government.

The police action at Ricciardi’s funeral procession and subsequent detention of his supporters marks a turning point in the lives of a small band of ultra-left wing activists in Italy. Amidst the Covid19 crisis, the Communist Party of Italy (PCM-Italy) is making its presence felt in the margins of the country’s political system.

The coronavirus-wracked Bergamo, a province northeast of Milan in the Lombardy region with a population of over 1 million, along with the adjacent region of Brescia are the worst affected by Covid19. A blog written by an Italian trade union activist, who identifies himself as Sebastiano, a worker of the Dalmine steel plant and member of the S. I. Coboas union says “it is difficult not to have some workmates or family members who are dead or sick from the coronavirus. What we are experiencing on our skin is not a tragic fate but, on the contrary, the proof of very specific responsibilities. It is very common here the feeling that someone will have to pay, and many among the workers say: ‘we will give them the bill’. But the problem is that the conditions for this to happen must be built right now. What is happening should make workers aware that the virus is a product of the capitalists and their production system, based on profits, not health, a virus of Capital, which made the living and social conditions and the health facilities themselves a favourable terrain for the contagion.”

According to the online magazine on labour and trade union issues, Labor Notes, “S.I. Cobas, or in Italian the Sindicati Interaziendali Comitati di Base (Cross-firm Base Committees) have done extensive work organizing in the logistics sector, principally in northern Italy. As their name suggests, base committees are formations at the “base” and are not part of the country’s three principal trade union federations: CGIL, CISL, and UIL. They initially arose in the 1990s in manufacturing, teaching, and hospitals in reaction to the perceived collaboration of the traditional unions with the government and the corporations. There are cobas in many industries and sectors, but S.I. Cobas has a focus on organizing logistics workers in the north of the country, principally in Emilia Romagna and Lombardy. Their members are largely immigrant workers, many from northern Africa. They have engaged in several high-profile struggles against companies like Ikea and DHL, employing the tactic of striking and then blockading the flow of merchandise in and out of the warehouses.They rely on community and political support to buttress these tactics.”

The statistic on Bergamo show that it is the area with the highest concentration of workers in Italy, due to the huge number of factories: 4.1 plants per km, while the Italian national average is 1.6. Several Cobas members have been vocal on Italian social media platforms and like Sebastiano suggest that “the real number of worker deaths are double the official one (including a high number of those who were quickly buried, with not even a swab test)”. These allegations were further strengthened when the mainstream local newspaper L’Eco di Bergamo had to admittedly report the issue of wrong death count or hiding the real numbers of Covid19 deaths in Bergamo. Sebastiano, further writes, “but these stats still hide the massacre of the elderly, a decimated generation. 1 in 10 are dead in the nursing homes, deliberately left to themselves, expendable by age because they are no longer productive.”

The Italian health workers took up a tremendous challenge when the authorities directed them to thwart barehanded and unprotected the dangerous virus. The nurses, doctors and frontline health workers have paid a very high price. Till date the Italian government hasn’t furnished accurate data on how many nurses, doctors and health workers perished in their fight against the pandemic. Walter de Caro, President of the Italian Nurses Association, said in a press release that “in most cases, nurses and doctors are forced to wear masks which are far past their effective use, and in some hospitals in central and southern Italy, staff have no PPE at all.”

The Covid19 public health disaster in Italy has emboldened the essential services workers and frontline health staff. This has created a fertile political ground for organized action of workers, which might threaten the mainstream political formations in Italy. The logistics workers, in the warehouses who are controlled by the Casas and those in the food factories have been staging micro-conflicts with the government to get protective equipment.

The Covid19 crisis is severely testing the economic model of Italy because workers are pointing out their existing condition as “new-slavery.” Already rebellion inside the warehouses have begun. Will this sustain and metamorphose into a bigger rebellion against the “Confindustria”? The Confindustria is the main association representing manufacturing and service companies in Italy, with a voluntary membership of more than 150,000 companies of all sizes. It unwisely influenced the Italian government to refrain from establishing “red zones” as circuit breakers to slow down pandemic outbreak. Eventually, the unwillingness to impose lockdowns during the pandemic outbreak resulted in a massive loss of lives as the Italy’s health system collapsed with a deluge of Covid19 patients.

While “Confindustria” popularized the video-clip “Bergamo is running” to reassure international customers and continue their business, the owners of the big multinational companies based in Bergamo, Brembo and Tenaris were already aware of the impact of coronavirus. They knew the impact the virus would have on factory workers, since they had already seen first-hand the impact on the workers in their plants in China months earlier. The Confindustria already had documented evidence of the impact of Covid19 on nearly 100,000 Chinese factory workers in Italian owned manufacturing units in Wuhan. Amongst others, Italian fashion brands Gucci and Prada have manufacturing units in Wuhan. The Italian private sector influenced the government to continue with direct flights to Wuhan, till it was too late.

The Italian private sector instead of protecting its workers, kept the factories and manufacturing units in Italy open till the second week of March. The Confindustria passed messages through trade unions that there was no risk to the workers. In fact, on March 6 a meeting was held in Bergamo between the management and representatives of the mainstream unions to agree on a protocol to keep the factories open even under the pandemic risk. The factories remained open until high absenteeism and the weight of the spontaneous strikes by workers, finally, forced their closure.

Suspicion has also grown over the traditional trade unions who the factory workers feel allowed the “new slavery” to happen. In Bergamo, factory workers have reportedly told local media that they have “understood that masters do not care about our health, their profits come first.” In his blog, Sebastiano says “the proof is our workmates who died after being infected in the factory while the bosses hid the data on virus positive people and made everyone work without protective equipment, all in the same sheds and locker rooms. This is the true face of exploitation.”

The Italian workers message to the government is clear: “we drew experience from all this and we will give you the bill to pay, and it will be high!”