The Daood Gilani alias David Coleman Headley case has generated huge interest in India, considering the allegations of his involvement in the November 26, 2008 Mumbai terror attack. But for the United States of America, it is yet another instance of how their alleged informants are using their territory to carry out terrorist activities around the world, and in the US too.

Headley has been linked to terror groups like Lashkar-e-Taiba and al Qaeda. Intelligence sources have already indicated the possibility of his involvement in numerous terror plots in different countries, including his role in the 26/11 Mumbai terror attack. It is very surprising how Headley operated freely from the US with the law enforcement agencies having no clue of his activities. Details have already emerged that Headley worked for the US’s Drug Enforcement Administration (DEA) as an informant for a long time. Questions have also been raised about his links with the Central Intelligence Agency (CIA), which may explain his many unhindered trips to Pakistan in the past decade. Details have also emerged that he was being used to penetrate Pakistani terror group Lashkar-e-Taiba.

The US administration has also prevented the Indian security agencies from questioning Headley about his role in the Mumbai attack. Despite the Indian government’s repeated statements about seeking Headley’s extradition, it is highly unlikely that they would get access to him for interrogation, even in the presence of the US officials. Now, why the US is deliberately trying to shield Headley from questioning by foreign agencies raises a lot of questions about his association with the American intelligence agencies.

Headley’s case is frighteningly similar to another US informant, which the US would never want to forget. Ali Mohamed — former Egyptian army officer turned CIA operative, Special Forces advisor, and an FBI informant — is one of the most dangerous intelligence operator who compromised the US intelligence community before the fateful September 11, 2001 attacks. 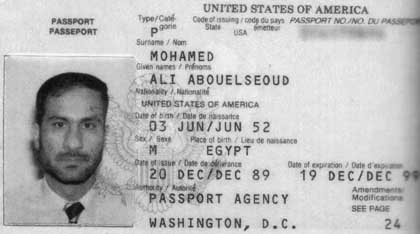 Mohamed, rightly referred as an al Qaeda sleeper agent, maintained smooth relations with al Qaeda and the US agencies simultaneously and gained access to the most sensitive details of the US counter-terrorism plans. The US intelligence agencies have much more to answer about this fiasco. And as mentioned in the initial part of the post, Headley’s case has many similarities with Ali Mohamed’s story.

One thought on “Is Headley US’s another Ali Abdel Saoud Mohamed?”