Since the abduction of the Indian Navy Commander (Retd) Kulbhushan Jadhav, the officialdom and the media of Pakistan has been on an overdrive in peddling narratives like: “Indian spy admits R&AW destabilising Pakistan”, “Jadhav’s confession is a solid proof of Indian state sponsored terror”. Pakistan’s script does not even spare Iran, in that it accuses Jadhav of carrying an Iranian visa and use its territory to destabilise Pakistan in the garb of business activities.

Significantly, the unfolding of this poorly written Pakistani script coincides with the visit of the Pakistani members as part of the Joint Investigation Team to probe the attack on Pathankot airbase by jihadis owing allegiance to Jaish-e-Mohammad (JeM). The sinister opportunity of the release of Jadhav’s so-called confessional video coinciding the ongoing joint investigation was not lost out on New York Times which called it ‘notable’. It also coincided with the visit of the Iranian President Rouhani to Pakistan. The Pakistani media and the officialdom touted that use of Iranian soil by India for destabilising Pakistan was vigorously discussed during the interlocution with the visiting Iranian President. Pakistan had to eat crow when President Rouhani flatly denied having any such issue being brought up by Pakistan.

With regard to Pathankot probe, Pakistan’s duplicity stands naked before the world, after its master and puppeteer China at the UN vetoed India’s proposal to ban JeM chief Masood Azhar, the mastermind of Pathankot attack. It is now becoming increasingly clear that Pakistan acquiesced to joint investigation under American pressure. It is also now evident that Pakistan tried to target both India and Iran with one salvo.

A very respectable paper, Asia News International, has portrayed the Pakistani script in larger regional perspective. It quotes Senge Hasnan, the Director of Gilgit-Baltisan National Congress: “It is not an issue of India but an issue of Pakistan adjusting itself between Saudi Arabia and Iran’s developing strategic conflict.” Senge further added that the Jadhav affair was a way to ‘embarrass’ Iran and build pressure at a time when Pakistan ‘has to choose a side between Saudi Arabia and Iran.’

It may be recalled that very recently in the second week of March 2016 a massive war game Exercise North Thunder was held in which 20 Sunni majority countries participated. The show of force included 150,000 soldiers, 20000 tanks, 2450 aircraft and 460 helicopters. Most heads of state converged to witness the grand finale of the war game. Both Nawaz Sharif and Raheel Sharif were present. Pakistan’s alacrity and preponderance in the exercise was evident. Amongst others it fielded JF-17 fighters, Karakoram aircraft and SSG Commandos. In December 2015, Riyadh announced a coalition of 34 countries to fight terrorism. Reportedly, Saudi Arabia has mooted a NATO like alliance of Islamic countries which by all indications excludes Iran. There are also reports to suggest that Pakistan has been entrusted to develop the proposed alliance. Also, the nuclear weapons umbilical between Riyadh and Islamabad is well known.

Interestingly even as military Exercise North Thunder was underway, Riyadh signed economic agreements worth $122 million of which $76 million are grants rather than loans. This constitutes the largest official assistance provided by Saudi Arabia to Pakistan in last five years. As per some reports the non-official gift could be as much as $1.5 billion in March 2014. Apart from energy imperatives Islamabad’s other economic vulnerability vis-à-vis Riyadh is the 1.5 million Pakistanis working in Saudi Arabia and their remittances.

Hence, the spy in Commander Jadhav has been created to enable Pakistan military-intelligence establishment to leverage Iran and India with the duplicity it has honed over the years.

The world community has dismissed Pakistan’s latest spy script with the disdain it deserves. The civilized world now knows the wont and make of Pakistan. Pakistan it knows has nurtured three types of Taliban i.e. Tehrik Taliban Afghan, Tehrik Taliban Pakistan (TTP), and euphemistically speaking Tehrik Taliban Pakistan Military (TTPM). The last one in fact is the progenitor of the other two. Realist countries, in pursuance of critical strategic or security interests ignore the Pakistani PM and whenever they have to deliver a stern message or warning to Pakistan, they do it through the rouge TTPM. The Pakistan Army, given its beholden status to the US has no option but to follow the diktat, but not without duplicity, as in the case of Osama bin Laden.

Analysts and incorrigible optimists saw a glimmer of hope in Pakistan’s unprecedented gesture of admitting the use of its soil in the Pathankot attack. This hope stemmed from the fact that Pakistan has in recent years been buffeted by pernicious blow back of its jihadi narrative. Centripetal jihadi forces killed Pakistani children in an Army school (APS) in Peshawar, and students in Bacha Khan University in Khyber Pakhtunkhwa. Pakistan, as per Global Terrorism Database prepared by University of Maryland in US, covering period between 1970 and 2014, has the highest killed in any country (450) in school attacks. There were some 850 attacks on places of learning. The rate of attacks increased alarmingly in the run up to APS massacre. Fortunately, most of these attacks were not lethal. 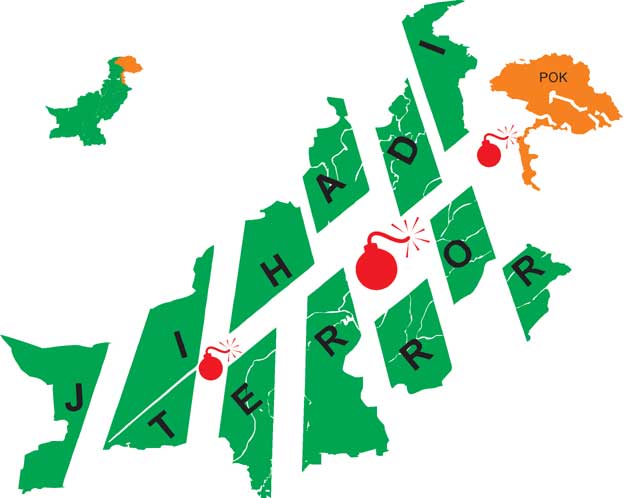 The kidnapping industry in Pakistan, an off-shoot of Jihad, has not spared the powerful and the mightiest. Its victims include son of former Prime Minister Yosuf Raza Geelani who continues to be in custody; the son of former Punjab Governor Salman Taseer who has recently been released after four years of captivity; son-in-law of Chairman of Joints Chief of Staff Committee; and Pakistan’s ambassador to Afghanistan. The release of the latter three cost substantial ransom money, and so is the case with all jihadi abductions which are endemic and not even reported by the families of the victims. It is rather surprising that some very high profile kidnappings have been done in Punjab and the victims have been sold and resold in FATA as well as Afghanistan.

The internal threat levels in Pakistan have become so pernicious that the dispensation had to embark on a National Action Plan (NAP) to fight terror. Under the plan, military courts have been set up by a constitutional amendment. The military courts have so far awarded 61 death sentences and four life imprisonments.

The security map of Pakistan presents a grim picture. Karachi is under the control of Pak Rangers, there is the ongoing Zarb-e-Ajb operation in FATA and parts of Khyber Pakhtunkhwa, and now the military had to intervene to control the situation in Punjab following the judicial hanging of Mumtaz Qadri, the assassin of Governor Salman Taseer. Entire Pakistan seems to be combusting. It seemed that for sheer survival Pakistan had begun to introspect.

In February this year, the Parliamentary Standing Committee on Foreign Affairs cautioned the government against giving support to armed struggle in Kashmir and confine itself to moral and diplomatic support. But the Chinese refusal to impose sanctions against Jaish-e-Mohammad and its chief Maulana Masood Azhar has belied all such hopes. That China, which is a victim of unrelenting jihadi terror from Uighur Muslims, went against the other 14 members of the Security Council is a reflection of the emerging China-Pakistan axis that the world, and particularly India, in the two-front context, will have to deal with.

The China-Pakistan Economic Corridor (CPEC) is generating new dynamics. Baluchistan and Kashmir are critical to this corridor. They envisaged Chinese strategic ingress in Baluchistan is bound to upset Iran given that Baluchis straddle the Pak-Iran border, approximately 900 km. The Baluch–Brahui culture is common to Baluchistan of Pakistan and Baluchistan of Iran just as the Afghan–Pushto culture transcends the Durand Line separating Afghanistan and Pakistan. This is indeed vulnerability for Pakistan. The Pakistan part of Baluchistan has been smouldering at least since 70s. It was because of the precarious situation in Baluchistan in 1974 that the Pak Army bounced back to the super power status within the country because the then Prime Minister Zulfikar Bhutto had run out of all options. After the 1971 war, Bhutto to a large extent had circumscribed the military. When asked to deploy in Baluchistan, the Pak military blackmailed to get its numero uno position.

The 989 km long Persian Gulf is critical for Iran as it covers most of the northern coast and serves as the economic life line for the country. Extra regional powers like the US too have heavy presence in the region. Any kind of Chinese presence, direct or indirect, in Gwadar is certainly not a welcome proposition for Iran and other players in the Gulf region. The Kulbhushan Jadhav episode and the Chinese veto on Masood should thus be appraised in the larger geopolitical context. The desperation to somehow nab an Indian from the Chabahar port or waters to browbeat both India and Iran is now evident.

These deceitful tactics or measures only accelerate Pakistan’s implosion. Pakistan’s inability to alter the jihadi narrative is pushing the country towards disintegration. A situation may arise when the ongoing China-Pakistan economic corridor project splinters because of vivisection of Pakistan. Nations and civilizations have perished not because of external pressures, but because of implosions.

Ironically, Pakistan which mutilated Saurabh Kalia and beheaded Hemraj has now released a doctored video, in which questions are being posed to Jadhav in benign and humorous manners, and the replies are also in the same tenor. No such video was released when Osama bin Laden was enjoying Pakistan’s hospitality. The Raymond Davis affair exposes the duplicity of Pakistan. In 2011, Davis, a CIA operative posted at Lahore Consulate, killed two Pakistanis. The authorities refused to grant him diplomatic immunity and put him in jail. No such video was made then. The Americans threw a sum of $2.4 million as compensation money and Davis was honourably released. Pakistan, which refused to own-up Ajmal Kasab and even its soldiers in Kargil, is now drumming the Indian ownership of Jadhav. Following Jadhav’s so-called confession, the ‘India destabilizing Pakistan’ theory is being peddled with great fervour.

Who is destabilizing Pakistan? It is the jihadis and their suicide bombers. The same suicide bombers, who killed Benazir Bhutto, who killed children in APS, who killed students in Bacha Khan University, who attacked Marriott Hotel in Islamabad, who killed Ismaili Shias, who attacked the ISI headquarters, nuclear establishments, airbase and naval base and more recently who killed innocent people in Iqbal Park in Lahore even as the Joint Investigation Team was investigating the Pathankot attack. Most attacks in Pakistan and India have been by suicide jihadi teams. Is India and Iran producing these suicide bombers? They are incubating in various madrasas of Pakistan.

Over the years, Pakistan has been reduced to such a hell that young men are prepared to be suicide bombers to seek refuge on an imaginary other world, where amongst other bounties they would be provided with 72 virgins.

Destruction is staring at Pakistan.