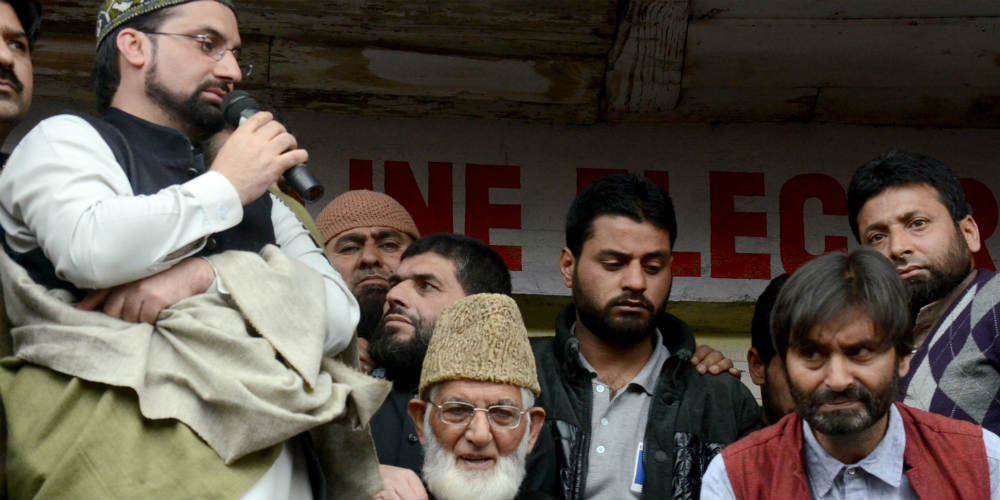 The Hurriyat is in docks. The houses and properties of the leaders and their associates have been raided. It has yielded a mountain of evidence and proof of culpability, blatant criminality and anti-national conspiracies of the Hurriyat leaders. This includes: waging war against the nation, fomenting global jihad in Kashmir, terror financing and use, misuse and abuse of children in furtherance of Pakistan sponsored proxy war.

Despite all the evidences, which, as it is was well known for at least three decades, there is a segment in India comprising of politicians, lawyers, social activists, ex-ministers and a retired air force officer making frenzied overtures and reach-out to the Hurriyat leaders and the Pakistan Embassy. The swathe and the penetration of the Hurriyat network are intriguing!! The Hurriyat, as it is now well-established, is the operative lynchpin of terror and proxy war apparatus in Kashmir and has its tentacles to Islamabad, the General Headquarters of the Army at Rawalpindi, Pakistan Embassy in Delhi and jihadi groups based in Pakistan.

Several encounters in the recent past have busted the myth about stone-pelting as a spontaneous vent to frustration in the Valley. In the recent encounters, the latest being the elimination of Abu Dujana, the stone-pelters have been seen to be tactically used to prevent reinforcements or distract the security forces to enable the jihadis to escape. The same tactic of preventing reinforcements was witnessed when jihadis belonging to the LeT killed six policemen in Anantnag in July, and riddled their faces with bullets. Yet, there is a segment in Kashmir and in Delhi, which supports both stone-pelting and the Hurriyat leaders. This segment of so-called prominent people or persons of standing also includes the mainstream political leaders of Kashmir belonging to the National Conference and the PDP. These mainstream parties engaged in the electoral process are also one-dimension of the proxy war apparatus.

Proxy war cannot succeed without a well-oiled proxy machine in the target country. It is inexplicable that in a state or part of Indian territory ruled by a democratically elected government, an unconstitutional grouping like the Hurriyat should be enjoying such secure patronage and lavish indulgence. The fear and respect that Hurriyat commands amongst its patrons is unbelievable. The network that sustains the Hurriyat now appears to be nervous and on an overdrive. The so-called promoters of Hurriyat, these wily persons of social and political standing have exposed themselves in the aftermath of the crackdown. It should be remembered that e world over it is the ‘people of standing’ who are subverted by the inimical powers, in this case it is Pakistan and lately China.

The moot question that we Indians should address is why is Pakistan waging a proxy war on India? It is definitely not for love of Kashmiris or Kashmiriyat, definitely not for the love of Vaishno Devi and definitely not for the love of the Buddhist Shrines in Ladakh. In the war of 1947-48, in 1965 it did not send its tribal marauders, who were also Muslims, to assimilate the Kashmiri Muslims. Had it been so, they would have never indulged in wanton rape and loot of Kashmiris. Pakistan did not attack Kargil because it wanted to assimilate the Shias of Kargil. All that Pakistan is interested in is the territory of J&K. There are only territorial connotations to the whole of Kashmir issue and nothing else. If the matter was not one of territoriality, Pakistan would have not seeded 5180 sqkms of territory of POJ&K to China. It would have not played with the demography of Shias in Gilgit-Baltistan, and it would not have allowed the China-Pakistan Economic Corridor (CPEC) to destroy that pristine region.

The Hurriyat leaders, the main-stream political parties in the Valley and ‘the people of standing’ are only furthering the territorial ambition of Pakistan and now China with full realization and consciousness. It is curious rather entertaining to see a deafening silence by the Hurriyat and the other Pakistan apologists regarding the strategic inroads made by China in the POJ&K. The Pak apologists, steeped as they are in Wahabi Islam, refuse to make a whisper of comment regarding the banning of burqas and beards in Xinjiang province of China. It is clear that they are catering and struggling for the territorial and strategic agenda of Pakistan and China.

If the CPEC unfolds as envisaged, POJ&K could turn into the new frontier for China, just as as Mao marched into a new western frontier in 1949 and named it Xinjiang. Recently at a meeting to decide locations of SEZs under the CPEC representatives of Gilgit Baltistan and truncated POJ&K, what Pakistan calls Azad Kashmir, made an impassioned presentation to the Chinese regarding their water and mineral resources potential and their respective significance in the ancient Silk Route. Each was trying to outdo another. So the question arises that those who claim to be struggling for entire J&K, how can they justify selling (euphemistically speaking) the land under their occupation to China? And when China is defacto purchasing land in POJ&K, how can it talk of mediation? Do the people of the Valley want that the remainder land of the J&K should also be sold to the Chinese?

If the Kashmir is consider the Valley as the heart of J&K, how can they then acquiesce to the rest of the limbs being torn between Pakistan and China? The fact that Pakistan and China are jointly exploiting J&K, illustrates that the matter is not one of Islam or Jihad, but it is a religious ploy to capture territory.

The issue is strategic and the objective is territory, hence Article 370 has no meaning.

It is not co-incidence that the China has been making statements regarding its third-party status on J&K. Apart from several other strategic objectives, the Chinese posturing in Doklam is to create a counter-pressure point with regard to J&K, because India has been questioning the legitimacy of CPEC, traversing through a territory that is Indian in every sense. J&K is therefore not an issue, neither a problem. It is plain and simple greed for territory by Pakistan. It wants the territory because of the rivers. It is not contend with the Indus Water Treaty. It wants to control all the rivers. It covets the territory so that the J&K could be turned into a vassal region of China. It covets the territory to decapitate India.

Therefore the stark truth is that the proxy war of Pakistan has solely territorial objectives, and Jihadi variety of Islam is tool because the Pakistan military can only afford another conventional misadventure at the cost of further vivisection of Pakistan.

Since the J&K matter is a war by proxy for territory, it is our duty to defend every inch of our sacred land, and in that endeavour proxies such as the Hurriyat and its wings of all hues should be treated as enemies of India.