This series by veteran investigative journalist, VK Shashikumar, will raise questions on the law enforcement’s investigation of Lt Col Prasad Shrikant Purohit’s alleged involvement in the 2008 Malegaon terrorist bomb attack case. It will bring into public focus new documents unravelling a disturbing plot to severely undermine the apolitical institutional stature of the Indian Army and the morale of its soldiers and officers.

In January 2008 the United Progressive Alliance government led by the Congress Party & the then Army Chief, General Deepak Kapoor and the entire Army Chain of Command from the Southern Command Headquarters, Pune to Army Head Quarters, Delhi were presumably aware of the activities of ‘Abhinav Bharat’ and Sudhakar Chaturvedi – Charge Sheeted Accused in Case No. RC – 05/2011/NIA/DLI.

“Photocopy of two pages discreetly recovered from the notepad of Mr. Sudharkar Chaturvedi @Chanakya who is one of the most active members of the group (Abhinav Bharat)…The group is an extremist neo Hindu fundamentalist group with an aim to unite all Hindus and build a pan Hindu identity to establish a new nation order based on principles of Veda” – Confidential Report of 3 Det SCLU, C/0 56 APO 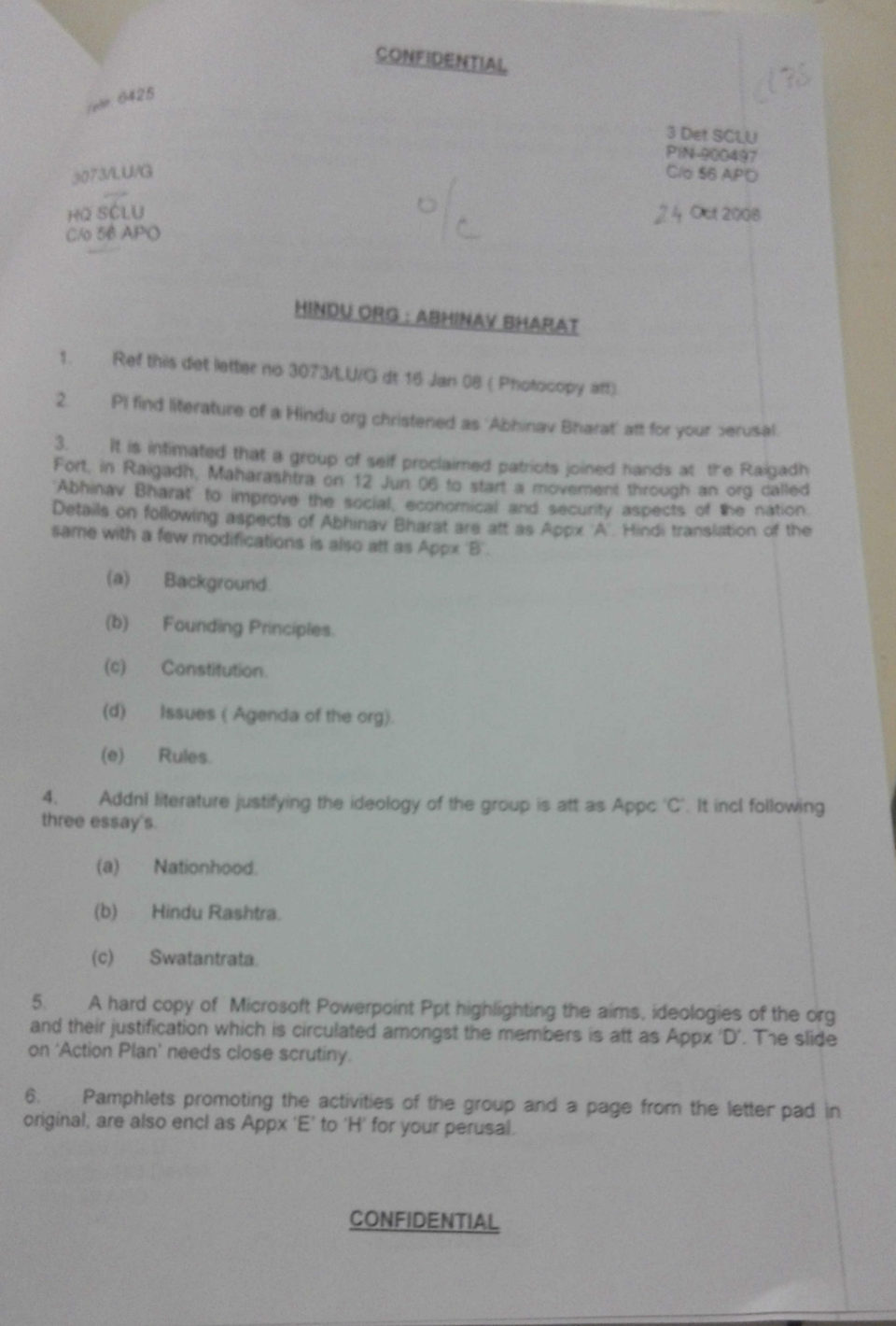 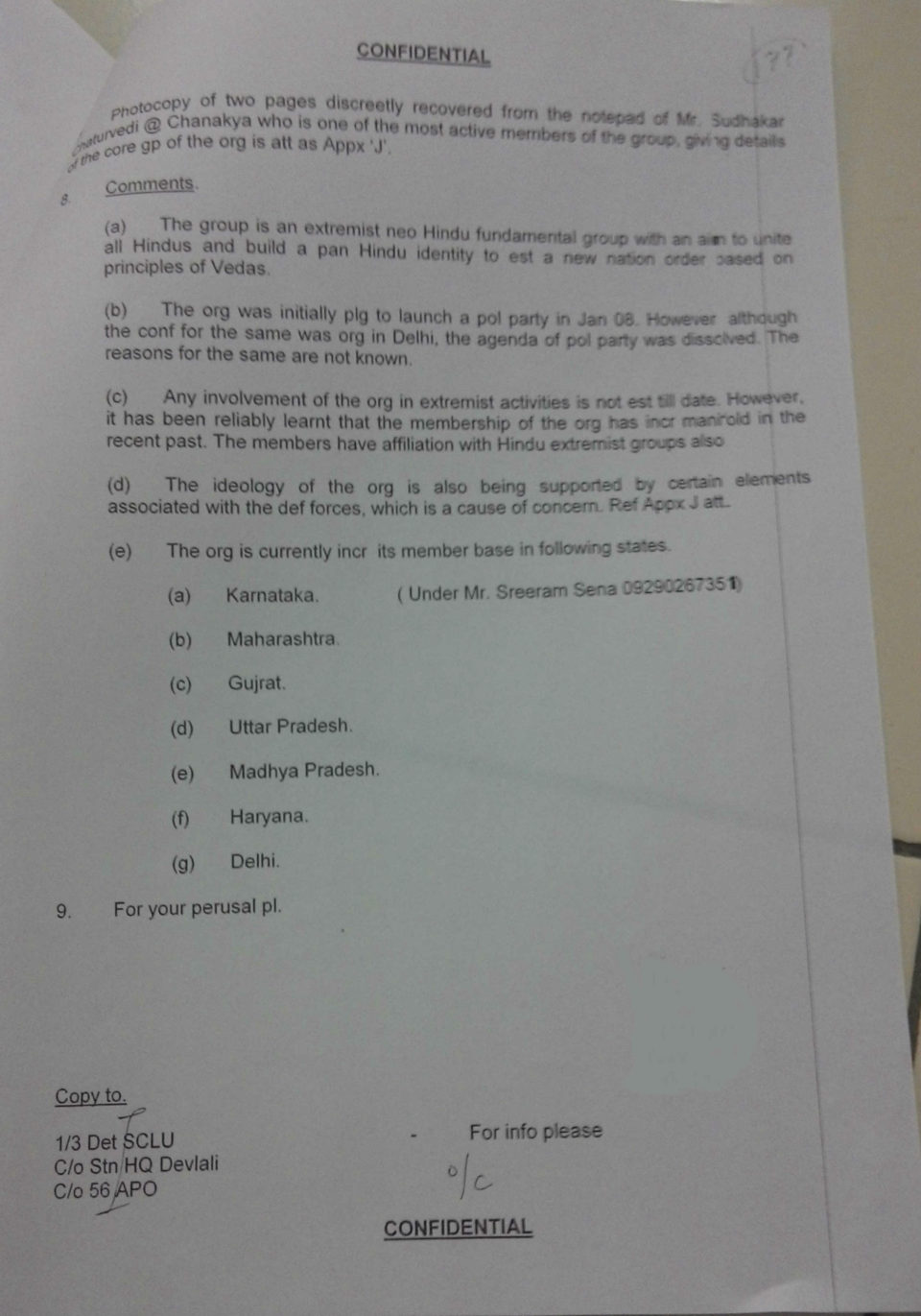 Nine months before the Malegaon improvised explosive device (IED) exploded on September 29, 2008 the Southern Command of the Indian Army and the Army Headquarters received a top-secret confidential memo titled “Hindu Org: Abhinav Bharat”. On 16 January 2008 the 3 Detachment of the Southern Command Liaison Unit (SCLU), Devlali near Nashik, dispatched a letter “Det Letter No. 3073/LU/G”. The content of this letter as a photocopy annexure along with fresh intelligence inputs was dispatched again on October 24, 2008 within a month of the Malegaon blast.

Here’s an excerpt from the top-secret intelligence briefing:

“It is intimated that a group of self-proclaimed patriots joined hands at the Raigadh Fort in Raigadh, Maharashtra on 12 June 06 to start a movement through an org called Abhinav Bharat to improve the social, economical and security aspects of the nation. Details on the following aspects of Abhinav Bharat are attached as Appx ‘A’”

The confidential memo then goes on to describe in detail the background, founding principles, constitution, rules, agenda of the organization and its plans to build a Hindu Rashtra. The confidential intelligence report dispatched to Southern Command HQ and Army HQ clearly indicates that the 3 Det SCLU had very effectively penetrated Abhinav Bharat through covert operations and was generating actionable intelligence literally from the horse’s mouth.

So, who was this first-hand primary source from whom the 3 Det SCLU was gleaning so much information on the activities of Abhinav Bharat and its links with other Hindu Right Wing extremist organizations?

The primary source of Devlali based military intelligence unit – 3 Det SCLU – was none other than Sudhakar Chaturvedi, who according to the National Investigation Agency (NIA) was the national coordinator of Abhinav Bharat and has allegedly admitted to his role in staging the Malegaon terror attack. This is evident in the top secret intelligence briefing titled – “Hindu Org: Abhinav Bharat”.

In fact, it’s not just this intelligence report that the 3 Det SCLU generated. So deep and professional was this unit’s covert penetration and embedment with Hindu Right Wing groups that it was generating copious amounts of actionable intelligence much before the Malegaon IED blasts. Every piece of intelligence this unit generated was regularly sent up the chain of command to Army HQ. Is it conceivable that the then Army Chief, Deepak Kapoor, UPA Defence Minister AK Antony and the Congress Party top brass (given that Sonia Gandhi as Party President was pro-actively involved in UPA I & II governance matters) were completely unaware of these reports?

If the military intelligence reports of 2008 did not reach the key decision makers in the Army HQ and UPA Government then it would point towards significant dereliction of duty, breach in the chain of command and abnegation of the civil – military systemic procedures regarding processing of intelligence information. But if the UPA government was aware of intelligence reports on the Hindu fundamentalist organization, Abhinav Bharat, several months ahead of the September 29, 2008 Malegaon blasts, then why wasn’t any pre-emptive law enforcement action initiated against an organization whose activities were already under the scanner?

In fact, the intelligence reports from January 2008 indicate that till the Malegaon blasts in September 2008, Abhinav Bharat had managed to keep a low profile, even though there were worrying signs – like increasing membership across several states within few months and involvement of “certain elements associated with the def forces”.

But what if the UPA government knew about these intelligence reports in 2008 but did not take cognizance of it? Clearly, only those serving in the Union Government at that time can authenticate whether decision makers knew about these reports or not. But the explosive truth contained in the intelligence files of the Army HQ is a matter of record and cannot be whitewashed. Given the nature of intelligence unearthed by 3 Det SCLU it’s extremely hard to ignore the fact that this was the unit in which Lt Col Purohit served!

Therefore, it’s instructive to note the content of the October 24, 2008 intelligence briefing on Abhinav Bharat, which also recapped the briefing of January 16, 2008.

“A hard copy of Microsoft Powerpoint Ppt highlighting the aims, ideologies of the org and their justification which is circulated amongst the members is att as Appx ‘D’. The slide on ‘Action Plan’ needs close scrutiny. The orgn was initially planning to launch a political party in Jan 2008. However, although the conf for the same was org in Delhi, the agenda of pol party was dissolved. The reasons for the same are not known…Any involvement of the org in extremist activities is not est till date. However, it has been reliably learnt that the membership of this org has increased manifold in the recent past. The members have affiliation with Hindu extremist groups also…The ideology of the orgn is also being supported by certain elements associated with the def forces, which is a cause of concern. Ref Appx ‘J’ att.”

The military intelligence reported increase in the membership of Abhinav Bharat from the following states – Karnataka, Maharashtra, Gujarat, UP, MP, Haryana and Delhi. So how could the entire intelligence establishment under the UPA government completely miss acting on such explosive intelligence?

However, before exploring the above question on the basis of facts available at this point in time it is equally important to ask other questions – first, how did the 3 Det SCLU get such critical first-hand information, which otherwise would have been the preserve of the Intelligence Bureau under the Ministry of Home Affairs and second, who set up the covert operations of 3 Det SCLU to penetrate fundamentalists right wing groups, create “int assets” (primary sources) and glean high quality actionable intelligence?

Sixty Army officers testified in the CoI. Except Col RK Srivastav, all the other 59 officers testified in favour of Lt Col Purohit. Col Srivastav’s negative testimony was anyway a foregone conclusion because he was specially and specifically deployed from the Army HQ in 2008 to surreptitiously detain, illegally interrogate and fraudulently hand over Lt Col Purohit to Maharashtra ATS. This is another disturbing story and will feature later in ‘The Malegaon Mystery and its Big Little Lies’ series. For now it is important to focus on the Army’s CoI report on Lt Col Purohit.

All the 59 Army witnesses in the CoI testified that Lt Col Purohit was a competent intelligence officer who excelled in field operations. They affirmed that one of the sources he had cultivated was Sudhakar Chaturvedi, national coordinator of Abhinav Bharat, who is an accused in the Malegaon blast. They testified that Sudhakar helped Lt Col Purohit to infiltrate Abhinav Bharat and other Hindu right wing fundamentalist groups. When the Malegaon blast happened, Purohit was attending a course on learning Arabic language at the Army Education Corps Training College and Centre at Panchmarhi in Madhya Pradesh.

Here are some snapshots from the recorded statements of Army officers submitted in the Court of Inquiry:

In the context of the revelations contained in the confidential military intelligence memo dated October 24, 2008 it is beyond doubt that the intelligence network of ‘3 Det SCLU’ in its Area of Responsibility set up by Lt Col Purohit was generating massive amounts of intelligence on Abhinav Bharat. It is also clear that Sudhakar Chaturvedi, an accused in the Malegaon blast, was a primary source of intelligence cultivated by Lt Col Purohit which enabled further penetration into other Hindu Right Wing groups. All of this information was being processed at the unit level, documented and regularly dispatched up the chain of command. It is clear from the testimony of Army officers under whose command Lt Col Purohit worked held him in high esteem and was aware of his covert operations. It is also clear that he had high level clearance and was mandated to conduct covert operations to penetrate into groups like Abhinav Bharat.

Lt Col Purohit told the Court of Inquiry: “I must make a mention here that out of the vast int (intelligence) network development by me with great efforts I came to know about the likely involvement of some Right Wing leaders in anti-national activities. The inputs received on 12 October 2008 were immediately fwd (forwarded) to then CO (commanding Officer) SCLU (Southern Command Liaison Unit) Col Panchpore.” This was subsequently confirmed by Col Panchpore in his statement before the CoI.

How is it possible that the person whose covert intelligence operations generated significant actionable intelligence on Abhinav Bharat nine months before the Malegaon blasts of September 29, 2008 suddenly find himself to be a co-conspirator of a terror attack? The Maharashtra ATS claimed he was a Trustee of Abhinav Bharat, which was suspected to be involved in planning and execution of the bomb blasts. In April 2011, the National Investigation Agency (NIA) took over the case from Maharashtra ATS. Five years later, on May 13, 2016 NIA filed a charge sheet against 10 accused, including Lt Col Purohit who was booked under Unlawful Activities (Prevention) Act, Indian Penal Code and Explosives Substances Act. But why hasn’t the NIA investigated the intelligence briefings sent by 3 Det SCLU and what action was taken on these briefings by the UPA Government and Army HQ?

For the past 8 years as a pre-trial detainee under the Maharashtra Control of Organized Crime Act (MCOCA), Lt Col Purohit consistently repudiated the charge of the Maharashtra ATS that he was the alleged “mastermind” of the Malegaon bomb blasts. He has consistently held his ground that as an intelligence officer he was tasked to infiltrate “Hindu Right Wing” extremist groups and he accomplished his mandated task as a professional intelligence officer is expected to do. He has maintained all along, since his arrest, that he was only doing his job as mandated and approved by his superiors in the Army’s institutional chain of command.

All the questions raised above are embedded in a landscape fraught with moral, legal and operational perils. Lt Col Purohit’s story is uncannily similar to a fictional CIA agent featured in Alex Berenson’s novel ‘The Midnight House’ in which the agent converts to Islam to infiltrate the Taliban. The moral limits of such covert operations guided by larger political motives and objectives are hazy. An intelligence operative on the ground is unaware of political machinations and expediencies which are always disturbingly outside the public gaze. Lt Col Purohit’s real life story throws up this conundrum – Are there moral limits that those mandated with gathering intelligence dare not cross?

Was Lt Col Purohit set-up as a pawn in a political game of thrones and exploited by the political establishment, supported by a malleable, pliant Army leadership in 2008?