If the Maharashtra government were to resuscitate its Anti-Terrorism Squad’s (ATS) 1020-page chargesheet filed 7 years ago against six members of two Hindu extremist organisations, the Sanatan Sanstha and the Hindu Janjagruti Samiti (HJS), for setting off bomb blasts in Thane, Vashi and Panvel, a stunning narrative of what fringe, violent extremist Hindu outfits were planning to unleash would have been crystal clear. Prime Minister Narendra Modi and National Security Advisor, Ajit Doval, cannot turn their attention away from this hard reality just as the Congress-led UPA government did during its tenure. The Sanatan Sanstha has influenced the thinking of all extremist Hindu fringe organizations; from Bajrang Dal to Shiv Sena to Sri Ram Sene. Its narrow, communal, dogmatic, non-inclusive and violent extremist interpretation of Hinduism is bound to politically impact the Bhartiya Janata Party (BJP) adversely. The BJP must firmly position itself on the side of a plural, multi-cultural India and should even promote a “free” debate on the nature of communalism in India.

The fact is that India and its citizens have lived through horrible communal tragedies when BJP did not have any presence in India’s political landscape — the terrible riots in Uttar Pradesh and Bihar, the 1984 massacre of Sikhs. The BJP transformed the hidden communalism embedded in Congress politics into a hardline Hindutva virulent strain. However, with the political ascent of the BJP over the last two decades it is important for the ruling party to nullify the unintended consequences of its successful mobilization of its largely Hindu electorate, namely making extremist, fringe leaders like the 60-year-old man Dr Jayant Balaji Athavale, irrelevant by ensuring that the law enforcement agencies are allowed to do their job to book these promoters of hate and violence.

BJP should not rely on the counter-argument of questioning the obvious instances of the Congress and other political parties’ expedient use of communal politics. For instance, the silence of Congress and Left parties in Kerala when Muslim extremists of the Popular Front of India chopped the hand of a Christian professor for his alleged defamation of the Prophet. Instead, the BJP can demonstrate its intent to preserve and protect the liberal, progressive, democratic basis of the Indian Constitution by stamping out communalism from its pantheon of supporters. This will win BJP more support and create the space for focusing the country’s attention on its development agenda.

Hindus don’t need self-proclaimed defenders of Hindu faith like the Sanatan Sanstha, which promote extremism and violence in the name of Hindu religion. All the documents revealed in this Canary Trap investigation have been written by Athavale and the theme is most of these books is defence of Hinduism, which is portrayed as being under threat from so-called evil doers, Christians, Muslims and secular Hindus. The text on ‘Spiritual Practice of Protecting Seekers and Destroying Evildoers’ or Kshatradharma Sadhna contains the core beliefs of Sanathan Sanstha. In a rabid and 44 volume series titled ‘Science of Spirituality’ Athavale says defending the faith against anti-Hindu forces, the evil doers, “is the highest form of spiritual practice” 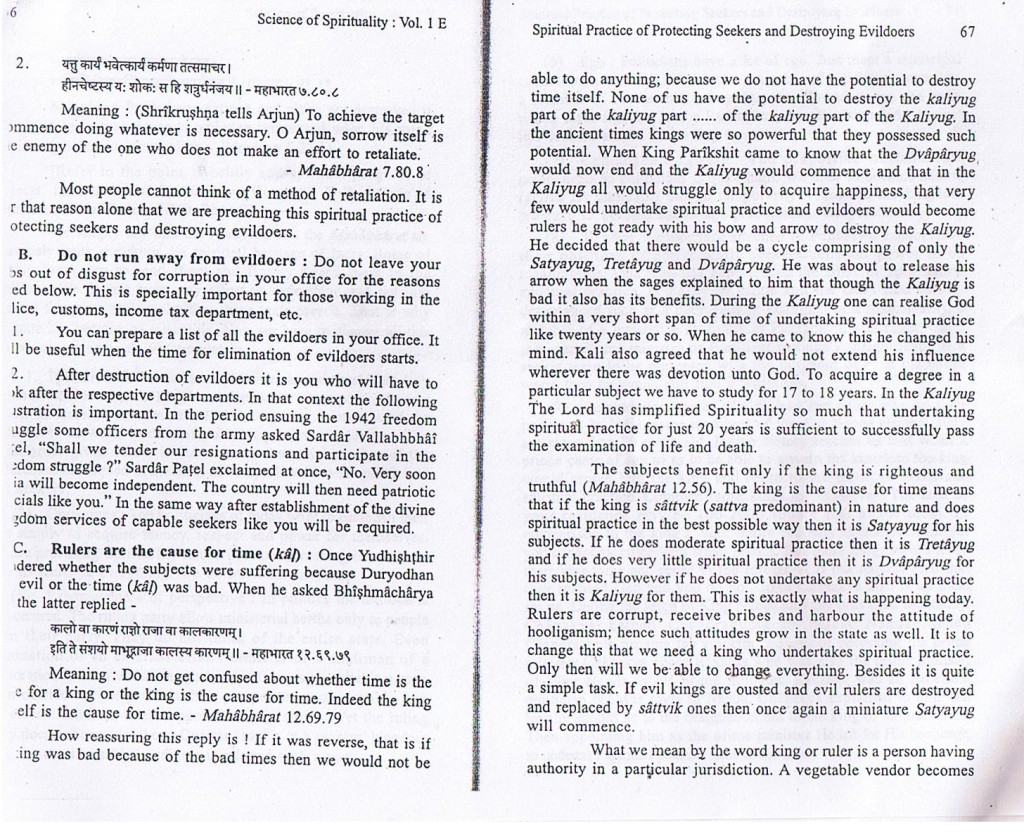 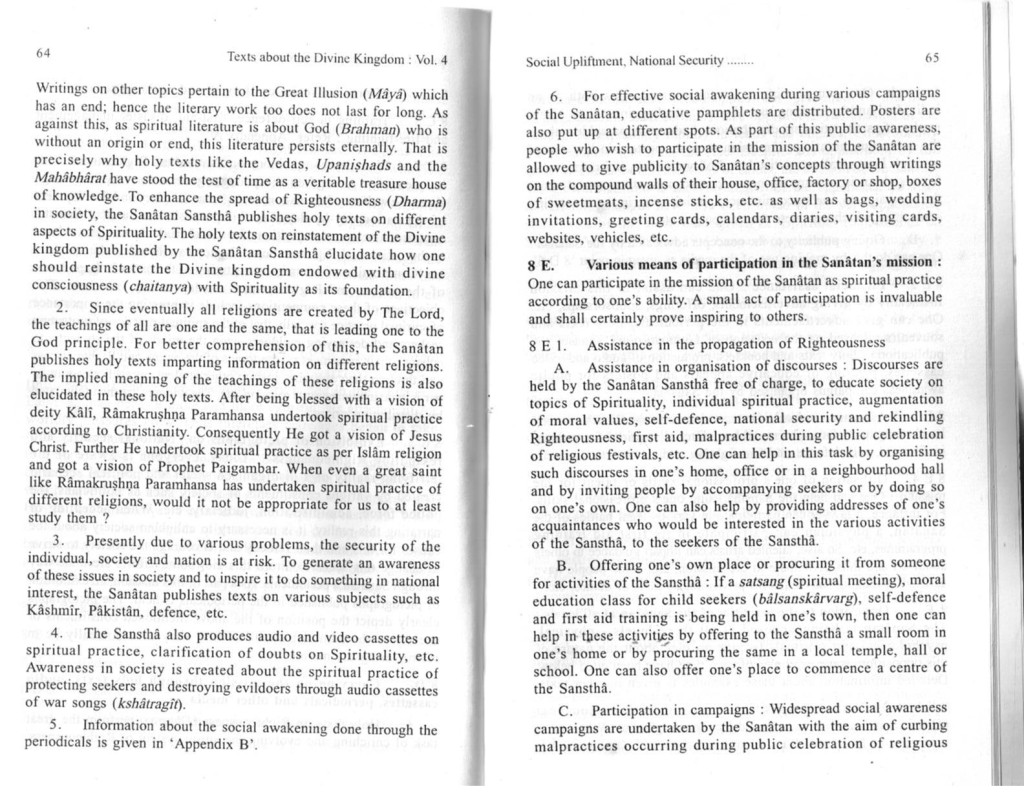 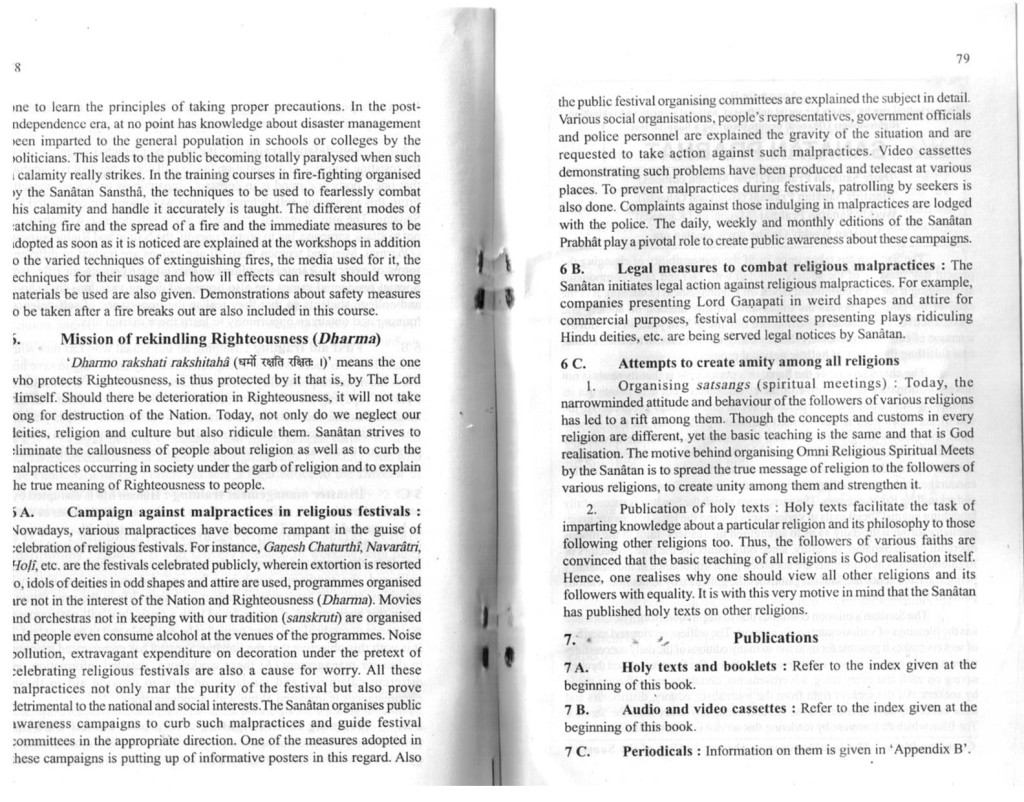 It is surprising that Athavale has escaped the long arms of the law even when he produced an array of crazy violent rantings through his books with proclamations such as “We will wage a war for Righteousness” — (Source: ‘Science of Spirituality: Vol 1E, Spiritual Practice of Protecting Seekers and Destroying Evildoers, Page 64). In fact, Athavale made a “timetable of spiritual practice for a successful Dharmayudh or religious war” to establish what the followers of Sanathan Sanstha believes will be a “Divine Kingdom”. Athavale is no different from the violent men in Pakistan leading Jehadi terror organizations targetting India. This is Athavale’s time-table for waging war against “evil-doers” (rationalists, Muslims, Christians and Hindus who don’t follow their dictates): 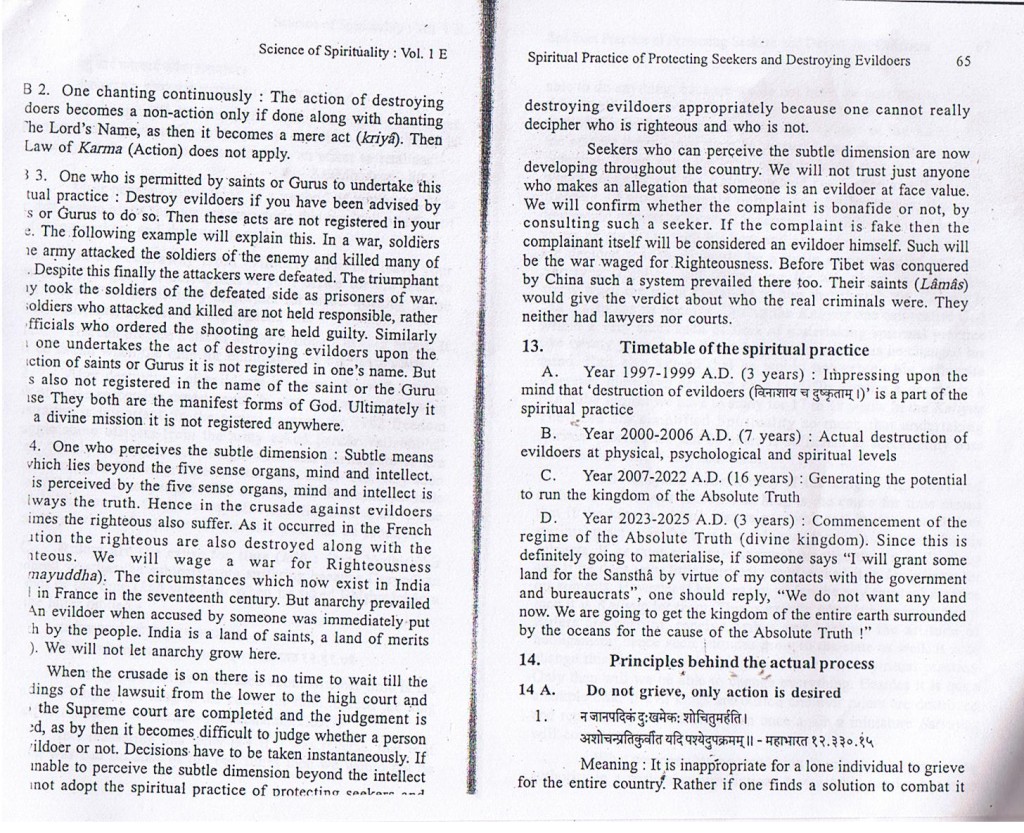 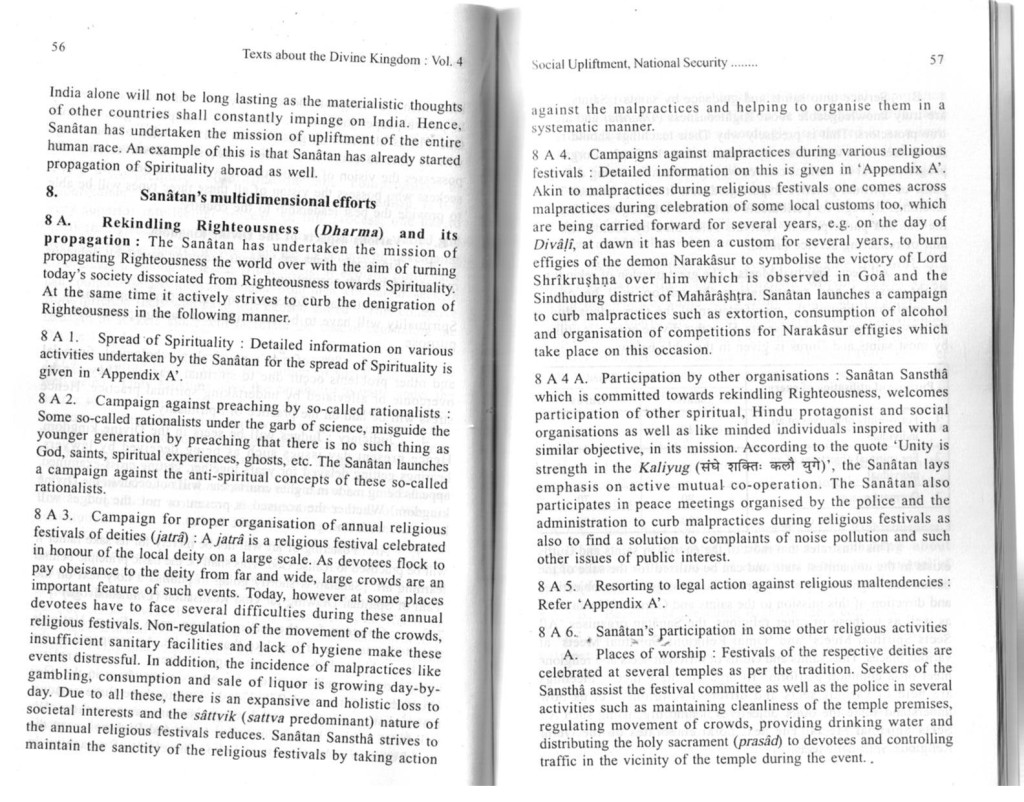 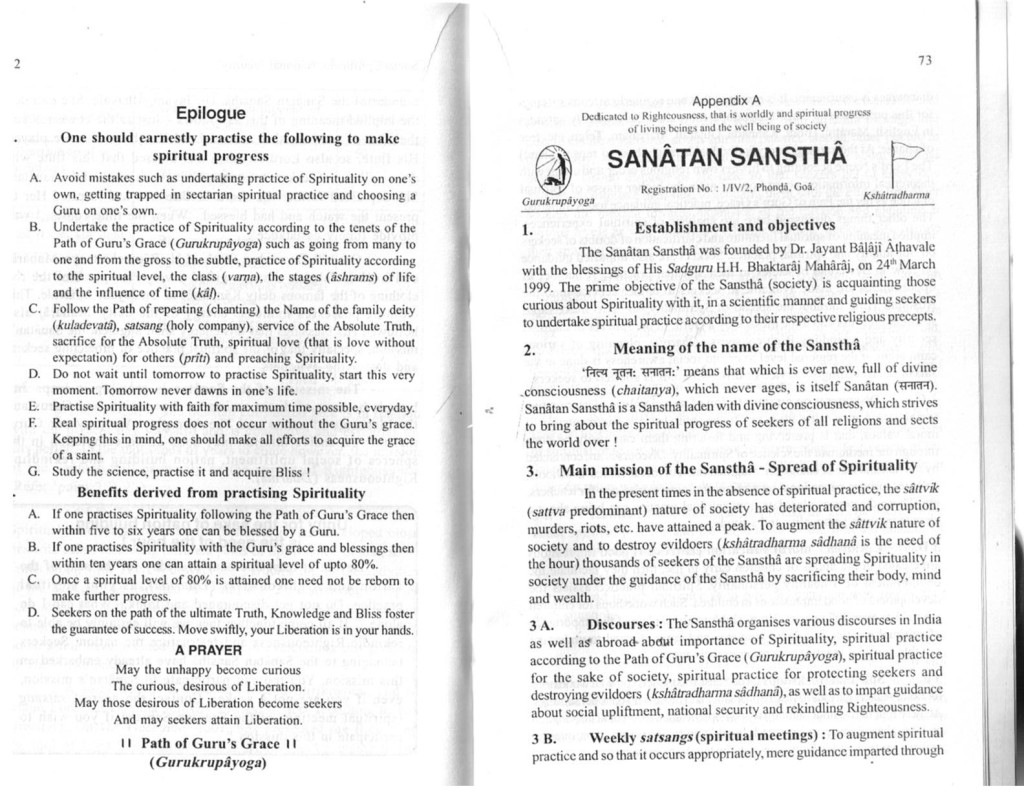 Meanwhile, at the Panvel centre of Sanatan Sanstha, the “believers” pray as they walk in circles around the vehicle of Athalave’s spiritual guru, Bhaktaraj Maharaj, to receive what they believe to be “spiritual vibrations”. One wonders whether these are the same people who read and believe in Sanathan Sanstha’s hate literature. The organization’s newspaper, Sanatan Prabhat, printed by a trust associated to the Sanstha publishes articles and cartoons derogating other religions. Christian priests are depicted with horns, indicating that they are devils. Communal riots were sparked off in many parts of Maharashtra in November 2005 when Sanatan Prabhat published a derogatory article on the Prophet. Sanathan Sanstha is a fringe extremist organisation, but its rabble rousing activities polarizing communities seems to be getting backhanded support from other Hindu fringe organizations. Groups like the Bajrang Dal, Shiv Sena, and MNS in Maharashtra have not hesitated to share the same platform with Sanathan Sanstha. There are photographic evidence of even some RSS leaders sharing the same platform with Sanatan Sanstha.

Therefore, it is critically important for the BJP and the RSS to distance itself from fringe, violent, extremist groups such as the Sanatan Sanstha. Otherwise, BJP will slide into pockets of influence in some states and will lose its pan-India appeal as a party with a difference focused on development and deepening a meaningful democracy for India’s citizens. If BJP is perceived to be supporting the philosophy of Sanatan Sanstha, then voters are bound to ask at some point in time how the fringe violent ideology of Sanatan Sanstha is different from the jehahi terrorists whom they claim to be opposing.