Few books dealing with matters military have in the recent past had such an impact. David Davidar, the publisher of Aleph Book Company proudly told the packed audience last night at the India International Centre in New Delhi that the first print of the book had sold out within three weeks of it hitting the stands, something that was quite unprecedented in the genre of non-fiction.

“Not at all surprising,” said Dr Subramanian Swamy, a keen China watcher himself and a member of the panel that had come together to discuss the book. Barkha Dutt had dashed back from Pakistan to moderate the conversation that included General VK Singh and the author. “I have been waiting for a long long time for someone to come along and steal a march over Neville Maxwell. Shiv Kunal Verma, I am delighted to say, has done that with this book which surpasses everything else on the 1962 conflict,” said Swamy.

“The book is not only meticulously researched and superbly brought out, Kunal’s style of writing makes it a fluid read. Just a historian couldn’t have written a book like this,” said General VK Singh, the former Army Chief who also went on to command 2 Rajput, the battalion that took the brunt of the first Chinese attack at Nam Ka Chu. “Forget about the Henderson Brooks report which by its very mandate was a limited study,” the General would say later in the discussion, “after this book, you can throw it out.”

Tongue-in-cheek, when asked about leadership in war, the General said, “If you have a lion at the top, everyone will behave like a lion. If your promotion policies ensure that only sheep get to the top, then you will have a flock of sheep.” Goes to show that even though the General is now a politician, his heart will always be that of a blue-blood soldier! 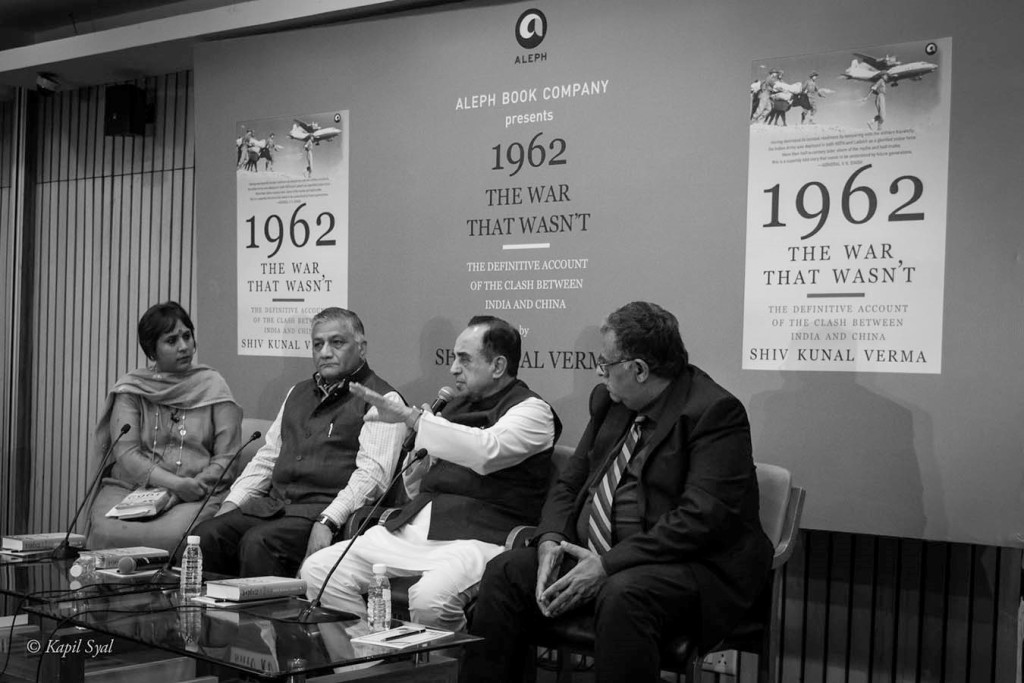 Barkha Dutt was almost perfect in her handling of the three speakers. General VK Singh, forthright and honest, rarely bothering with what was ‘politically correct’; Swamy clinical and precise in his analysis of China and Verma, who in his manner speaks just as he writes – holding back no punches, painting the picture with words supported by facts that few can argue against.

“Why was the IAF not used,” someone from the audience asked the inevitable question. “Because we were scared,” replied Verma, going on to tear not just the IB’s assessment to Nehru apart but also the senior leadership in Air Headquarters for having gone along with an appreciation which was so obviously flawed. “In Korea, when the Chinese fought the US Army, air power was the key. In our case, we had the run of the skies – IAF Canberras were crossing over from the area around the Karakoram Pass, then flying east keeping the Great Himalayan Range to their south, before crossing back into India near the trijunction with Tibet and Burma in the east. They photographed everything, and not once could the Chinese intercept them.”

It was a fantastic event, where every spoken word was lapped up by an informed and discerning audience. I reproduce below the text of Verma’s speech, which set the tone for the subsequent discussion. For those who were not there, and for those who are yet to read the book that is being described by critics as a masterpiece, the author’s speech itself will give you an idea of what this entire book is about: 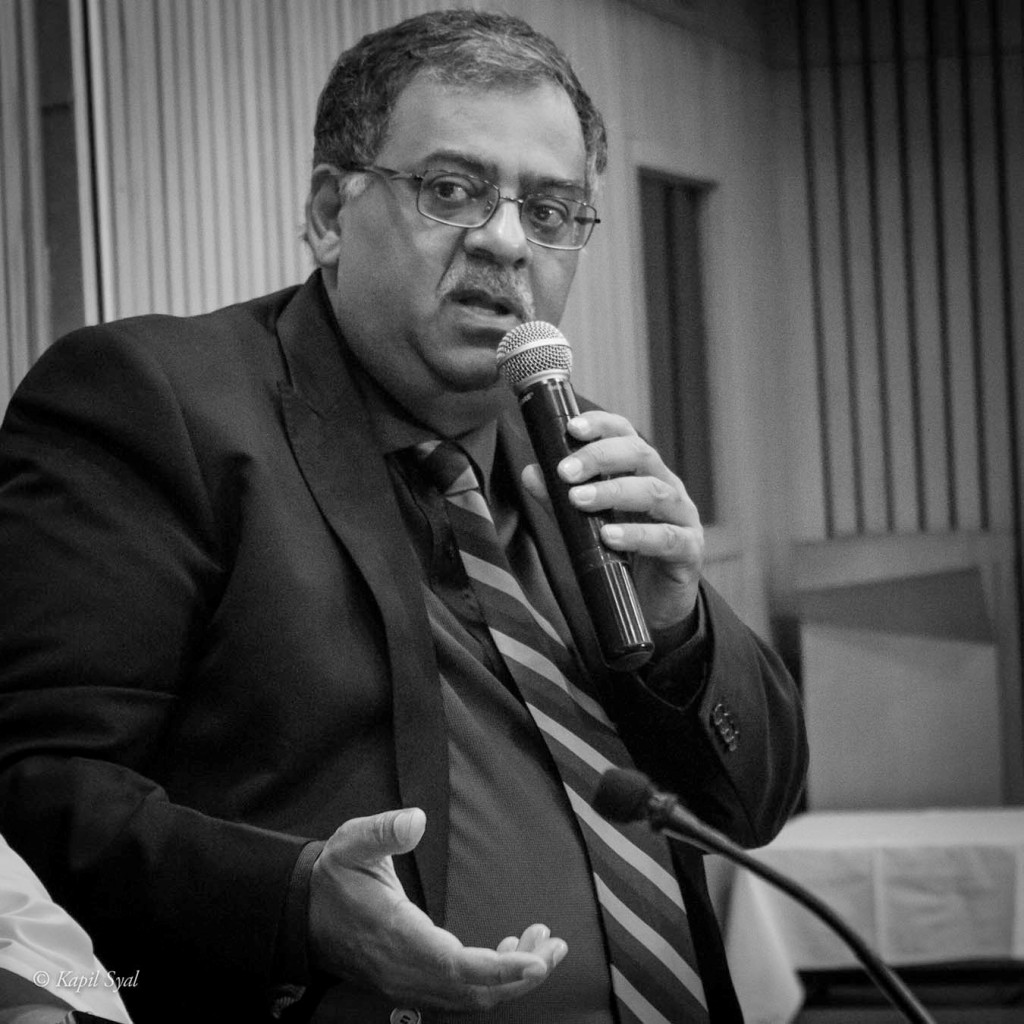 Exactly one week ago, ten soldiers from 19 Madras were trapped just below Bana Post on the icy heights of the Saltoro ridge that separates the Siachen Glacier from Pakistan’s Northern Areas… This morning, the country awoke to a miracle for one of the men, Lance Naik Hanamanthappa Koppad was dug out alive by his comrades who just refused to give up. The sheer doggedness and resilience of not just the man who was buried under 25 feet of packed ice, but the courage and persistence of his fellow soldiers needs to be saluted by all of us, for to dig relentlessly at 19000 feet in temperatures close to minus 40 degrees is actually beyond human comprehension…. I’m sure every person in this hall tonight sends out his and her silent prayer for the soldiers recovery, just as we also mourn the loss of the other nine soldiers who died doing their duty…

Fifty-three years ago, we also lost a whole lot of men… soldiers and young officers who were the cream of our Army… Just like the countless men who have constructed and manned the defences at Siachen over the last twenty-five years to protect our country, the troops in the early 1960s did whatever was asked of them… pushing forward along the Lohit in the extreme east to build defences at Walong and Kibithu… along the Siang River to get to Mechuka, Tuting, and Gelling… and across the formidable heights of Se-la to defend the McMahon Line beyond Tawang at Bum-la and on the Nam Ka Chu.

Others in the middle and western sectors did much the same… Daulat Beg Oldi, the Qara Qash and Galwan Valley regions, the Chushul and demchok sectors… men and animals pushed themselves to the limits of human endurance to man the thin red line that on maps demarcated our border. In conditions that were almost barbaric, they scratched out sangars and bunkers amidst the rocks and river valleys, and in small little groups of sections, platoons and companies, they prepared to defend themselves and their country against an enemy who until a decade ago had nothing to do with the region.

However, on 20 October 1962, when the Chinese attacked – and let us never for one minute forget that they were the aggressors, all the propaganda about the Forward Policy having triggered the conflict notwithstanding – they literally went through our defences like a hot knife through butter… At Nam Ka Chu, 2 Rajput and certain elements of 1/9 GR fought and died there, but there can be no getting away from the fact that from our point of view it was a complete disaster.

Nam Ka Chu unfortunately was just the tip of the iceberg… At Bum-la, the fight was perfunctory for the Assam Rifles and 1 SIKH never had any back up, with Eastern Army Command throwing in the towel at Tawang. The same thing happened in Kibithu in the extreme east while in the west the fighting was isolated and extremely brief in northern Ladakh, culminating with the Chinese attacks at Srijap and Yula posts.

Then, despite a lull in the fighting, when nothing happened for the next three weeks, we again collapsed like a house of cards first at Se-la, then at Dirang and Bomdi-la. Walong had already imploded while in Ladakh, the two affected positions – Gurung Hill and Rezang-la were left to fight their own battles.

Why did this happen? How could things go so wrong? And then for years and years, we just refused to look at the reality of what had happened… History, they say is always written by the victor, but unless the vanquished are willing to look into a mirror, they are doomed to make the same mistake over and over again. Forget the reality, we were not even willing to look at the real problem, which was to a great extent, the civilian side of our defence set up.

This Indian army, which prides itself for never leaving a man behind, who for six days have dug in the ice at Bana Post with their bare hands to pull out their comrades, was not allowed to fight… nor was it allowed to bring back its dead and wounded. Not only did our boys die in the most horrible conditions, few were afforded the decency of a funeral, their bodies just being kicked into bunkers which then had a few stones put on them.

My book tries to not just document what happened but it also tries to understand why it happened… I looked at the history not only on the southern side of the watershed of the great Himalayas, but also on the northern side, especially the relationship between Tibet and China. Unlike other works in the past, perhaps not burdened by having worn a rank on my shoulders, I could look at the larger picture which involved the civilian decision making process and the political dramas that was unfolding in the background. What emerges is a horrifying story where it is not just the senior military leadership – completely compromised by the fact that most of them were political appointments – but also the other decision makers and politicians who failed to do their duty by their country…

If this book, half a century after the events, can even now make us pause long enough and look at ourselves in the mirror, it would have achieved its objective. At the end of the day it is not the Nehrus and the Menons and the Thapars and the Kauls and the Bogey Sens who are the losers – it is the country as a whole.

For years we have ridden on the shoulders of the soldier who asks us for very little, and who has time and again proved that he will dig even with his bare hands if there is even one Indian alive in the rubble… In my opinion, the only way for us to bury the ghosts of 1962 was to try and get as close to the truth as possible. Even now, I do not claim to have all the answers, but in my own way I have tried to present as comprehensive a picture as possible. So ladies and gentlemen, this book – 1962: The War That Wasn’t – has been written for the ashes of our fathers and the temples of our gods!

To quote from a comment posted by a literary critic on the social media who commented on the book:

“The only heroes are the dead, and the few who stood and fought. As a memorial to the fallen, and as posthumous justice there could be nothing greater, nothing more moving than this.”

I thank you all for being here in such numbers today. To me, this is testimony itself of the fact that today in India we have a discerning audience who is willing to look at what happened… History, they say, says that man never learns from history… well, ladies and gentlemen, let us as a people, prove that wrong!!!