The Congress party on Thursday served a legal notice to The New Indian Express for publishing what it called “wild allegations and sly insinuations” on the educational qualifications of party General Secretary Rahul Gandhi.

“Deeply distressed by your wild allegations, sly insinuations and self-serving innuendos, all premised on complete falsehoods and steeped in malice, a notice is being issued,” party spokesman Abhishek Singhvi told reporters at the AICC headquarters in the capital.

Singhvi quoted a letter from the University, which stated that Gandhi was a student at the institution as a member of the Trinity College from October 1994 to July 1995 and was awarded an M Phil in Development Studies in 1995.

Earlier, Rahul had also said in a press conference that he will serve a legal notice to the newspaper for writing the article.

Below is the article that the Chennai based newspaper published. Will keep you updated on any further developments on the issue.

(The article, dateline Chennai, was published in The New Indian Express on April 7, 2009. It has been reproduced here with proper permission)

Rahul Gandhi appears to have been economical with the truth on his affidavit while filing his election nomination papers in Amethi this weekend.

In the affidavit, he states that he obtained an MPhil from Trinity College of the University of Cambridge, UK, in 1995, in Developmental Economics. A certificate from the University shows that not only has he got dates wrong, he has even got the name of the course he took incorrect.

Worse, the man touted as a future prime minister failed one of his four papers.

Rahul got 58 percent in “National Economic Planning and Policy” (according to the grading scale given in the certificate, 60 percent is the minimum for a pass).

The certificate, shown alongside, was issued a year ago by Diana Kazemi, the secretary of the department of Development Studies (and not Developmental Economics) in which Rahul Gandhi studied.

He enrolled under the name ‘Raul Vinci’, a pseudonym given by the British authorities in a common practice as there are a good number of VVIP wards from around the world enrolled at British educational institutions. The pseudonym came to light during the 2004 elections in the Telegraph and the Hindu.

His affidavit’s other claim, to have obtained his Bachelors from Rollins College in Florida, USA, is true (and is a departure from earlier claims by ‘supporters’ that he graduated from Harvard). He also briefly attended St Stephen’s College in Delhi, gaining admission through the sports quota.

His mother (and Congress president) Sonia Gandhi was also in a minor controversy in 2004 over her educational qualifications.

Her nomination papers’ affidavit claimed she obtained a certificate in English from Lennox Cook School, University of Cambridge, in 1965. After it was revealed that the school had no affiliation to the University, Sonia claimed that the error on the affidavit was the result of a secretarial typing mistake. 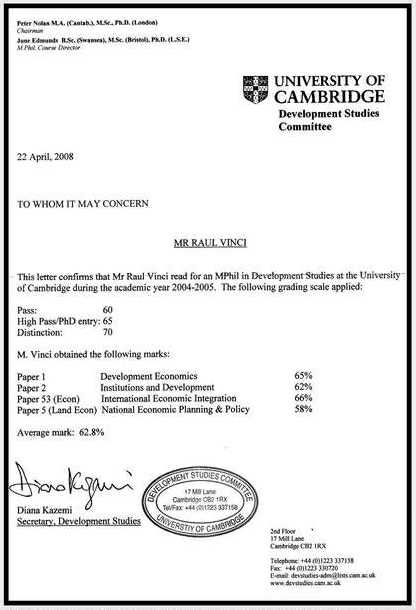