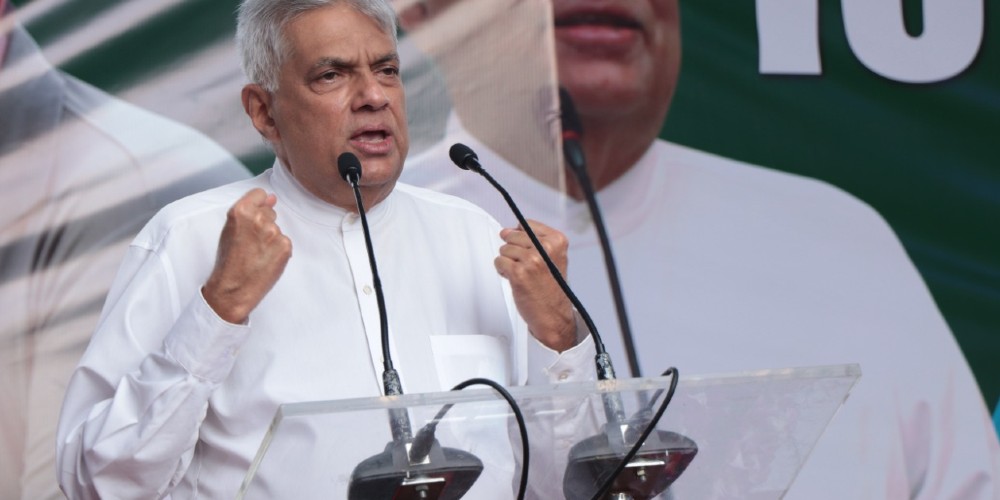 Whatever the aspiration of the protesters in Sri Lanka, the chaos they created has caused the messiah to appear in the form of the IMF. For the IMF to be effective, it needed a government it could vibe with. That there could not have been a better choice for the job of Prime Minister than Ranil Wickremesinghe became clear as daylight the moment he was sworn in.

“Ranil Wickremesinghe’s appointment and the quick formation of an inclusive government are first steps in addressing the crisis and promoting stability. We encourage meaningful progress at the IMF and long term solutions that meet the needs of all Sri Lanka.”

This instant approval of RW is by US Ambassador Julie Chung.

She knows RW as someone who has always been supportive of American presence in Sri Lanka in every shape and form. He clashed with President Sirisena who was not inclined to sign the Status of Forces agreement exactly as the Americans wanted. There can be no better candidate for such abject surrender than someone as politically weak as RW. His UNP was decimated in the last elections and he did not win a single seat.

“This is farcical democracy with the military on the roads and people under curfew,” wrote Activist Social Scientist, Darini Rajasingham Senanayake.

Rajasinghe is a little excessive, but RW’s appointment has been greeted with dismay across the board. For political oxygen he was seen prostrating before hawkish Sinhala clergy who would bless the US presence to eliminate Chinese presence from the island. China is on their wrong side because of Tibet. This wing of the clergy is also happy with India for having created the Union Territory of Ladakh by bifurcating Kashmir. There were celebrations in their Viharas when the Union territory was created.

This is all part of the comeback that the US is staging in South Asia after the excruciatingly painful debacle in Afghanistan in August. Even that may not have been such a humiliating retreat in retrospect. President Vladimir Putin’s adviser, Valery Fadeyev told me as much in the course of an hour long zoom interview last week. Who knows, he said, the US may have simply transferred power to the Taliban.

Sometimes political shifts alter geography as well. After 1947 Indian diplomacy, to a large extent, consisted in neutralizing Pakistan everywhere. With the creation of Bangladesh in 1971, the geography of South Asia changed. India become a large country surrounded by small ones. These countries, in concert, began to balance power by flourishing a Chinese card in their pocket. It was to neutralize this card that Atal Behari Vajpayee, as External Affairs Minister, made what he thought would be an epoch making visit to China in 1979. Den Xiaoping had other priorities: he had just launched his four modernizations in 1978. A somewhat charged up Deng decided to “teach Vietnam a lesson” in 1979, same year as Vajpayee’s visit.

The visit was something of a disaster. Later, several Prime Ministers, including Vajpayee visited Beijing. Bilateral relations were up and down but the border, viewed from two different perspectives, remained insoluble.

The collapse of the Soviet Union in 1990-91 provided the US with is Sole Super Power moment. Manmohan Singh’s economic reform 1991 onwards brought India in line with the US on many issues. It is forgotten that Narendra Modi’s arrival in Gujarat on 7 October, 2001 to take over from Keshu Bhai, coincided with the US fireworks in Afghanistan in pursuit of Osama bin Laden. It electrified Hindutva.

Islamophobia was the flavor of the season when the Godhra disaster leading to an anti Muslim pogrom of February 2002 happened. There was perfect harmony between the Bush-Blair Islamophobia and our communalism. Intelligence agencies kissed each other and became chums sharing or creating data on terrorists.

The US began to look in weak health after the collapse of Lehman Brothers in 2008. What magnified American decline was the corresponding rise of China. With diligence and with Chinese help, Vladimir Putin build Russia up into a power which it is today.

China-Russia declaration of “friendship without limits”, set the cat among the pigeon, in the Western camp. Just about this time came the humiliating images from Afghanistan.

The American century was a pipedream. The US was in retreat. Even steady camp followers like India began to cultivate other options. Yes, we were in the Quad but then what is this exclusive Anglo Saxon club called AUKUS? How reliable is the US?

India’s balanced votes in the UN on Ukraine are clear indications of diminishing faith in a policy of relying too much on one power.

The image of a tennis racket comes to mind to understand how New Delhi may have felt when the US left Afghanistan. Imagine the wiring of the racket as Afghanistan where once the American presence gave New Delhi comfort. Talib-Pakistan nexus was the Indian nightmare.

Post American departure, Iran, Turkmenistan, Uzbekistan, Tajikistan, China and Russia are all peering into Afghanistan. India is somewhere at the throat, joining the shaft to the rim or frame. The US has gone beyond two oceans. This altered Geography was disconcerting, a pressure on New Delhi to live in peace with neighbours, even the ones with border issues.

Pakistan is part of our internal politics, just as India is Pakistan’s. We need communal temperatures on tepid heat for the national mood to be boosted to a feverish pitch when required by, say, a Balakot. Remember Love Jihad, beef, hijab, stone pelting from mosques keeps the mood in a saffron hue. The national mood is galvanized only when communalism is tied to nationalism. In other word for big game hunting Kashmir and Pakistan are required as issues. Settlement of Kashmir or peace with Pakistan is not in our interest atleast until 2024.

So, we are relieved that the Americans are making a comeback in South Asia, first Pakistan, now Sri Lanka, next……… The people in these countries can stand in long queues till eternity because there is neither food in the shops nor petrol in the pumps.