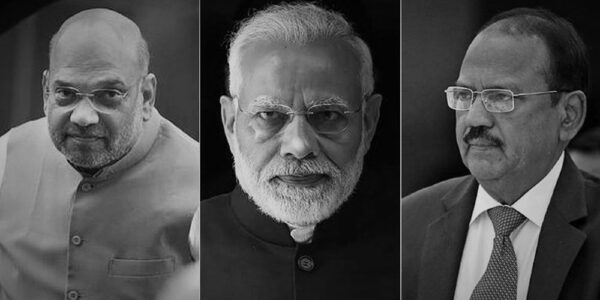 Unfortunately, in covering up for this big failure, and combined with the need to always appear on top of the other side, transparency went out of the window, opening the doors for what the Chinese have also perfected–the weaponization of dissent.

What political philosophy Subhash desired or would have pursued is a matter of conjecture. The moot question that the IB documents pose is as to why the family of Subhash was kept under surveillance for two decades after independence, and most deploringly, why was the surveillance report being shared with the British intelligence agency, the MI5.

The controversy surrounding Rajnath Singh and his son being called by Prime Minister Narendra Modi and confronted with evidence of “improper conduct” is refusing to die down. The details of the rumoured incident were already being discussed in the power circles even before the media started reporting about it.

Nearly 24 months ago the Government of India embarked on an ambitious development of an integrated cyber warfare platform to counter the enormous threats and real-time challenges mounted by the elite Chinese Cyber Command housed in the Peoples Liberation Army, General Staff Department -- Third & Fourth.

The Indian initiative to counter Chinese cyber warfare is being led by Centre for Artificial Intelligence and Robotics, Bangalore and CERT-In (Computer Emergency Response Team, India) located within the Department of Electronics & Information Technology in the Ministry of Communications & Information Technology, Delhi. Over 200 scientists from CERT-In, CAIR and several bright Indian techie consultants have been working to for two years to set up the Indian Cyber Warfare Command, called the 'NETRA'.

Former Research and Analysis Wing officer RSN Singh speaking at a seminar on "IB on the Brink: Politicizing Terror - A disaster in the making". The speaker, in this prophetic speech in July this year, had warned about the emergence of Bihar as a hub of Indian Mujahideen.

This systematic destruction of India’s internal security apparatus is not only for vote-bank politics as most commentators are suggesting. Of course the Modi-phobia is a factor but not the sole reason. It has a larger dimension which is evident from the nervousness displayed by the dispensation with regard to ISI, Hafiz Saeed and David Headley.

In December 2012, the Chief Minister of Bihar, Nitish Kumar, visited Pakistan. This author is at loss to fathom the reasons for Nitish Kumar to undertake a tour to a country with which Bihar shares no borders.

Did he go to Pakistan to learn lessons of ‘secularism’? Did he visit Pakistan to elicit Foreign Direct Investment (FDI) or was the purpose to get ‘special package’ (Vishesh Rajaya Darza) from the federal authorities based in Islamabad? The plausible reason could be ‘special package of vote-bank’. If going to Pakistan were to enhance vote-banks then the idea of Indian nation-state is over.

Your announcement that the source of the leak of Chief of Army Staff's (COAS hereinafter) letter would soon be made public, would have been normally welcomed. However, coming from you it sounds ominous.

Intelligence sharing is the most unsatisfactory aspect of Indo-US counter-terrorism co-operation. Before 26/11, the U.S. had hardly ever shared with India any worthwhile preventive intelligence.

David Coleman Headley had been planning an attack on India in collaboration with the ISI and the LeT for a long time. This was known to the U.S. authorities. Perhaps they could have forced Pakistan to restrain their spy agency.