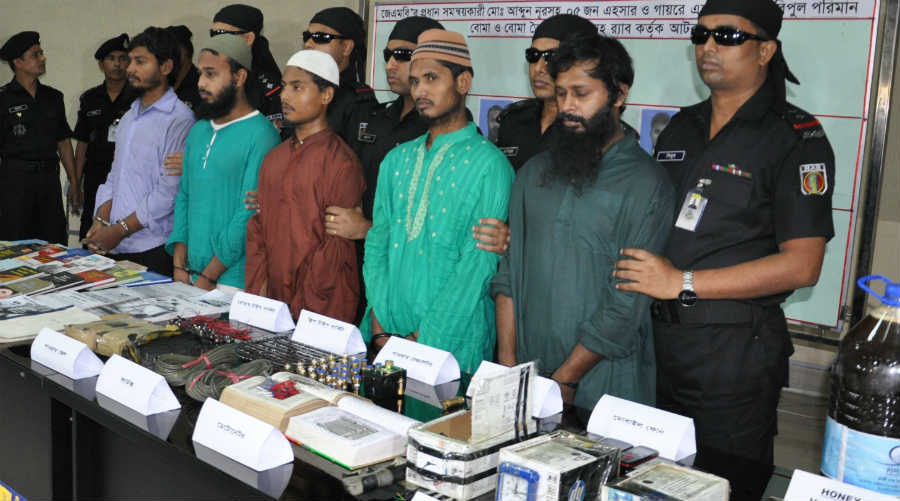 For a Pakistan obsessed country India, the accidental bomb blasts in Burdwan on 02 October served as ‘a wake-up call’. Even as Indians primarily confined their concerns on terrorism emanating from Pakistan, the West Bengal–Bangladesh region was evolving into another hub of jihadi terror. Given the fact that Bangladesh geographically impacts on five Indian states; West Bengal, Assam, Meghalaya, Tripura and Mizoram; the destabilizing potential of jihadi terror orchestrated from Bangladesh is even more vicious than the Af-Pak region. For reasons of political and social facilitation, West Bengal and Assam have been so far the preferred areas for Bangladeshi jihadi groups. The new political outfit in Assam, All India United Democratic Front (AIDUF), led by Maulana Badruddin Ajmal (MP) has come under the scanner of agencies and the media for their alleged role in recruitment and training of jihadis in Bangladesh. Bases flourished in these states particularly in the aftermath of the unprecedented crackdown on the fundamentalists and the jihadi groups by Sheikh Hasina regime in Bangladesh.

In March 2007, the leader of the Jagrata Muslim Janata Bangladesh (JMJB), Siddique ul-Islam (Bangla Bhai) along with five others were executed by hanging. The JMJB, which was banned in 2004, was allegedly linked to the Al-Qaeda. It may be mentioned that JMJB is an outgrowth of Jamaat-ul-Mujahideen Bangladesh (JMB), with considerable overlap of leadership between the two. There are analysts who are convinced that JMB or JMJB are proxies established by the Jamaat-e-Islami (JeI). The links between Khaleda Zia’s Bangladesh National Party (BNP) and JMB have been conclusively proven. The inaugural rally of the JMJB was addressed by a BNP leader, Besharat Ullah. Later links between Khaleda’s Deputy Minister for Land, Ruhul Kuddus Talukder Dulu and JMB also surfaced.

The sinister reach and influence of the JMB was exhibited in 2005, when the outfit detonated 500 bombs at 300 locations all over Bangladesh (63 out of the 64 districts) within 30 minutes.

The stronghold of the JMB was the Northwestern part of Bangladesh. The principal import of JMB/JMJB ideology is an Islamic State based on Sharia and neutralization of left-wing cadres of Purba Banglar Communist Party (PBCP), which it did with ruthless and unsparing violence. The rabid anti-communist credentials of JMB and associated organisations came in handy to the anti- government political forces in West Bengal. They argued that some extraordinary method was needed to break the CPMs stranglehold on state apparatus achieved purely by means of intimidation and ideological subversion over the years.

West Bengal exported and sustained Communism in parts of Bangladesh, and in return facilitated demographic assault and import of Islamic fundamentalism from that country.

Consequently these fundamentalists in league with politicians invited the jihadi organizations from Bangladesh to set-up bases in West Bengal at the behest of the politicians. The influx increased with the unremitting persistence of crackdown on these elements by Sheikh Hasina in Bangladesh. The legal assault on their mother organization, i.e. the JeI, by the Awami League regime virtually uprooted them.

The JeI leader, Abdul Quader Molla was hanged in December 2013. He, as a member of the Al-Badr militia during the liberation war, was convicted of killing 344 civilians and other crimes. Very recently another JeI leader and a cabinet minister under Khaleda Zia dispensation, Motiur Rahman Nizami, has also been sentenced to death for war crimes. He too was part of Al-Badr militia during the liberation war.

Earlier, Nizami was also sentenced to death with 13 others in January 2014 for smuggling of arms to India. In 2004, the Bangladesh Coast Guard apprehended 10 truckloads of arms and ammunitions in Chittagong, i.e. a total of 4,930 different types of sophisticated firearms; 27,020 grenades; 840 rocket launchers, 300 rockets, 2,000 grenade launching tubes; 6,392 magazines; and 11,40,520 rounds. It may be reiterated that Nizami was a Cabinet Minister then.

Taking on JeI, which has strong linkages with Islamic fundamentalist organizations the world over, significantly India and Pakistan, is an exceptionally audacious move by any leader of a Muslim majority country. The JeI in Bangladesh is considered a ‘state within state’ and an ‘economy within economy’. It has substantial share in Bangladesh’s banking, insurance, transport, NGOs, education, health care, media, information technology, and pharmaceutical industry sectors. Reportedly, it has a net annual profit of around $ 280 million. On 02 November, one JeI media tycoon Mir Quasem Ali was sentenced to death by the special tribunal for 1971 war crimes. Mir Quasem is a member of the highest policy making body of the JeI.

Concomitantly, the crackdown on fundamentalists and jihadi organizations in Bangladesh engendered corresponding increase in levels of violence in West Bengal. A political party in West Bengal used the displaced jihadis from Bangladesh to deadly advantage. The sophistication and quantity of armory of the armed groups opposing land acquisition in Nandigram in 2007 was bewildering. Organizations like Bhumi Uchhed Pratirodh Committee (BUPC) and Bhumi Raksha Committee took on the might of the State. Even the Central Armed Police Forces proved unequal to the challenge. The security apparatus of the State surrendered its dominance, which has since remained so even under the changed dispensation. If one were to deduce from the posturing of the SP of Burdwan, SMH Meerza, in the aftermath of the blasts, the allegation of state complicity may not be unwarranted.

The Soviet Union was humbled by the jihadis in Afghanistan. The narrative ‘Islam Vs Communism’, a very potent and successful at that, was scripted by the US. The same narrative operated in West Bengal. The tool this time was organizations like JMB. The Communists in West Bengal and globally as such, unwittingly facilitated this narrative in overestimating the appeal of their ideology vis-à-vis Islam. It is they who willfully re-engineered the State’s demography by illegal immigrants from Bangladesh for vote banks. In the late 70s, one chief minister when queried about the phenomenon of illegal migration said that he did not distinguish between the proletariat of India and Bangladesh. With illegal migration Islamic fundamentalism made strong in-roads in West Bengal. Communist ideology and Islamic fundamentalism developed a symbiotic partnership and borders became incidental. The same fundamentalist elements, who served as Communist vote-banks, turned their back and began to support a party, which they perceived as even more indulgent to fundamentalism. Their new found leader went to the extent of public display of ‘namaz‘, solely for consumption of media.

Bangladesh is critical for ISI for destabilizing operations against India, particularly east and the north-east. In this the Bangladesh Nationalist Party (BNP) has acted as steadfast facilitator. No sooner, Sheikh Hasina came to power in January 2009, there was a desperate bid to dislodge her by the ISI backed Bangladesh National Party (BNP). It took the form of engineering a revolt in the Bangladesh Rifles (BDR), the para-military organization. 57 BDR Officers drawn from the Bangladesh Army were killed, it included the BDR Chief, Maj Gen Shakil Ahmed, Deputy Chief and 16 Sector Commanders. The main target was Sheikh Hasina. There are reports to suggest that this was a desperate bid by the ISI and its jihadi affiliates. The truck between Khaleda Zia and the ISI is well established.

Sensing certain electoral defeat Khaleda Zia boycotted the elections in 2014 on specious pleas. The nexus between the ISI, Khaleda Zia’s BNP and the jihadi organizations have only strengthened, rather become more vicious. This combine is again trying to dislodge her by any means. The difference this time is that West Bengal is serving as a base for the war against Sheikh Hasina dispensation.

The dispensation in West Bengal appears to be so indebted or beholden to these Bangladesh based jihadi outfits and their benefactors and affiliates that on their calling it sabotages every conciliatory, beneficial reach out bid by Sheikh Hasina towards India. It is for this reason that it opposes the Teesta Water Treaty or the proposed exchange of enclaves between the two countries.

It is not only the ISI-BNP-Jihadi combine that wants to see the political end of Sheikh Hasina, there are extra regional powers who want the same for strategic reasons. As elsewhere on the globe, these powers are not averse in using the same jihadi organization that they decry otherwise. In the past they have done it with Al Qaeda and they have done it with Taliban. Al Qaeda has not been dismantled after the elimination of Osama bin Laden. Instead, the new chief al-Zawahiri has established Jamaat Qaidat al-jihad fi’shibhi al-qarrat al-Hindiya or Organisation of The Base of Jihad in the Indian Sub-Continent under Asim Umar, who is an Indian. This new outfit has strong Bangladesh and West Bengal underpinnings. The leader of the Afghan-Taliban, Mullah Omar is still at large due to deliberate oversight of the US and its allies.

Just as Taliban was financed in the early 90s by American Oil Company Unocal to convert them into pipeline police, certain jihadi outfits are possibly being courted to dislodge Sheikh Hasina so that the dispensation in waiting could provide the much needed foothold and access in the Bay of Bengal. Bangladesh and China have been engaged in serious negotiations for construction of deep water port at Sonadia near Cox’s Bazar. Reportedly, China has offered $5 billion for construction of this port. Reports suggest that the proposal was very much on the agenda of Sheikh Hasina during her recent visit to China in June 2014, but finally refrained from signing an MoU in deference to the security sensitivities of India and under enormous pressure by the US. The US has been vying for a presence in the Bay of Bengal (Chittagong), wherein China is active by its presence in Kyaukpyu port on Myanmar’s western coast. There are apprehensions in India that Sonadia may turn out to be another Gwadar for China. Bay of Bengal has overbearing security imperative of India not only in respect of its eastern coast, but also for the criticality of retaining sea based second strike nuclear capability.

The overall manifestation of the geopolitical flux in the Bangladesh – West Bengal region is its descent into hub of jihadi terrorism. Earlier, India blamed Bangladesh for harbouring Indian terrorists and insurgents, now the reverse is happening, not because of the omissions and commissions of the Union Government but arguably because of the commissions of the state government.

In West Bengal, some of the madrasas (500 recognised and 4,000 unrecognised) are engaged in indoctrination, recruitment and training of jihadis. As per the NIA, there are 58 terror modules operating in the state. The objective of the jihadi outfits present in West Bengal is not only to dislodge Sheikh Hasina government, but also serve as a conduit for manpower resources to Al Qaeda and ISIS. It is not mere coincidence that some Indian youth, especially from Andhra Pradesh and Maharashtra, willing to join the two organizations headed for West Bengal for their onward jihadi journey.

The most worrisome part is the criminalization of women and children in West Bengal by the jihadi organisations. The NIA has identified more than a dozen woman cadres in two madrasas of Burdwan and Murshidabad districts, who are being trained in arms and jihadi activities. The Chief Minister of West Bengal should worry that JMB aims at establishing an Islamic Caliphate comprising Bangladesh, Murshidabad, Malda and Nadia districts of West Bengal. If politics blinds her, neither she nor the state will be spared from being consumed by jihadi fire.

2 thoughts on “The Islamic Caliphate of Bangladesh and West Bengal”