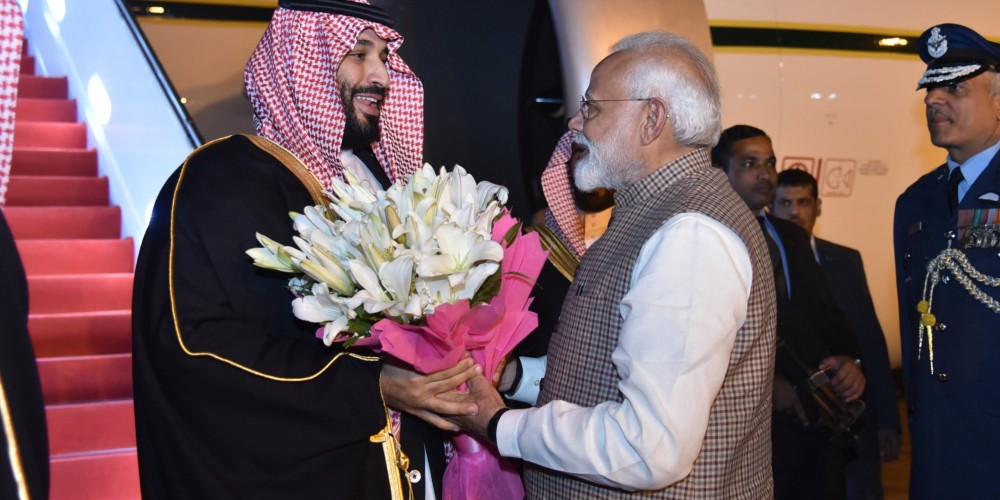 Notwithstanding the cliché phraseology – “deep commitment to strengthen the strategic partnership envisaged in the Riyadh Declaration of February 2010” – the joint statement issued at the end of MBS’s state visit failed to nail down Pakistan’s role as a State Sponsor of terrorism.

Towards the end of last year MBS constituted a hit-squad of 17 trusted officials to murder dissident Saudi journalist and resident of Virginia, USA, Jamal Khashoggi. He was dismembered alive, his body parts chopped piece by piece, inside the Saudi consulate in Istanbul. In November 2018 the US Government officially acknowledged that its Central Intelligence Agency was in possession of incontrovertible evidence that MBS had ordered the murder of Washington Post columnist, Khashoggi, which amounts to an act of State sponsored terrorism.

In fact, the CIA has electronic intelligence to prove that a key aide of MBS, Saud-al-Qahtani, was in constant touch with the Saudi ruler even as the brutal killing of Khashoggi was on. Turkey’s National Intelligence Organisation also made public that it has recorded communication between Maher Abdulaziz Mutreb, head of the Saudi assassination squad, and Qahtani. “Tell your boss”, Mutreb informs Qahtani over a phone call after Khashoggi is murdered.

The sanctions were imposed through an executive order under the Global Magnitsky Human Rights Accountability Act. “The Saudi officials we are sanctioning were involved in the abhorrent killing of Jamal Khashoggi,” Treasury Secretary Steve Mnuchin said in a statement.

“These individuals who targeted and brutally killed a journalist who resided and worked in the United States must face consequences for their actions. The United States continues to diligently work to ascertain all of the facts and will hold accountable each of those we find responsible in order to achieve justice for Khashoggi’s fiancée, children, and the family he leaves behind. The government of Saudi Arabia must take appropriate steps to end any targeting of political dissidents or journalists.”

The WikiLeaks’ release in 2009 of a Hillary Clinton memo (she was then the US Secretary of State) revealed that extent of Saudi funding of terrorist organisations across the world, particularly those operating from safe havens in Pakistan. With Saudi funding it would impossible for Pakistan’s military establishment and its Inter-Services Intelligence to support and direct cross border terrorism against India.

Clinton in her cable to State Department Staff wrote: “Donors in Saudi Arabia constitute the most significant source of funding to Sunni terrorist groups worldwide” and that “More needs to be done since Saudi Arabia remains a critical financial support base for al-Qaeda, the Taliban, LeT and other terrorist groups.” According to Wikileaks an August 2009 State Department cable also said that the Pakistan-based Lashkar-e-Taiba, which carried out the 2008 Mumbai attacks, used a Saudi-based front company to fund its activities in 2005.

In the eyes of the international community Saudi Arabia has systematically embarked on creating a new brand image of a country which wishes to lead to the global fight against the scourge of terrorism. the India – Saudi Arabia joint statement calls “on all countries to renounce the use of terrorism as an instrument of state policy” and urged the international community to push for “early adoption of the UN Comprehensive Convention on International Terrorism.”

The wording of the joint statement has in effect elevated Saudi Arabia as a crusader against terrorism, when the reality is that it continues to be the biggest funder of terror organisations by bank rolling countries like Pakistan that maintain and operate terror related infrastructure. Despite overwhelming evidence of Pakistan’s state policy of setting up, recruitment, arming, training and launching cross-border terrorism, the fact is that MBS announced $20 billion investment in Pakistan. It’s important to remember that in 2018 the Saudis, stepped in with $10 billion aid package.

Historically, Saudi Arabia and Pakistan have had a close military relationship. In 1979 Pakistanis commandos successfully broke the siege of the Grand Mosque and helped the Saud family regain control over the Masjid-al-Haram. In 2013 a BBC report claimed that Saudis had invested in Pakistan’s nuclear weapons project and the latter’s nuclear weapons status is a proxy for Saudis’ access to nuclear weapons. Both the countries denied the report. However, it is a fact that Pakistani armed forces have a significant presence in Saudi Arabia on different pretexts, from “training and advise mission” to special security related tasks.

Given this background it is a strategic imperative for Saudi Arabia to project a duplicitous image to the international community. It does so by deploying large sums of monetary resources to portray its fake commitment to combating terrorism.

Saudi Arabia is currently the Chair of the Advisory Board, United Nations Counter-Terrorism and hosted the 16th meeting of the UNCCT Advisory Board in April 2018 in Riyadh. The Advisory Board is comprised of 21 Members States representing all the regions of the world and the European Union as a Guest Member. The Saudis have been using UNCCT to craft a new narrative of a country leading global efforts to counter terrorism. The Foreign Minister of Saudi Arabia, Adel bin Ahmed Al-Jubeir, talked about the “unwavering commitment of the Kingdom of Saudi Arabia in supporting these efforts” to counter terrorism.

The “unwavering commitment” simply means Riyadh brought global quiescence by funding the setting up of UNCCT with USD 110 million. Saudi Arabia is the largest contributor to the UN Trust Fund for Counter-Terrorism, which resources the Centre. The UNCCT was established to provide capacity-building support to Member States for the implementation of the UN Global Counter-Terrorism Strategy.

The UN Global Counter-Terrorism Strategy was adopted through consensus by the General Assembly in 2016 and is reviewed every two years. India and Pakistan are members of the Advisory Board, UNCCT. So is the United States.

But the charade continues – India and the United States continue to turn a blind eye to Saudi Arabia’s funding of terrorism on one hand and on the other promoting itself on the global stage by funding counter terrorism initiatives.

In December 2018 the US Secretary of State, Mike Pompeo testifying before the Senate Foreign Relations Committee candidly outlined US’s dilemma. He said US had a stark choice – either retain MBS/Saudi Arabia as an ally despite evidence that the country is State Sponsor of terrorism or sacrifice years of diplomatic manoeuvrings after 9/11 which had helped US counter terrorism in its homeland and also use Saudi Arabia to checkmate Iran.

Opportunity for Modi to call the Saudi bluff:

On February 14, the day 40 Indian para-military soldiers of the Central Reserve Police Force were killed in car bomb suicide attack in Pulwama, Jammu & Kashmir, the European Commission confirmed its intention to include Saudi Arabia list of countries financing terrorism. “Europe cannot be a laundromat for dirty money which sponsors crime and terrorism,” said Vera Jourova, European Commissioner for Justice. The European Commission believes there is enough evidence at hand to believe Saudi Arabian individuals or financial institutions are being used in money laundering or financing terrorism.

Now, with the world’s biggest financier of terrorism ending his first state visit to Inida successfully, Mr. Modi has played into the Saudi – Pak agenda of blunting the Indian government’s agenda of ensuring Pakistan pays a heavy price for Pulwama and decades of unabated cross-border terrorism. The Indian prime minister failed to persuade MBS to support India’s efforts to declare Masood Azhar a ‘global terrorist’. More importantly, the parts of the joint statement that address the issue of terrorism is pure diplomatic hogwash because the Indian government did not appear to draw a line for Saudi Arabia to stop financing Pakistan’s support for terror groups operating in Jammu and Kashmir.

Prime Minister Narendra Modi’s political aura of demonstrating courageous leadership in fighting terrorism has been substantially dimmed. The Saudis walked away with its support for Pakistan and made India look like a supplicant, eager to please a country that is known to finance terrorism.