All was well between Devyani and her domestic help Sangeeta Richards. Once settled in New York with her employee and family, she in a letter wrote in very eulogizing terms about Devyani, her husband and their children. She says that the diplomat is very jovial, and her husband a very fine person, who partakes in her work, as a result she has considerable free time. Sangeeta also says that she is treated like a family member and the children allude her ‘tai’ (aunt). Some people living in the same Indian Mission building have confirmed to this author that Sangeeta looked like a family member than a domestic help and appeared to be extremely comfortable and congenial till she disappeared.

A copy of the letter is displayed below: 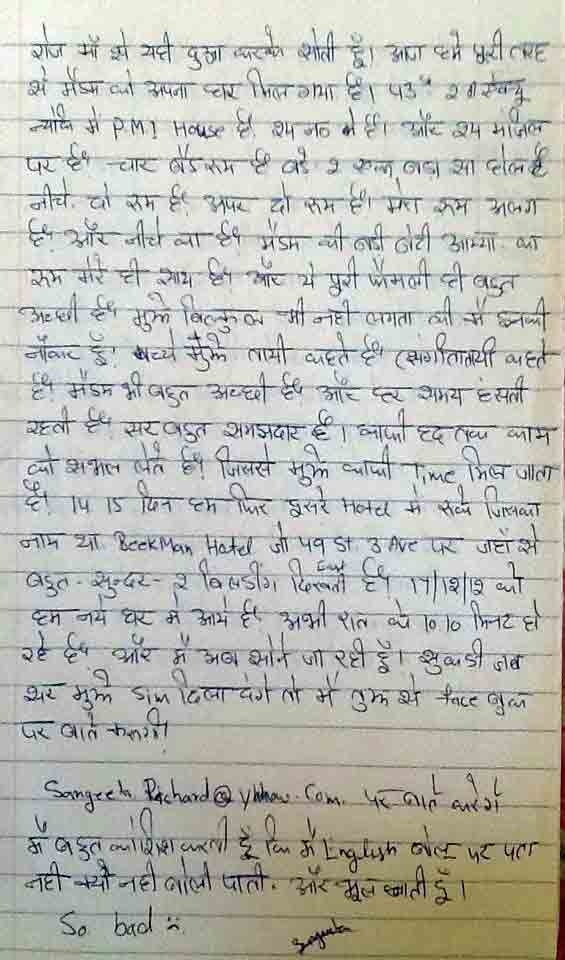 The sudden disappearance of Sangeeta and enigmatic bonhomie with an Attorney, Preet Bharara is befuddling. He is known for his ruthlessness in pursuit of his political ambitions by endearing himself to the US authorities by using depraved means. His method essentially involves laying judicial trap for fellow Indians, which begins with judicial blackmail or extortion. The desperation and viciousness in his judicial hunt for Devyani smacked of an US government agenda. Even, as an afterthought, if one were to disregard the fact that she was in the business of siphoning secret documents, the very sequence of events makes the espionage angle compelling. The actions that the Attorney took and statements he made, was beyond the realm of profession of law. When Sangeeta’s husband and family were hijacked from India the Attorney termed it as ‘evacuation’. Does an Attorney use such language bordering on ‘war-mongering’. Does Preet Bharara want to wage a war against his motherland? Should India evacuate David Headley?

Now it appears that the entire case was fabricated by Bharara. Devyani’s lawyer Daniel Arshack said that it was the US authorities, who could not read the Visa Form (DS-160) in respect of Sangeeta Richard correctly. They deliberately or inadvertently read $4500 a month salary on the form as Sangeeta’s expected salary, when ‘in fact it was reporting the base salary of the diplomat’ as required. The ‘employment contract’ submitted along with the Form DS-160 clearly mentions that $1560 would be paid to Sangeeta. The figure is based as per the wage laws of New York, i.e. $9.75 an hour, 40 hour a week. One can otherwise forgive the Americans for this oversight as substantial numbers of them are uneducated, but this is a deliberate fraud committed for criminal reasons.

It is obvious that the Attorney is in truck with the US State Department or the American dispensation as such. He allowed himself to become a willing tool of the US government in perpetrating physical and mental crime on a woman diplomat. Sans the espionage angle, the matter would have been purely political and diplomatic in import.

From June to September 2013, the matter just simmered beneath a diplomatic lid, as is normally the practice in espionage cases. No diplomatic mission publically admits of being victims of espionage. In September 2013, the Indian Embassy wrote to the State Department that Sangeeta, who was an absconder, should be arrested and restored to the Indian Embassy as she had violated both the Indian and the American laws, and had stolen cash, cell-phone and ‘documents’. The documents that Sangeeta stole are believed to be very vital to India’s national interest. Also, it needs to be highlighted that the entire Indian officialdom based in New York, including country’s representative at the UN are housed in the same building. For Sangeeta, the building was a mine of information.

While the US authorities were engaged in protecting their ‘asset’ by fabricating various legal spins, matters exacerbated due to another development in India. On October 12, 2013 an American vessel MV Seaman Guard Ohio, belonging to the US firm AdvanFort, was apprehended by the Indian Coast Guard for unauthorized presence in India’s territorial waters. The vessel was being replenished with 1600 liters of high speed diesel by an Indian fishing trawler. The vessel with 35 members (10 crew and 25 security guards) in contravention of law, carried 35 assault rifles and 5680 rounds of ammunition. The crew and the guards were of various nationalities, i.e. Estonians, British, Ukrainian and Indian. All the 35 members were arrested for illegally carrying arms in India’s water and lodged at Palayamkottai Central Jail in Tamil Nadu. Even though there was no US citizen on the vessel, three officials from the US Consulate General at Chennai visited them the very next day. The US authorities maintained that the vessel was engaged in anti-piracy operations for protection of American merchant vessels, and were well beyond the Indian maritime territorial limit of 12 nm.

The crew members and the guards of the vessel, the US authorities emphasized, were specialists in anti-piracy operations and had honourable antecedents, having served in the armed forces and security establishments of their respective countries. The Indian authorities have been steadfast on their stand that they would be tried as per the ‘law of the land’. The bitterness between the US and India over the issue only ratcheted in the subsequent days and reached the ‘snapping point’ in the first week of December 2013. Addressing a press conference on the Navy Day 3rd December the Indian Naval Chief Admiral DK Joshi warned: “Unregulated floating armouries carrying combatants of certain countries are a matter of concern and can have serious security implications for the including infiltration of terrorists that can lead to 26/11 type attacks.”

The Admiral also made an impassioned plea for ‘reversal’ of high risk areas for merchant ships plying in the piracy prone zones. Two years back the longitude marking off high risk areas for piracy was moved from 65 degrees to 78 degrees in the Arabian Sea by the International Maritime Organisation (IMO) and the Contact Group on Piracy off the Coast of Somalia (CGPCS) constituted in 2009 following a UN resolution. The new longitude, although away from India’s territorial waters limit of 12 nautical miles, is dangerously close to the Indian coast. Ships in order to be safe from piracy tend to hug the Indian coast from Mangalore to Kanyakumari. The Enrica Lexie incident (February 2012) in which two Indian fisherman aboard a fishing trawler were killed by Italian marines some 22 miles off the coast was primarily because of the eastward advancement of the high risk longitude.

The change in the longitude has made fishing activities by Indian fishermen extremely contentious and dangerous because of intense international shipping activity close to the Indian coast. Indian maritime authorities like the Coast Guard have been complaining that the shift in the longitude was unwarranted and based on exaggerated threat. From the perspective of overall maritime security of India, with the shift in ‘high risk area’ by the West dominated IMO, the threat is pernicious, causing endemic hostile incidents, including two major ones as mentioned. The lament of the Indian Naval Chief is therefore more than apposite. No country with self-respect will tolerate such an international arrangement which impinges on its everyday legitimate maritime activity and is pregnant with misuse by terrorists and maritime hostilities.

It is under these circumstances that the US vessel MV Sea Guard Ohio was apprehended by the Indian Coast Guard. Notwithstanding the US pressure, Indian authorities would be amiss if they did not treat and investigate the vessel and its crew and guards as floating armouries.

It is this very application of the ‘law of the land’ that disconcerted the Italians and now the Americans. It was also the reason for incarceration of Captain James in Togo, an erstwhile French colony.

Having exhausted the leverages at the highest levels, solely attributable to public pressure, the US in a cynical ‘law of the land’ riposte on India converted a simmering espionage issue into a diplomatic bargaining chip. But not before spiriting away Sangeeta Richard’s husband and family to America. It is now established that the US embassy in India facilitated their travel monetarily and otherwise. The US Embassy officials, who effected the escape of Sangeeta’s family committed ‘Contempt of Court’, as the Richard family was facing a court case when they left India.

Apart from espionage, which is an ongoing activity, the Devyani issue has larger strategic and maritime reasons and facets.

Sangeeta’s espionage network is just one of them. American leverages comprises NRIs, influential intellectuals and media establishments, who were issued diktat to divert public attention and vilify the diplomat by associating her name with Adarsh scam and by frantically excavating things having no bearing with the case. This author was on a TV channel and was told that it had been issued an advisory that the agenda for the day was demonizing Devyani and consequently eulogizing the US. India’s strategic engagement with the US is unequal, because some greedy and subverted Indians have lent their weight to the latter. It is for this reason that that the US authorities treated both Devyani and Sangeeta as slaves, one as a bargaining commodity and the other as a captive spy.

(RSN Singh is a former military intelligence officer who later served in the Research & Analysis Wing. The author of two books: Asian Strategic and Military Perspective and Military Factor in Pakistan, he is also a Guest Blogger with Canary Trap)

5 thoughts on “Devyani Case: Unequal strategic partnership with the US”