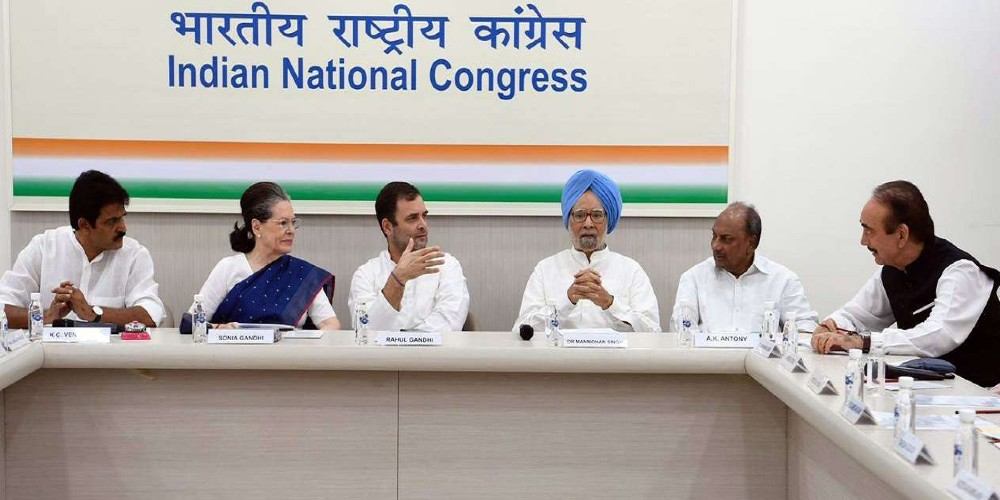 The utter irrelevance of the Sachin Pilot-Ashok Gehlot spat is matched only by the saturation coverage accorded to the mishap by the media – atleast a large section of it.

Of Rajasthan’s storm in a teacup the amplification is more disturbing than the storm itself. It reinforces the perception which is most helpful to Narendra Modi: “Look, that is the disheveled lot being positioned to replace me.” Modi’s own men will not be able to devise a script more favourable to him, and it is so simple: just keep the Gandhi family in focus as the only alternative.

After the fall of the Soviet Union, neo-liberal strategist, Francis Fukuyama predicted the End of History. The neo-liberal utopia had arrived. He was wrong, indeed he was shamed. Observers of the Indian scene are liable to be proven equally wrong if they predict that the Congress party is about to go over the cliff. As in the mobike ad, the party may just splutter over the chasm. Much more helpful will be the analyst who can peer into his binocular and report, like Sanjay of Mahabharata, the departure of the Gandhi family.

This would be a welcome outcome not because some Lutyens’ bungalows in their occupation will become available for other politicians. Quibbling over security for Priyanka is partly misplaced. Sonia Gandhi was paranoid about the family’s security (quite understandably) when a reluctant Rajiv ascended the gaddi soon after Indira Gandhi’s assassination. Once he had worn the crown, the security of the two Gandhi siblings was such a matter of concern that “uncle” T.N. Kaul, ambassador to the Soviet Union had more or less arranged for Rahul, then 15 and Priyanka, 13, to be parked in Moscow, which seemed like a wonderful idea because Mikhail Gorbachev had so warmed up to the young Indian Prime Minister.

Had Rajiv lived through the 1991 elections, he would have sat in the opposition. His assassination in Sriperumbudur in Tamil Nadu, half way through the campaign, changed Congress fortunes. It derailed the Gandhi family though.

Rajiv was losing seats in the North in the first phase of the 1991 campaign. The sympathy factor after the death operated in the South to boost the Congress barely upto the pipping post. The South heavy Parliamentary party became the anchor for the Party’s first Prime Minister from the South, P.V. Narasimha Rao. The wily Brahmin that P.V. was, his politics became clear from the very outset: no challenger would be allowed to prosper in the North particularly if he happened to be non-Brahmin, indeed a Thakur like Arjun Singh. It is interesting that the strongman of Madhya Pradesh, secular in the Nehruvian mould, whom Rajiv had once elevated as Executive Vice President of the party, was outside the pale for P.V. As late as June 4, 1992, two days before the Babari Masjid demolition, Singh was warning friends that the mosque could fall. After the fall, mass defection of the Muslim vote brought P.V.’s Congress to its lowest ever – 140 seats.

This was the state of play when Sonia concentrated on her children, family friends like Satish Sharma (Rajiv and him were Indian Airlines pilots) and sundry school friends. In 1997, Priyanka, 25, married an upwardly mobile Robert Vadra who had leapfrogged from the family’s brass business in Moradabad to the British School in New Delhi. He was married into the premier family, alright, but his mobility upwards would be boosted if Sonia Gandhi emerged from her political retirement. Within months of the Priyanka-Vadra marriage, ambition stirred. P.V.’s dethronement in May 1996 after his dismal performance and a general restiveness in the Congress Working Committee, that a low level, “teli” (seller of oil in rural India), Sitaram Kesari, then President of Congress, was angling to become Prime Minister, provided a suitable occasion. What was speculation was dignified as fact by the senior most Congressman, former President Pranab Mukherjee in his book “The Coalition Years”.

Nothing became her less than the illegal manner of Kesari’s ouster. He was locked up in his Congress office; just in case he protested. Pranab Mukherjee, among others, supervised the wrenching out of the Kesari name plate: it was replaced by “Sonia Gandhi” Congress President, written in black ink as a temporary measure.

Quite unlike Kesari’s ouster, nothing ever became Sonia more than her refusal of the crown after the party’s shock victory in 2004. That the 2004 to 2009 term was the high point of Sonia-Manmohan Singh team is not celebrated with high decibel drum beating because a great deal of restraint and dignity was imparted to the power apparatus by the 61 Communist MPs who supported it from the outside. By setting up a National Advisory Council as a restraint on neo liberal excesses Sonia too asserted herself.

There is a huge lie Indian ruling classes have told themselves: like our masters in London and Washington, we have become a two party system. A multi-ethnic, multi-religious, multi-lingual country where currency notes indicate every denomination in seventeen languages, most with classical literatures pre-dating Christ – will this immense diversity ever be contained within two parties?

By not moving out of the way, the Nehru-Gandhi family is holding up political movement, a churning, shuffling by which the regional parties will have a stake in an accommodative central unit which is not obsessed with the unrealistic desire to revive “on its own” just because the straight laced Randeep Surjewala announces, without an iota of embarrassment, that his leader, Rahul Gandhi, is a “janeudhari Brahmin”. By its mulish obstinacy, the Gandhi family is ensuring the perpetuation of one-party rule on the other side.