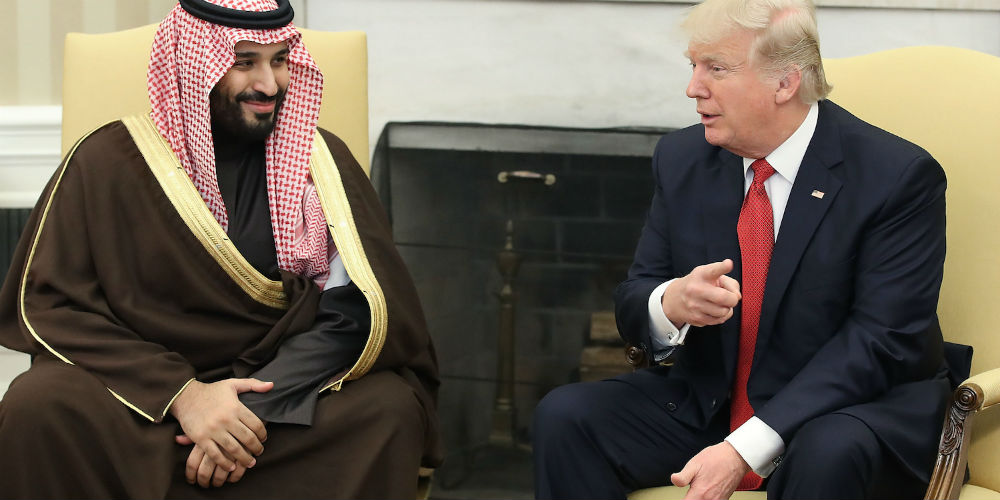 The Crown Prince of Saudi Arabia, Mohammad bin Salman, 32, has once again given international affairs a twist which has caused a hush to descend on the world centres of power.

He announced that Bashar al Assad would not be toppled. “Bashar is staying”, he said, then continued, “but we believe Bashar’s interests are not to let Iran do whatever they want to do.” He also added, in parenthesis, that “American troops should stay for atleast the short term if not the long term.”

This last bit of advice to the Americans was obviously an immediate response to what Donald Trump had announced in Ohio. He said US troops would be pulled out of “that war weary country” very soon.

Did this statement invite a panicked response from MBS in the course of his interview to Time magazine set up in New York’s Plaza hotel? Or, was it all choreographed with the Americans, in response to some “other” development.

The US President announces troop withdrawals from Syria just when the Saudi Crown Prince is visiting him. MBS goes one better. He makes the entire Saudi policy since the beginning of the Syrian war stand on its head. President Assad can now keep power in Damascus. Until a few days ago “Assad had to go”. This was non negotiable.

The chorus has been joined by the UN Secretary General Antonio Guterres. Addressing the UN Human Rights Council, he thumped the table and screamed with emotion. What is happening in Ghouta, south of Damascus is “Hell on Earth” and that “it must be stopped”.

So divided is opinion on the Syrian conflict, that fingers were instantly pointed at him. Does the description “Hell on Earth” apply only to Ghouta and not what the world saw in Aleppo, Idlib, Mosul, Fallujah, Yemen? After all, hundreds of thousands of migrants walked, sailed, drove to Europe to escape the unspeakable horrors of Syria, Libya, even Iraq. No one saw the Secretary General do the “Tandav” then. He was not heard screaming. “Hell on Earth.” There must be something special about eastern Ghouta. What is it?

Sifting details, a narrative does emerge in sharper profile. A major provocation by the “opposition” (for which read US led alliance) in Idlib near Aleppo, cause Syrian troops, their Russian backers in tow, to rush in that direction. Syrian Intelligence, meanwhile, picks up chatter which suggests that Idlib may have been a diversionary ploy. In “opposition” focus was the biggest game of all: attack on Damascus. If true, it was an audacious plan.

Tanfs, on the Syrian side of the border with Iraq (Al Waleed is on the other side) serves as a US base. To grasp the plan a map of Syria, bordering Iraq, Jordan and Israel would help. About 30,000 trained militants, in small batches, were to move along the border with Jordan, looping around Daraa towards Quneitra, the Golan Heights, looking for passages into Ghouta. This is where the White Helmets were to play a key role.

Media audiences may be forgiven for imaging that White Helmets are variants of Medicines without Borders, the Red Cross and so on. This precisely is the way they have been projected on global media. Let me give you an example:

On October 12, 2016, Christiane Amanpour of the CNN, places in Russian Foreign Minister, Sergey Lavrov’s hand a photograph of a four year old Syrian boy with a burnt face. This is in the course of an interview with Lavrov, who looks at the photograph and mutters “very sad”. In the same interview he says openly that the US was helping the Nusra Front.

On October 20, the same photograph is flourished by Hillary Clinton during the final Presidential debate with Trump in Las Vegas. Clinton even simulates a lump in her throat while dwelling on Russian perfidy in Syria. Remember, throughout that election campaign, Trump was painted in dark colours as a beneficiary of Russian favours.

Now, let’s turn to Vanessa Beeley, of the 21st Century Wire website. She paints the White Helmets in lurid colours. According to her and a host of alternative media, White Helmets are part of the West-led anti-Syrian war effort.

It was this alternative media which posted visuals of the very same “burnt boy” being strapped to a chair in a mobile studio even as cameramen produce pictures which find their way to Amanpour and Clinton during shows with record viewership. It is a frightening reality.

Now let’s revert to the plan to take Damascus. As thousands of trained “rebels” close in on the Syrian capital, the White Helmets, who, according to Beeley, are also false flag specialists, will detonate poison gas or something worse which the global media (also part of the operation) amplifies as the greatest detonation since Bikini Island. The day would only be saved by a massive US led air campaign. My source for this drama is only the alternative media which, alas, is the most credible outlet available since the mainstream media appears to have been mobilized for the “war effort”. This I know from my visits to Syria.

As often happens, the Damascus plan leaked. Syrians had spared Ghouta thus far for a simple reason: the human shield factor made it a forbidding operation. But after the leakage of the mega plan, Syrians and the Russians had no option but to go for broke on Ghouta. The white Helmets also went full throttle with their propaganda amplifiers. The world saw the horrors of Ghouta (albeit manufactured) on their TV sets.

In the meanwhile, the Syrian army captured Western, Israeli, Saudi intelligence assets working out of a full-fledged control room in Ghouta. This, as I indicated in an earlier paragraph, is what is special about Ghouta.

Does this explain the suddenness of revelation with which the script on Syria has been altered? And, can peace which results from a gigantic blackmail, last?