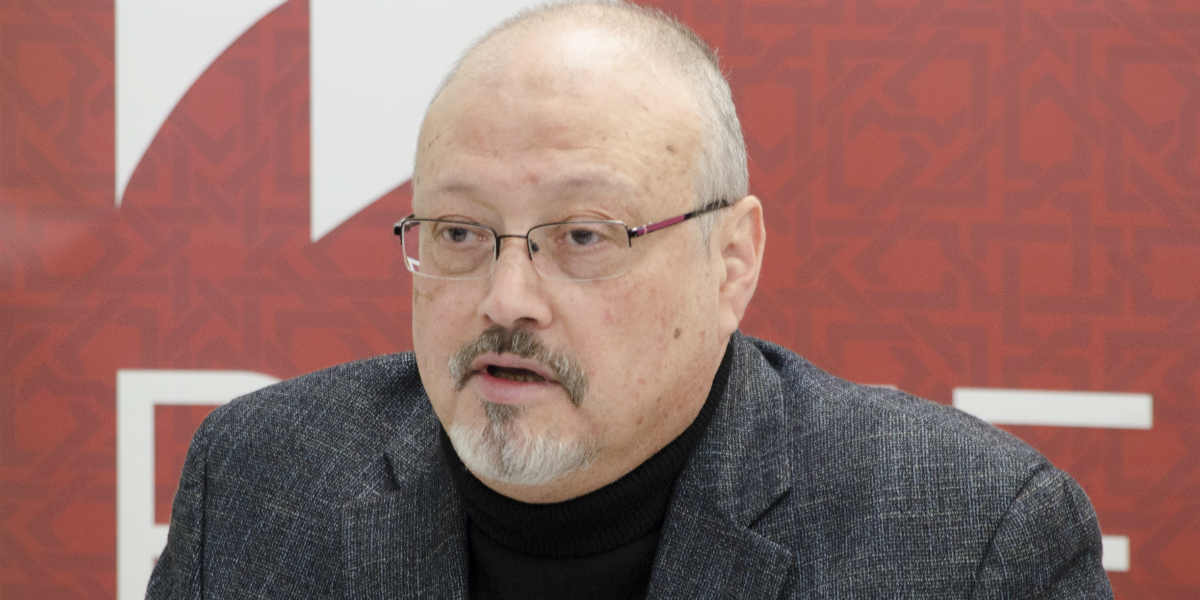 I interviewed Jamal Khashoggi in Jeddah in December, 2001, months after 9/11. What struck me were his strong opinions on the Palestinian issue. Since US military action in Afghanistan, following the destruction of the twin towers in New York, was the big story, that naturally was the focus of my interview (click here to view it) but Palestine is what riled Khashoggi.

The manner in which Saudi Crown Prince Mohammad bin Salman has upturned his country’s policy on Palestine may have been one of the issues on which Jamal Khashoggi differed with the Prince so sharply in his public talks that he had to pay for with his life. He was unhappy with MBS’s opposition to the Arab Spring, his growing authoritarianism, but Palestine was an angst he carried. If he changed his views in his last years I would not know.

Khashoggi was valued by visiting journalists for a simple reason: he was well informed. He was plugged into the kingdom’s caverns of power. His role as a foreign correspondent in Afghanistan, South Sudan, various news spots in West Asia and elsewhere, enhanced his own level of interaction within the Kingdom. His field reports made him interesting to practitioners of power. This had a multiplier effect when he met journalists outside – Thomas Friedman of the New York Times, for instance.

Friedman has, more or less, admitted that Khashoggi was his “Deep Throat” on the Kingdom, except that Friedman was unable to protect his “Deep Throat” the way Woodward and Bernstein protected theirs. How naïve could Friedman have been. He writes: “Jamal had come to my office a few days ago for a long talk about Saudi Arabia and MBS.” Are we to understand that a high profile Saudi informer, visits a higher profile New York Times columnist in the iconic NYT building and intelligence agents from the Kingdom, Israel, the US missed the story? MBS had personally invested in Friedman; his revisionism rankled.

Pressure was applied on Khashoggi to return to Saudi Arabia. He had left the country in September 2017 just before MBS arrested Princes, business tycoons and other influential Saudis and parked them in one of the world’s most luxurious hotels, Ritz-Carlton, Riyadh. He obviously had an inkling of what was to happen.

Immediately, MBS’s propaganda machine went into top gear. Early kudos for the reform minded Crown Prince came from none other than Lyse Doucet of the BBC. She walked on tip-toes, through the hotel’s chandeliered corridor, speaking in whispers lest the incarcerated Princes were disturbed. Peering through the grill were CNN’s John Defterios and Richard Quest. The most powerful in the Western media had turned up to blow trumpets. It was command performance on an epic scale. There you had the world’s “free press”, captive to petro dollars.

Khashoggi’s macabre end is great tragedy and yet the convulsions in which the world media and nodal points of global power are remains a puzzle. Hundreds of journalists are killed each year even in functioning democracies. Saudis are not even known for free speech.

In MBS framework the pride of place was reserved for Friedman, who was invited to the Royal Family’s (in his words) “ornate adobe-walled palace in Ouja” where “MBS spoke in English, while his brother Khalid and several senior ministers shared different lamb dishes and spiced the conversation” which lasted four hours. The succulence of the Kebabs inspired Friedman to purple prose on MBS.

Just when the 33-year-old Crown Prince was beginning to wallow in all the manufactured publicity, Friedman began to worry about his credibility. The information base for revised versions was presumably provided by the likes of Khashoggi.

It turns out that MBS is not the only Saudi Crown Prince Friedman has savoured lamb dishes with. Remember the late Saudi king Abdullah? Well, he was Crown Prince in February 2002 when Friedman turned up: “I am currently in Saudi Arabia on a visit – part of the Saudi opening to the world in light of the fact that 15 Saudis were involved in the September 11 attacks. So I took the opportunity of a dinner with the Crown Prince” – lamb kebabs again.

Friedman drew Abdullah’s attention to a column he had written on the Israeli-Palestinian impasse: in return for a total withdrawal by Israel to the June 4, 1967 lines, and the establishment of a Palestinian state, the 22 members of the Arab League should offer Israel full diplomatic relations, normalized trade and security.

“Have you broken into my desk?” asked Abdullah on hearing the proposal. He was ready with his own speech spelling out exactly the ideas in Friedman’s column. This became famous as Crown Prince Abdullah’s peace proposal. As we now know they went nowhere.

The ideas in the Abdullah package had been in the works when I met Khashoggi. The reason they lay in Abdullah’s desk was because there were no takers for the ideas in Israel. Indeed, Ariel Sharon’s actions against the Palestinians were generating anger even among the Saudi ruling class. Prince Turki bin Faisal was the most consistent critic. Khashoggi had been the closest to Turki bin Faisal, having been his spokesman when the Prince was the Intelligence Chief.

There remains a divide in Arab ruling circles, including in Saudi Arabia: one section of the elite is unwilling to accept the primacy of the Shia-Sunni divide as the principal faultline defining the Arab world. The contrived faultline, this group believes, is an effort to devalue the Palestinian cause.

Khashoggi’s mentor, Prince Turki, told a gathering in New York recently: there is a large Shia minority in the oil bearing eastern part of Saudi Arabia. Likewise there are Shia minorities in all the Gulf States. “How then can we endorse Shia-Sunni as the basic conflict?” This was Khashoggi’s line too.