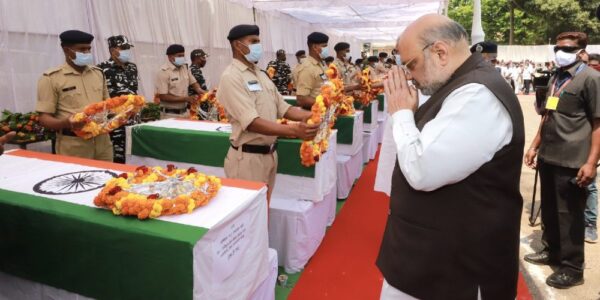 Maoists on Saturday killed 14 people in two major separate poll-related strikes in Chhattisgarh's Bastar region. Six jawans of 80 Battalion of CRPF lost their lives in an IED blast in Darbha Ghati. Five jawans were also injured in this attack, out of which two are reported to be seriously wounded.

In an another strike, seven officials on polling duty were killed when Maoists blew their bus in Bijapur district.

In Aurangabad, a journalist could reach the location where medical teams could not despite being on major road axis! The journalist had a field day in filing his ‘story’. To make his ‘story’ sensational the rank of the imploring and bleeding CRPF Constable (Dilip), was changed to Deputy Commandant (Indrajeet Singh). His ‘story’ took a callous turn when he began questioning the perniciously bleeding Constable about the details of the mine blast. It was only in the evening that it was clarified the Deputy Commandant had died much before and the constable is still alive.

This journalistic omission or commission or both, is symptomatic of the blasé attitude of the ‘press’ with regard to the casualties of security forces.

Here are some photos of injured CRPF jawans being shifted to Ramkrishna care hospital in Raipur following the Maoists attack near Tongpal in Dantewada district of Chhattisgarh on Tuesday morning. Sixteen CRPF jawans have been killed in the attack besides a villager.

Shocking details about the structure of CPI (Maoist) and its internal processes have come to light. The revelations were made by a very senior group leader, Mihir Besra, who was captured in 2007.

According to the interrogation report of Besra, the 9th Congress of the group met in January 2007 in Bihar and many important operational decisions were taken in it.