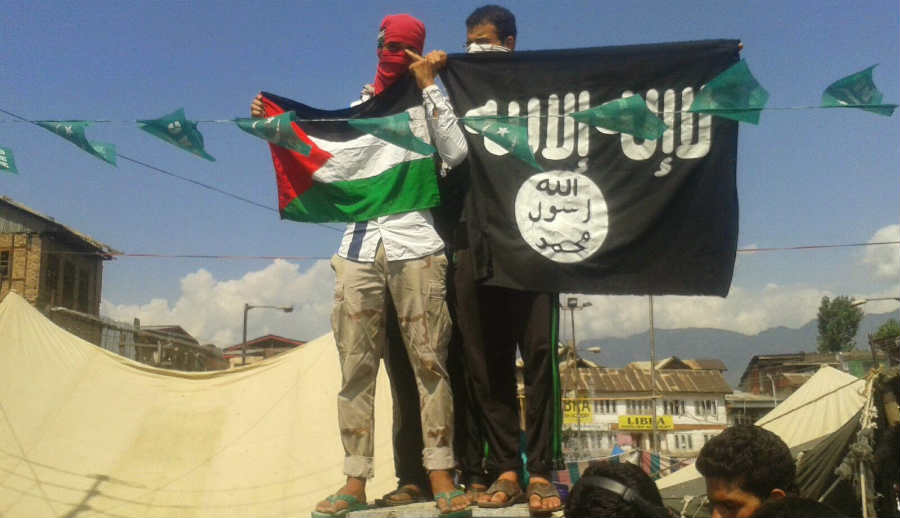 In Kashmir the linkage between Friday prayers or religious gatherings, and demonstration of ISIS flags is, therefore unmistakable.

Despite these incidents or show of solidarity with the idea of Islamic Caliphate in the Kashmir Valley, on no less than three occasions in five months, the Hon’ble Chief Minister of Jammu & Kashmir Mr Omar Abdullah maintains that there is no ISIS in Kashmir, and all the reports and visual footage is a hype created by the media. Significantly, the Chief Minister made comments to this effect as he emerged from the Union Home Minister’s office.

Mr Abdullah should be very concerned that the last two incidents took place even as the State is struggling to recover from the most devastating floods in the history of that land. During these floods, the Indian Armed Forces put their own families and lives at stake to provide rescue, relief and rehabilitation to the affected, which includes the ‘separatist leaders’. The same separatist leaders who after being rescued, tried to hijack relief material once the situation abated.

Mr. Abdullah, the young Chief Minister of J&K, should be disturbed at the abysmal dehumanization of elements within the population. They are only confined to the Kashmir Valley of the State. No floods and no outreach by the Union could wean these elements from the path of religious radicalization. How diabolical?

The entire country rallied behind the flood affected in Kashmir. Goodwill and resources flowed and continue to flow. The per capita expenditure by the Union government has always been highest with regard to Kashmir. These elements in the Kashmir Valley have defied the oft repeated logic that development unites. Even after the floods, the separatists continue to clamour for Pakistan, which was created as a homeland for Muslims. The Ahamadiyas and Shias find this homeland veritable hell. The violence against Shias and Ahamadiyas, leave alone the barbarism against Hindus and Christians, have deflated all the pretentions of Pakistan being secular in governance.

Do these separatists by inviting the ISIS want to purge the Shias in J&K in their desire to join the failed state of Pakistan? It appears so, because the ISIS that they support is rabidly anti-Shia. In fact, the ISIS speaks of Sunni supremacy. The Islamic caliphate that they envisage has only a subsidiary and subordinate status for Shias.

The ISIS spokesperson Abu Mohammad al-Adnani has spoken about transforming Iraq into a living hell for Shias and called for destruction of Nazaf and Karbala. In fact, the guiding philosophy of ISIS is not ‘anti-Westernism’ or ‘pan-Islamism’, it is patently and unequivocally ‘pan-Sunnism’.

No jihadi discourse has elicited as much support as ISIS. There has been unprecedented support from even Western countries. Youth, both male and female, have joined the ranks of the ISIS from Britain, Australia, France, Belgium, Denmark etc. In India, there have been reports of few youth hailing from Maharashtra, fighting on behalf of the ISIS. There have been also reports of youth from Hyderabad moving all the way to West Bengal on their way to Bangladesh with the ultimate objective of joining the ISIS. Does the Burdwan incident, wherein bombs accidentally detonated during manufacture, have any links with the ISIS? It is plausible, given the anxiousness displayed by the culprits and some collusive state government officials to remove the vestiges of the conspiracy and network! There is increasing evidence that following the crackdown on jihadi outfits in Bangladesh by Sheikh Haseena government, West Bengal has emerged as the new terror epicenter. These relocated fundamentalist organisations and jihadis are considered to be politically useful! Some youth from Tamil Nadu flaunted a group photograph with all of them sporting Islamic State emblem T-shirts. Two men were arrested for ordering these ISIS T-shirts.

Some analysts are of the view that the strong emotional appeal of ISIS, or its capacity for online indoctrination is because unlike other global jihadi movements in the past, this is predominantly rooted in anti-Shia discourse. In other words, anti-Shiaism or pan-Sunnism has triumphed over pan-Islamism. It can be therefore inferred that historically and inherently the Shia-Sunni divide therefore runs deep and wide.

Mr Omar Abdullah should be concerned that this pan-Sunni discourse of ISIS may engender deep divide between the Shias and Sunnis, not only in his state but also in other parts of the country. The Times of India (August 2, 2014) highlighted the unease of Valley’s Shia population and attributed a statement by one resident of old city in Srinagar, Mirza Hussian: “We fear this may put our lives at risk since the ISIS leader is targeting the Shias, besides Islamic shrines and monuments”.

The reverberations of the ISIS discourse have been felt in other parts of India. In June this year, the call to arms by Iraq’s top Shiite cleric Grand Ayatollah Ali al-Sistani for protection of Shia religious shrines in Iraq, did galvanize segments of the Shia population in India. The anti-Shia discourse of the ISIS has also provoked clashes between Shias and Sunnis in old parts of Lucknow city.

The Hon’ble Chief Minister of J&K should be concerned by the transcripts of communication (Indian Express report dated 13 October 2014, attributed to NIA) between the jihadis based in Pakistan and India. It is clear from these communications that the various jihadi groups like Al Qaeda, Taliban, LeT and ISIS may be in competitive mode but are certainly not adversarial. It emerges that career choice is being made by the jihadis in choosing the various jihadi groups depending on their proclivities and convenience. The Chairman of the United Jihad Council, Syed Salahuddin, has sought help from Al Qaeda and other transnational organizations like the ISIS for liberation of Kashmir. Various jihadi groups based in Pakistan, like Sipahi-e-Sabha, Lashkar-e-Jhangvi (LeJ), and a splinter group of Taliban Tahrik-e-Khilafat have openly expressed support for the ISIS.

Is the ISIS, therefore, Mr Abdullah, a convenient organization for the separatists to be used as a subterfuge and for the purposes of deniability?

And finally, Hon’ble Chief Minister, it should worry you that the map of the Islamic Caliphate envisaged by Mr Baghdadi includes Kashmir. You should be a worried man Mr Chief Minister and so should be all politicians in the Kashmir Valley. If it is not so, then it can be assumed that there are anti-nationals and separatists in many political shades as well. The term, ‘soft separatists’, is no doubt gaining currency.

One thought on “Why ISIS should torment Omar Abdullah?”