The United State of America undertook one of the most secret projects, led by the CIA in coordination with various US agencies, between 1968-74. Media reports in 1975 praised the CIA for pursuing one of the most imaginative intelligence gathering operation of great magnitude and complexity. Unsubstantiated reports about the project appeared in the US media in 1975, but most of the aspects of the operation remained classified till now.

So, what is Project Azorian? It was a CIA codename for one of its most ambitious plan to recover a sunken Soviet submarine from the floor of the Pacific Ocean. A recently released CIA document, an article (Project Azorian: The Story of the Hughes Glomar Explorer) published in the fall 1985 edition of the agency’s in-house journal Studies in Intelligence, details the events from conception and planning to the retrieval of the submarine in August 1974. The declassified document, in possession with Canary Trap, does not include all the information on the project as some of it is still considered highly sensitive.

Sometime in mid-March 1968, a Soviet Golf-II class submarine (K-129) sank 1560 miles northwest of Hawaii along with its entire crew. The submarine, which was carrying nuclear ballistic missiles, was located 16500 feet below the surface of the Pacific Ocean. The declassified document does not mention how the submarine was located by the US.

The Soviet undertook a massive two-month search operation to locate and recover the submarine but ended up with no success. Senior officials in the US Department of Defense (DoD) and the CIA “recognized that if it were feasible to devise a plan to recover important components of the submarine, extremely valuable information on Soviet strategic capabilities would be obtained,” the document states. 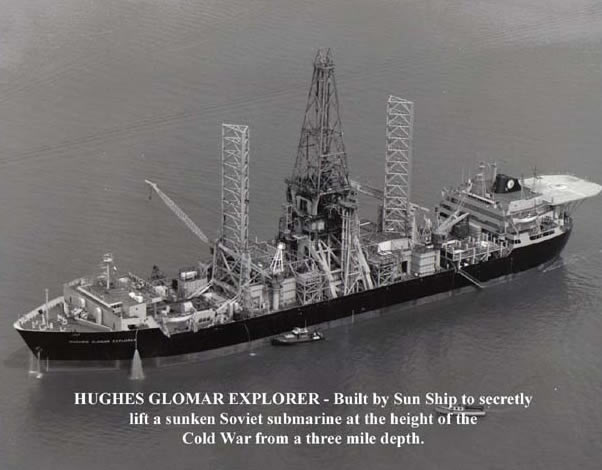 Representatives of the CIA and DoD began discussing the feasibility of recovering components of K-129 during late 1968 and early 1969. CIA was tasked to lead the project and according to the document “on July 1, 1969, it established the Special Projects Staff within its Directorate of Science and Technology to manage Project Azorian.”

On August 8, 1969, a high-level Executive Committee was briefed about the proposed organization for the submarine recovery effort. The details of the briefing included structure of the organization, management, assets, personnel assignments, and intelligence objectives.

The expected intelligence benefits from the project — mentioned in the recently declassified CIA document — were as follows:

Then US President Richard Nixon approved the creation of the task force to recover the submarine in August 1969. The operation was extremely secret and right from its inception, extraordinary security was imposed and clearances to know the its details were severely limited. The US agencies understood the importance of keeping the project leak-proof in order to carry out the recovery mission without any diplomatic or physical interference from the Soviets.

The project was immensely challenging and all the agencies involved (including three security cleared defense contractors) explored various technical and operational options in order to carry out the recovery mission. After all, nobody had ever successfully tried to raise an 1750 ton object from the depth of 16500 feet in the ocean.

By late July 1970, the task force came to a decision to use the heavy-lift concept to recover the K-129. The concept involved lifting the estimated 1750 ton object by means of heavy-lifting equipment mounted on a large surface ship. “A deep-sea mining venture was to be used as the cover story for the operation,” the declassified document states.

Senior officials involved in the project were initially less hopeful of successfully lifting the submarine from the seabed. The US government, at one point of time, even thought of canceling the project due to heavy cost overruns. The document states that the only thing that saved the project from being terminated was the potential intelligence information that the US would have got if it succeeded in its operation.

The work to build a ship — to be known as Hughes Glomar Explorer — for undertaking the operation started and it was to be delivered to the CIA on April 20, 1973.

The project faced many problems like huge cost overruns, future international political climate, workers strike, and doubts over expected intelligence gains. Despite all this, President Nixon allowed the project to continue and finally on June 7, 1974, he approved the launch of Project Azorian mission. The Glomar Explorer, after undergoing vigorous sea trials and testing, arrived at the recovery site on July 4, 1974.

The Glomar Explorer’s recovery operations were greatly threatened by almost 14 days of close surveillance of its operations by two Soviet naval vessels. The recovery work continued despite the Soviet presence and necessary directions were issued to destroy sensitive material in case the Russians landed on the ship.

The ship began lifting the Soviet submarine on August 1, 1974 and managed to secure it inside the ship on August 8, 1974.

The declassified CIA document, however, is silent on some very vital information related to the project. It does not state whether the Hughes Glomar Express was able to recover the entire submarine or parts of it. The document does not say anything about whether the project was successful or not.  There is no mention of the strategic information that was obtained from the submarine. Also, no details of the project’s cost has been mentioned.

Let’s hope that someday the CIA will declassify the remaining details of Project Azorian so that the world, specially Americans, would know whether millions (perhaps billions) of dollars of tax-payers money went down the drain or not.

One thought on “The Story of US’s Project Azorian”