This second part will throw light on the massive evidence collected by the law enforcement agencies On Sanatan Sanstha’s open proselytization of terror. The evidence was ignored by Congress-led UPA and now the BJP-led NDA.

Sanatan Sanstha is a terrorist organization. But the Congress-led UPA government in the past and the current BJP-led NDA government have demonstrated utter helplessness in allowing law enforcement agencies to do their job. Yesterday, on national television a Sanatan Sanstha member accepted and admitted that the organization’s member set off Improvised Explosive Devices to “make noise”. Another spokesperson said the organization “does not believe in violence” and its actions aren’t intended to hurt people.

Canary Trap in an earlier article revealed evidence of Sanatan Sanstha providing financial assistance to families of two individual — Ramesh Gadkari and Vikram Bhave — for setting off bomb blasts in Thane and Vashi on June 4, 2008.

Sanatan Sanstha allegedly runs terror training camps for its members in the guise of “self defence training”. The Maharashtra and Goa police have tons of documentary evidence on this. Canary Trap makes public a selection of the voluminous evidence that is gathering dust in the police headquarters of these states and in Home Minister Rajnath Singh’s office. 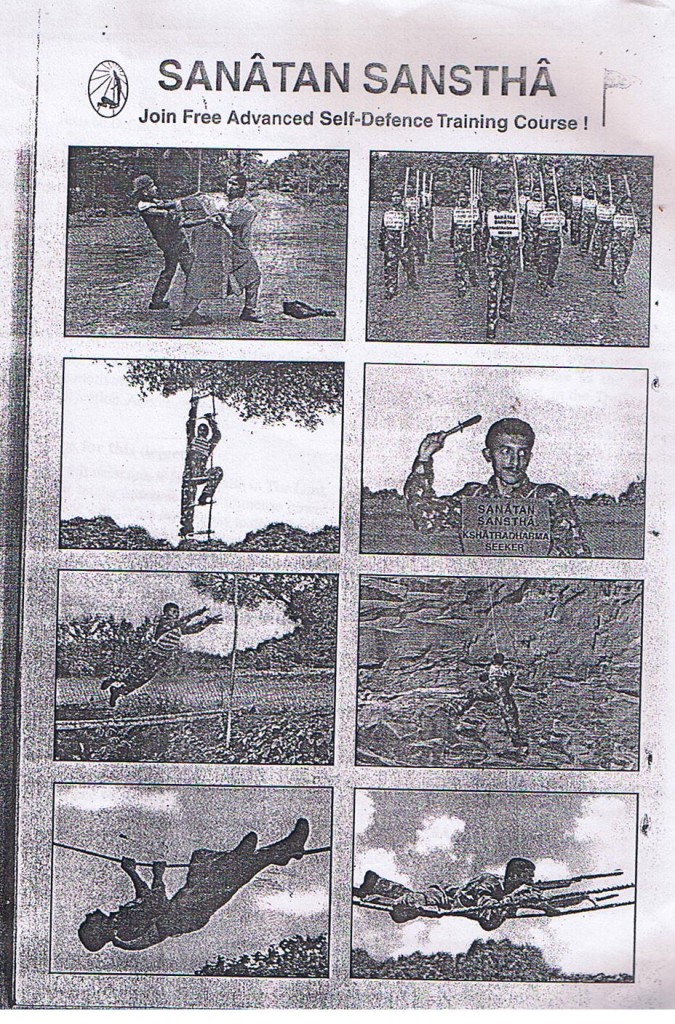 This extremist Hindu cult organization promotes terror and violence in the name of self defence training. Sanatan Sanstha’s self defence training manuals teach its members how to fire a gun, exhorting its members that ”the gaze should be towards the evil doer”. No guesses for who the evil doers are – rationalists, anyone the organization perceives as anti-Hindu, Muslims and Christians. 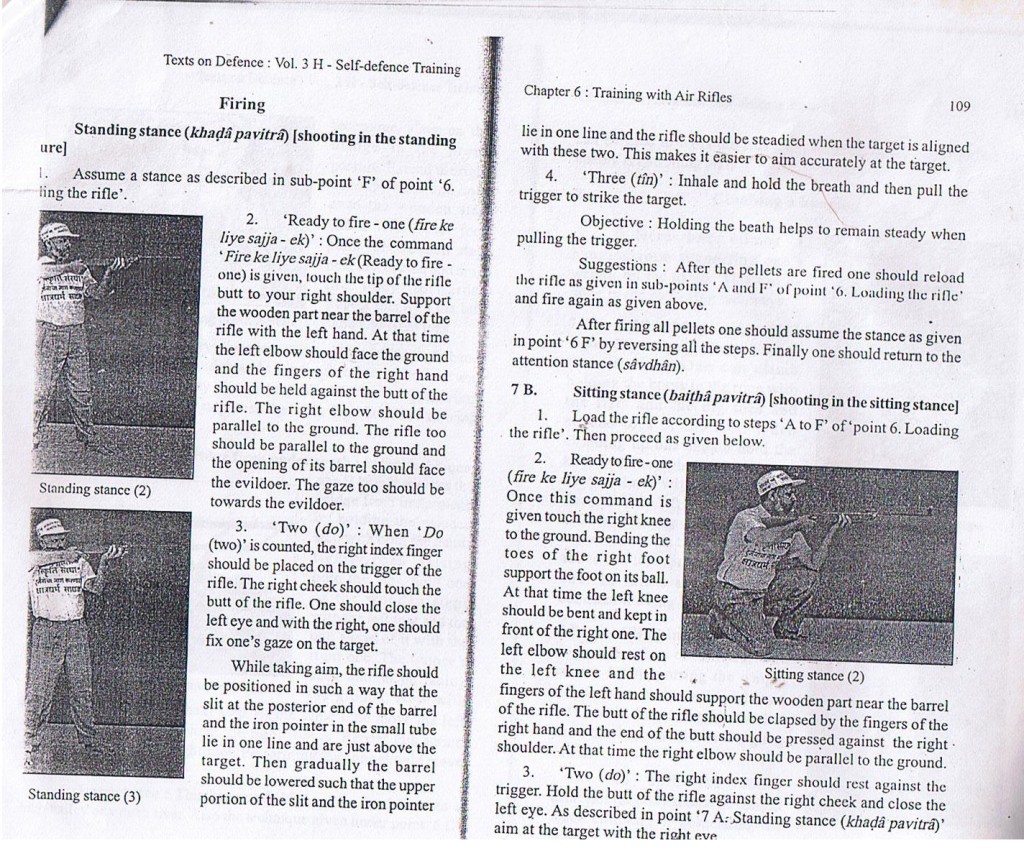 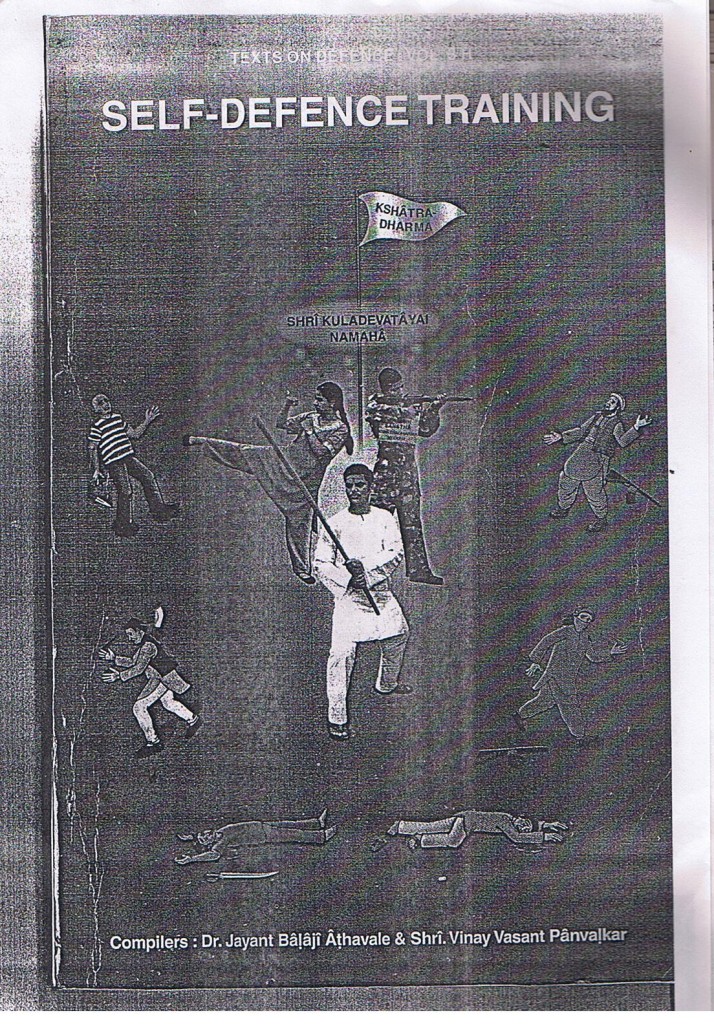 Sanathan Sanstha’s self defence books represent Pakistan and Muslims as demons who the Sanstha says are bent on destroying India. When questioned by media, Abhay Vartak, Spokesperson, Sanathan Sanatha said: “We are protecting the Hindu way of life. We help people at physical level and combating corruption. This can’t be called extremism.” But the organization evades questions on why its publication calls for the creation of “Hindu Terrorists”. For some years now, strategic affairs commentators have rued the use of term “Hindu Terror” because it connotes some sort of similarity with “Islamic Terror”. However, the fact is that it was organization’s like Sanatan Sanstha and Hindu Janajagruti Samiti who openly promoted the idea and terminology of “Hindu Terror” as a means of combating “Islamic Terror” emanating from Pakistan. 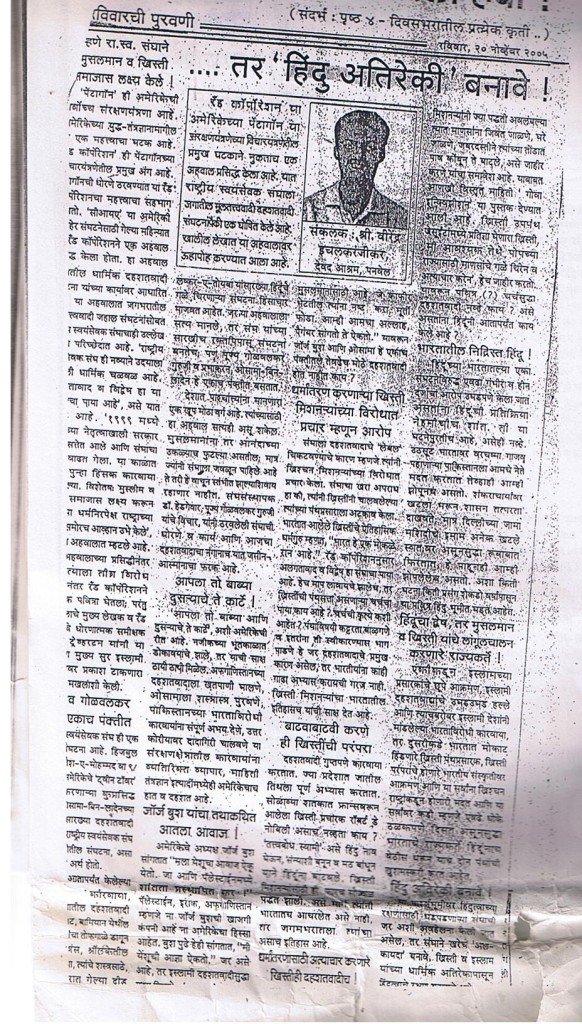 These images below amply demonstrate how Sanatan Sanstha rationalizes its terror activities: 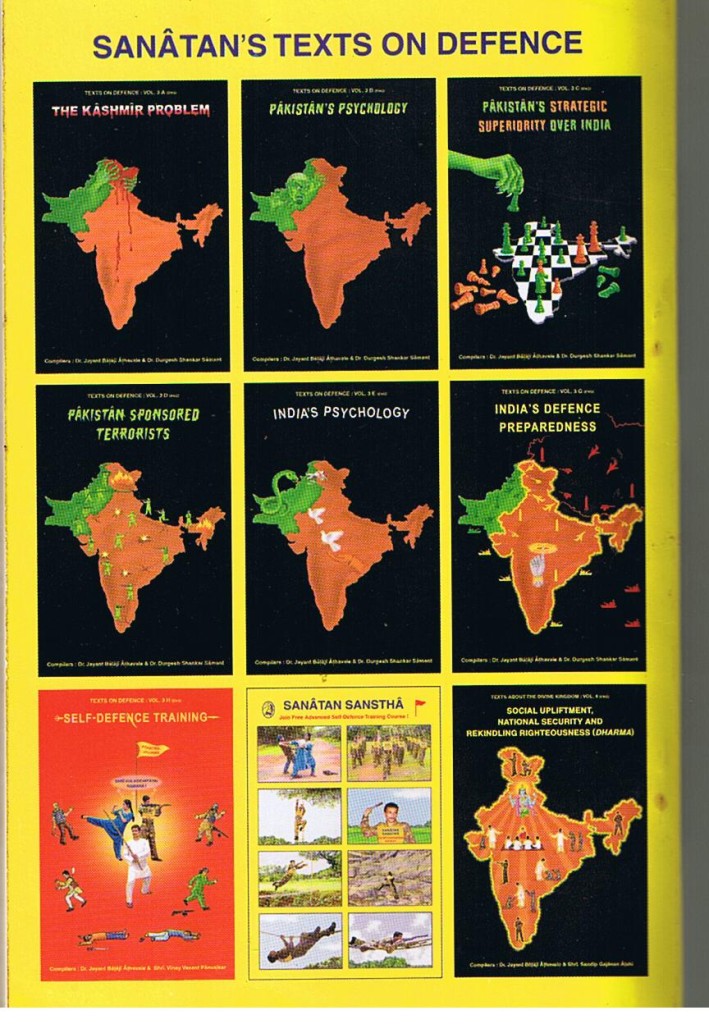 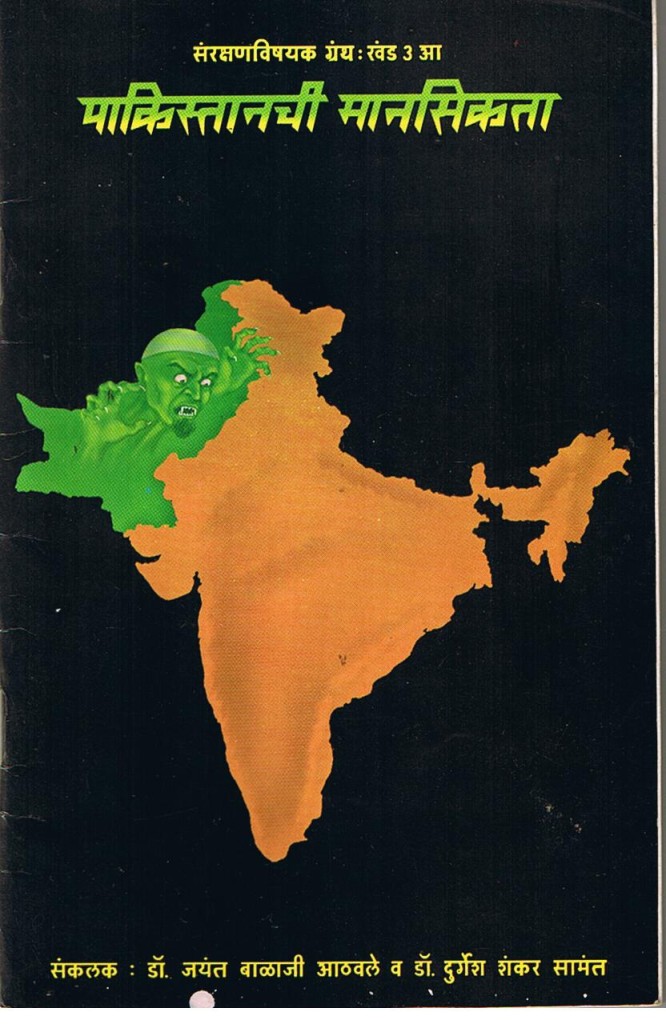 The Hindu extremist cult’s revivalist campaigns have resulted not only in its members undertaking terrorist activities, but sparking riots in Maharashtra. 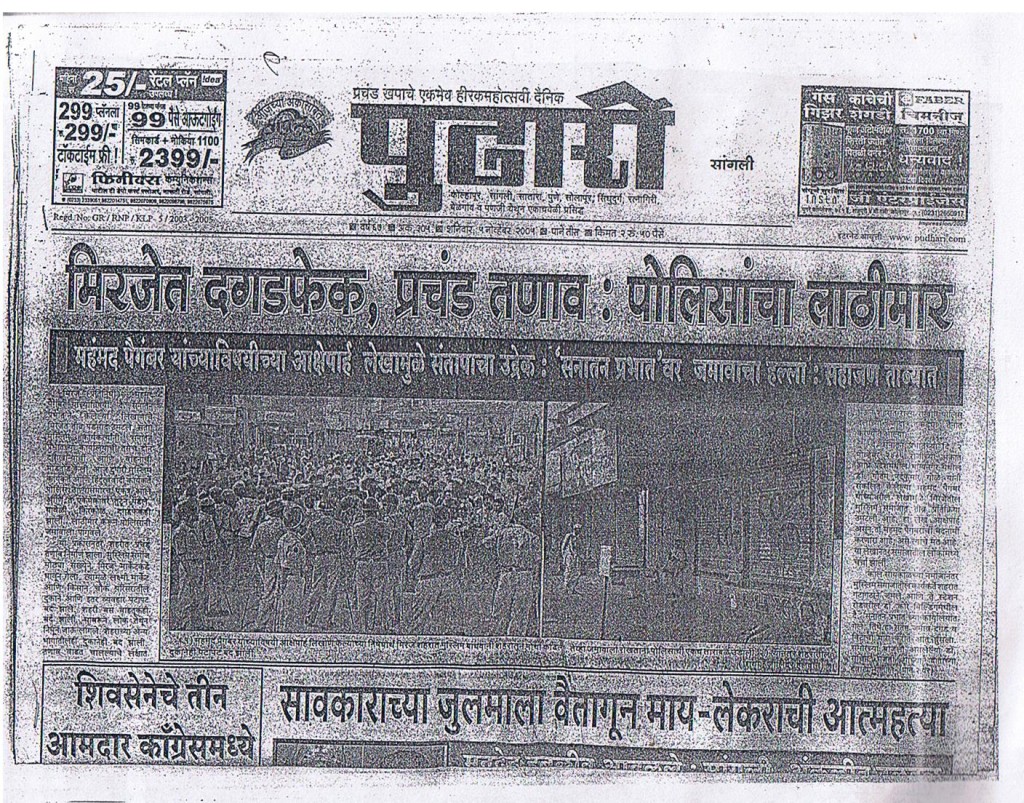 For several years now intelligence units of various agencies have been regularly reporting on Sanatan Sanstha’s worrying proclivity to openly justify its terror methods and radicalize Hindu’s to take up violence as a means of countering perceived insults to the Hindu faith. How and why did the Congress-NCP government in Maharashtra and the current BJP government turned a blind eye to announcements in the cult’s newspaper, Sanatan Prabhat, exhorting its members to become “Hindu naxalites” or its aggressive posturing to form a Hindu nation. 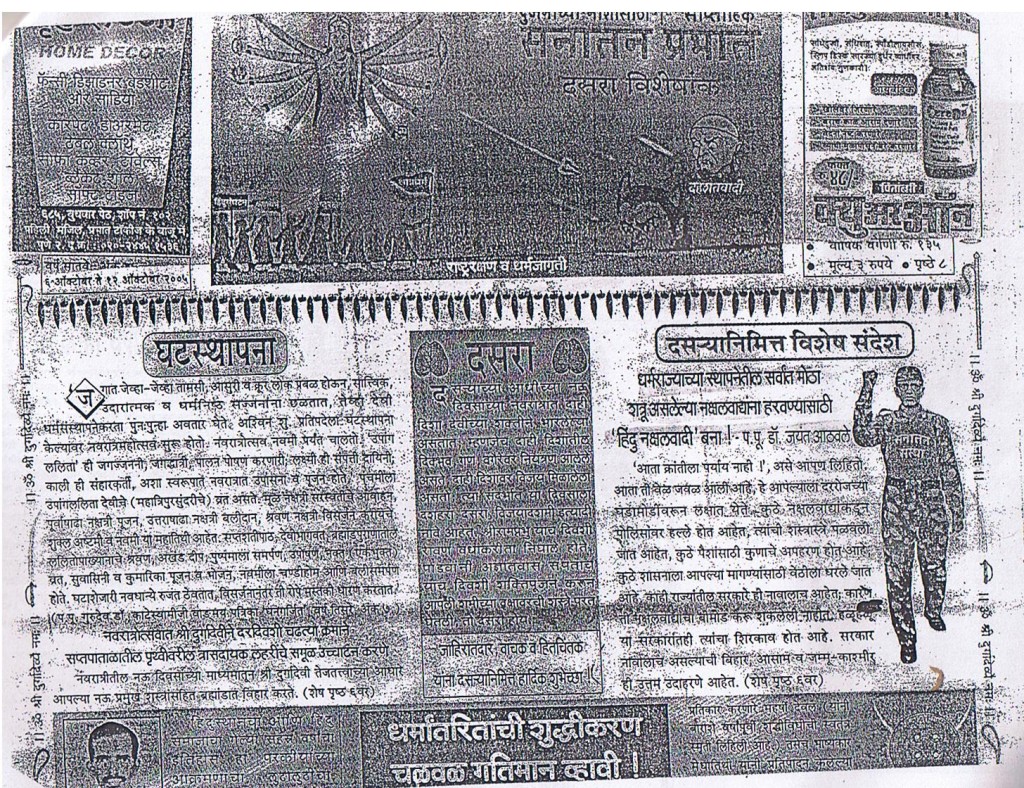 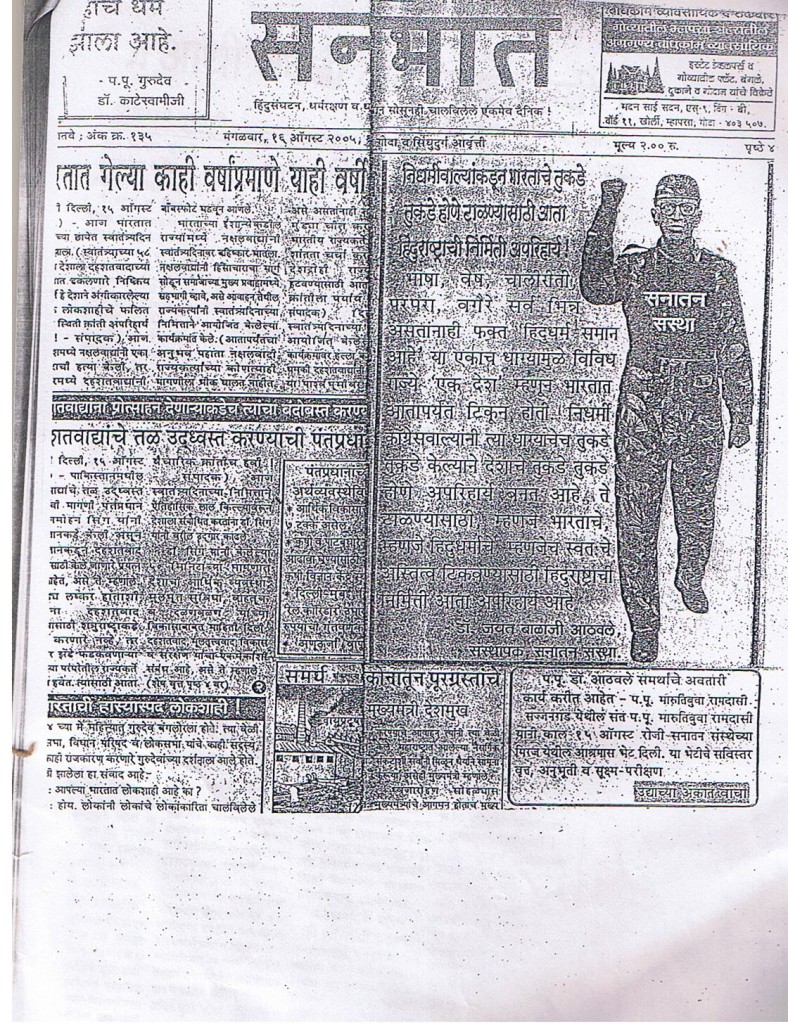 Sanatan Sanstha is an organization that believes that the Hindu community, despite being the majority community, is weak and unable to defend itself. Therefore, according to this extremist Hindu cult, “commando training of its members is mandatory.”  Even groups like the Shiv Sena and MNS will have to explain why they continue to speak up for and support an extremist Hindu organization, which openly proselytizes terrorist acts as a way of protecting the Hindu faith.