This article is going to be based on facts and facts alone. It purports to clearly decipher the process of subversion and use of Kejriwal and his associates by powers and countries inimical to India. Sadly, as invariably the case, there are vested interests at the highest political levels in India, who are part of the design.

The flowchart below gives out the link of foreign funding and subversion of Kejriwal and associates. Each of the links given in the flowchart are backed by documents.

A US Central Intelligence Agency (CIA) secret document (declassified) given below, duly signed by the then Director Allen W. Dulles clearly shows the link between CIA and Rockefeller Foundation, Ford Foundation and Magsaysay Award. It may be mentioned that Dulles was the longest serving Director of CIA from 1953 to 1961. Even in the citation of Kejriwal for Magsaysay Award, the first reference was made to CIA.

The link between CIA and Ford Foundation and Magsaysay Award is yet again reinforced by a secret (declassified) document. The document clearly shows that how so called intellectuals, professors and students of target countries are financially enticed by the Ford Foundation on behalf of CIA to avail education facilities in the US clearly with the purpose of subversion.

The grants given by Ford Foundation in 2002 to various Indian entities are given below in the accessed document. Arvind Kejriwal’s NGO ‘Sampoorna Parivartan’ and CSDS (Center for the Study of Developing Societies) have been granted $80,000 and the $250,000 respectively. Key associates of Arvind Kejriwal like Yogendra Yadav have been functionaries of the CSDS. What makes this funding to Kejriwal a criminal activity is the fact that he in 2002 was still a government servant and therefore not entitled to receive it. Government servants are not permitted to float NGOs without due permission.

Kejriwal, while on study leave and availing full government salary started Parivartan along with Manish Sisodia in 2000-2001. On its website, Parivartan on 10-March-2009 declared that it is not an NGO or a registered organization, and for Income Tax purposes it was an Association of Persons. However, in 2002 the website declared the organization was registered under Societies Registration Act, 1860 and was exempt from Income Tax in Section 80G of 12A of IT Act. This is a clear fraud on India and Indians (Click here to see more).

Further, under the banner of Parivartan, Kejriwal received funds from World Bank for a Jan Sunvai campaign even as the organization was not registered. It is again a criminal act. This funding nearly coincides with the period of Kejriwal resigning from service (not accepted) in 2006, and Ford Foundation funding and grant of Magsaysay Award. In fact, Kejriwal got the Magsaysay Award shortly after he featured in the World Bank report of 2005 (page: 29-33).

Kejriwal branched off from Parivartan to establish yet another NGO, Kabir. As per the documents, Kabir was established on 15 August 2005. This was again illegal, as Kejriwal continued to be in government service. The subversive agenda of the Ford Foundation is quite clear in the contradictions in dates between financial documents declared by Kabir and Ford Foundation. While Kabir claims that the NGO began its operations on 15 August 2005 in which the contribution from Ford Foundation was Rs.43,48,036/-, whereas the annual report of Ford Foundation claims to have made a contribution to Kabir to the tune of $172,000 on 15 July 2005. It is not only intriguing that the Ford Foundation funding to Kabir began from the very first year of its operation, but the money was given one month before its birth. The fraud is evident from the two sets of documents of Kabir and Ford Foundation, given below.

However, the fraud can be nailed by visiting the Ford Foundation website http://www.fordfoundation.org/grants/grantdetails?grantid=107117 (again suppressed), which clearly indicates that in the year 2007-2008, Kabir received $1,97,000 and the very next year Rs.60,75,149 (Kabir website, details suppressed again).

The hide and seek being played on the net by Kabir and Ford Foundation is testimony to the fraud. In fact, Parivartan and Kabir, suddenly shutdown their websites after coming under scrutiny in 2012.

Kejriwal received the Ashoka fellowship in 2004. He conveyed an impression that the outreach to him was by an Indian organization. In reality Ashoka is an US registered organization, whose strategic partners include McKinsey & Company, Corporate Executive Board and Latham and Watkins (Ref: https://www.ashoka.org/sites/ashoka/files/form990-2004.pdf). Since the Cold War, this organization has been engaged in creating human assets for expanding American influence. 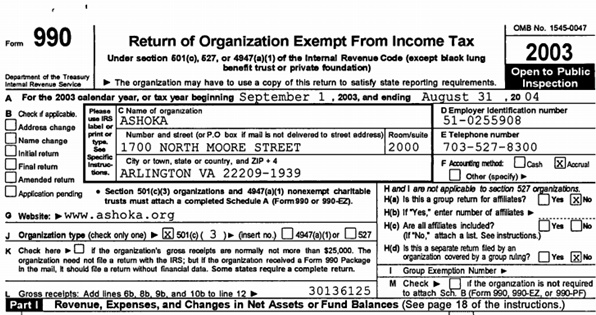 It emerges that after liberal funding from various Western sources, Kejriwal decided to send his resignation from government service in 2006. This story began in 2002, when his ‘Sampooran Parivartan’ was given $80,000 (Ref: http://www.fordfoundation.org/pdfs/library/ar2002.pdf, Page: 104) 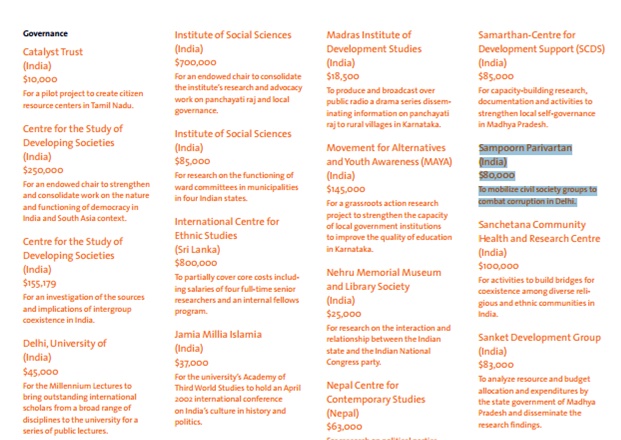 $80,000 in 2002 was equivalent to Kejriwal’s 15 years’ salary. Moreover, the biggest fraud is that the donors, i.e. organizations that funded Kejriwal’s so-called NGOs were the decision makers in the award of his Magsaysay Award. This includes the CIA. Further, the representative of Ford Foundation on India Steven Solnick admitted on 31st August 2012 that the Magsaysay Award for Kejriwal was funded by them.

The link 6 in the Chart at the start indicates recipients of the funds by the Dutch entity Humanistic Institute for Cooperation with Developing Countries (HIVOS). It provided € 1.3 million between 2008 and 2012. Of these more than half, i.e. DISHA, GKVP, SAFAR, MAHITI, SWATI, and UTHAN are active in Gujarat. The others like CJP run by Teesta Setalvad and ANHAD run by Shabnam Hashmi are known for their virulent anti-Modi campaign.

HIVOS in turn is the highest recipient of funds from Ford Foundation. It has an office in India receiving $1.2 million (Ref.: http://www.fordfoundation.org/Grants/Search?searchphrase=kabeer). HIVOS also funded Kejriwal’s Parivartan (http://www.hivos.nl/eng/content/view/full/96/(sector)/10000025/(country)/10000011).

There are various other organizations funded by the Dutch government i.e. PSO Association and PRIA. These organizations ostensibly are engaged in ‘development and social work’, however their main purpose is to promote American agenda. The US adopts the Dutch route in various target countries so that suspicions are not aroused. HIVOS receives €27 million from the Dutch government and funds the PRIA, which is also a Ford Foundation partner. Another PSO partner Soliaridad also funds PRIA. PRIA funded Kejriwal as well. Many countries have compelled the PSO to windup its activities as they have been found to be intrusive.

Another Dutch funded organization is PANOS, which has seven offices in South Asia. This too is recipient of funds from Ford Foundation and its main purpose is to manipulate the media ‘in South Asia’. So is it surprising that a segment of Indian electronic media has gone to vulgar extent in amplifying Kejriwal? The funding of the Dutch entities as mentioned by the Ford Foundation is evidenced by the document placed below: 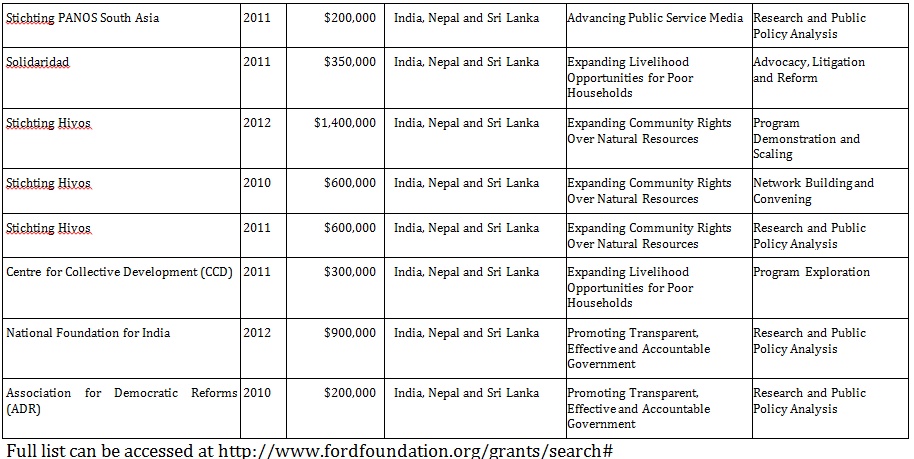 Collusion between CIA and Kejriwal

All the documents above suggest the alleged systematic subversion and creation of Kejriwal by the CIA through the Ford Foundation and the Dutch entities. A CIA document clearly establishes as to how CIA loans officers to Ford Foundation. 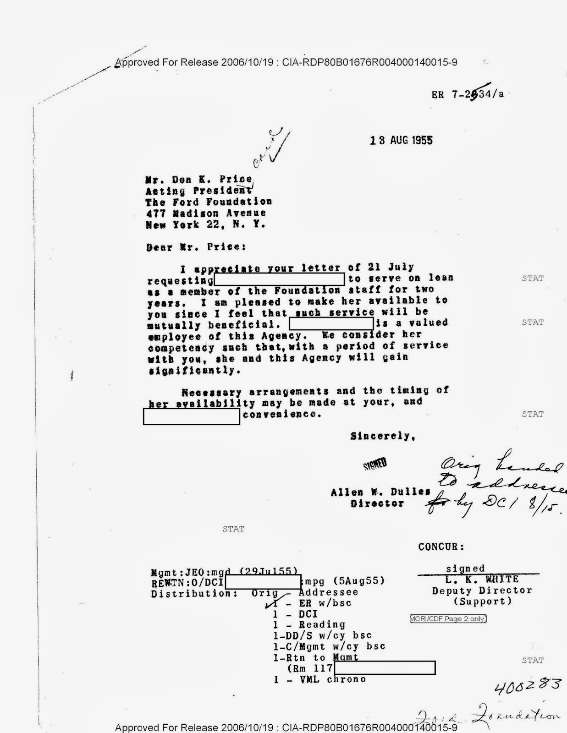 It has also been established that CIA operatives operate through the academic route. One such academic researcher Ms Shimrit Lee was associated with Kejriwal’s Kabir NGO in the garb of doing research on ‘Public Power: India and Other Democracies’. Ms Lee specializes in Tahrir Square type demonstrations that we are now witnessing in Ukraine. She has been active in Cairo, Haifa, Chad and Israel, India and US. It is she who introduced the ideas of Mohalla Committees and brought the Arab Spring technology to India to launch Kejriwal. Ms Lee’s photograph is given below: 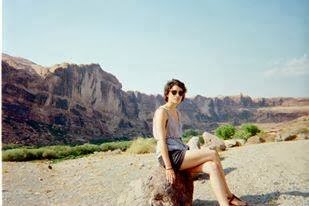 That the US has been using the Dutch for pushing its agenda in India, which includes destabilization of India’s Northeast is known. It is evident by the bonhomie between Netherlands and various Naga outfits, particularly the NSCN (IM). It was the NSCN (IM) which took umbrage when on 17-July-2002 in a written reply to a question in parliament, the late Digvijay Singh then Minister of External Affairs said that Netherlands was one of the countries where terrorists have safe heavens besides Pakistan. It may also be reiterated that the NSCN (IM) always insists on holding talks with the Indian government in Amsterdam. It is also well known as to how the CIA and the Dutch Intelligence Agency (BVD – Binenlandise Veiligheidsdienst) connived in allowing AQ Khan to steal nuclear secrets from URENCO, site at Almeto in Netherlands, only with the purpose of balancing Pakistan with India in nuclear capability during the Cold War. It is through this kind of geopolitical balancing in various regions that the US maintains its lead role.

Just as in the case of lead role by geopolitical balancing the Western countries maintain their supremacy in global economy through the ‘offshore financial centers’. These centers thrive on black money of the developing world. Was it for this reason that Kejriwal was created to kill Ramdev’s movement for recovery of black money stashed abroad? During the entire Anna agitation, not even once, the issue of black money in foreign soil was raised.

In pursuit of the CIA agenda there are Indians who have been partnering Kejriwal. Is it a coincidence that a former Admiral also a recipient of Magsaysay Award accompanied Kejriwal when he filed his nomination from New Delhi constituency? This Admiral, whose daughter married to a Pakistani, has been in the forefront against India’s ‘nuclear development’. Is it a mere coincidence that the closest aides of Kejriwal are recipients of funding from Ford Foundation. Is it also a mere coincidence that Kejriwal never served out of Delhi during his government service, and helping him in this bid was none other than Mrs. Sonia Gandhi, who wrote a letter to ensure the same? Is it also a mere coincidence that Arvind Kejriwal is a protégé of Aruna Roy, another recipient of Magsaysay Award, and a member of Sonia’s National Advisory Council?

Arvind Kejriwal is therefore not a political threat but a security threat to this country, his main objective being to destabilize India to perpetuate US agenda.