Six-and-half decades later, while the debate on India’s best prime minister can be agreeably contentious and healthy, the choice becomes absolutely restricted and nauseating when it comes to choosing the worst. On embarking on this exercise it is therefore only appropriate to spell some parameters.

To begin with it may be said that on Independence we gave ourselves a resplendent Constitution which envisages a popularly elected head of the executive called the prime minister. The spirit of the Constitution is mutilated whenever the country is thrust with a prime minister who is not a popular leader. It is because a selected prime minister inherently feels that he owes nothing to the people of this country and survives on ‘extra-constitutional’ mandate given by ‘extra-constitutional’ powers which invariably have ‘extra-territorial’ loyalty and distraction 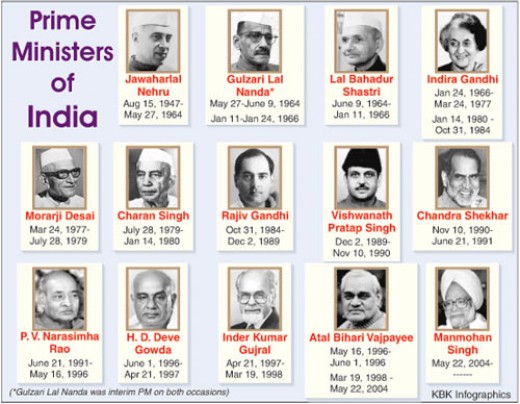 As the guiding leader of the country a prime minister should have vision, to realize which, he should weld the requisite team called the Cabinet. No member of the team should look beyond his shoulder. All that they should be aspiring for is praise and satisfaction of the head of the cabinet i.e the prime minister. They must worry his displeasure. Rewards and punishments to Cabinet colleagues should be sole prerogative of the leader. No other person in the ruling party or the coalition should be able to dwarf the prime minister by issuing certificates of performance from time to time.

A prime minister need not be a fiery orator but should be politically articulate and must exude political conviction. A person who cannot enthuse others by his communication skills can be anything but a leader. Often the eyes of leaders do more talking than their tongues. Being visually blank and tongue-tied cannot be passed off as decency which in turn cannot be a substitute for effective and transparent communications. As a young boy when Churchill was selected for Royal Military College, Sandhurst he went to the doctor to get rid of the lisp in his speech. When told that his problem was not a disqualification for the military he astonished the doctor by saying that he intended to serve as a soldier for only a few years, following which he would take to politics and become a statesman.

A prime minister should not have ostentatious life style and must avoid conspicuous consumption but more importantly should brook no corruption even by coalition partners. The integrity in the governance by the prime minister can be gauged by the number and scale of judicial interventions in exposing corruption in the government. It is not only an indictment of the government but the institution of executive and the constitutional imbalance between the organs of the State. Other organs are forced to assert when the executive becomes corrupt and morally weak. Only a prime minister with depraved sense of nationalism will allow his cabinet colleagues to abuse and erode constitutional institutions. Any opposition which allows a prime minister to continue who consciously or otherwise facilitates corruption is equally guilty of sedition.

Body language and demeanour are vital attributes of a prime minister. He should be able to look straight into the eyes of the leaders of other countries. He should treat ‘certificates’ or endorsements by global leaders on his performance with nonchalance if not suspicion. It’s his certificates which should create ripples in the international arena. No world leader should have the gumption to adopt a supercilious, haughty or indulgent posture in dealing with him or her, least of all patting on the back. When it comes to national interest a prime minister should be a tough customer. A compromised prime minister will substantially lack in such attributes.

During the independence struggle, specially after the end of so called ‘extremist phase’ and beginning of the ‘agitation phase’ the leaders with barrister degree became the spear-heads. Even then there were insinuations regarding subversion of few of them by Intelligence agencies during their stay in Britain. Some of them continued to send their children to that country for general education even after Independence and even if institutions in India had better education to offer. But those were relatively innocent times. It is now no longer secret that countries offer educational and job opportunities to wards of key dignitaries for creating diplomatic and Intelligence leverages. Ideally a prime minister should not have had extended education or employment abroad and his or children should not be citizens of other countries. The danger lies in the fact that this phenomenon by and large is unidirectional. In any case if successive prime ministers have not created educational facilities appropriate for wards of country’s decision makers they have been amiss in their national duty.

Notwithstanding the source of political sustenance the measure of a prime-minister’s patriotism and stature is the manner he or she deals with issues of common concern to the country like security and corruption, no matter who raises it. A conscientious and patriotic prime minister will not downplay issues of corruption and impropriety that rob the very soul of the nation even if his own party members or benefactors are involved. The lack of seriousness say on issues like black money in Swiss banks can be discerned by the people, thanks to the media and more so social media, and is construed as admission of guilt.

A prime minister should also be judged by the level of security the people of the country enjoy and the respect and concern he or she treats the armed forces with. Only a subverted prime minister plays politics with the armed forces and plays one security agency against the other. George Bush during his visit to Andhra Pradesh met American soldiers who were in India for joint military exercise and then had word of advice for the then Chief Minister the Late Y Rajshekhar Reddy as to how a head of state should treat the armed forces.

Confronted with intractable moral dilemmas a prime minister should have the courage to throw it all lest his remaining life and his future generations will live in ignominy and history will be most unkind to him.

Within these essential parameters I leave it for the readers to choose India’s worst prime minister.

(RSN Singh is a former military intelligence officer who later served in the Research & Analysis Wing. The author of two books: Asian Strategic and Military Perspective and Military Factor in Pakistan, he is also a guest blogger for Canary Trap)

3 thoughts on “The Worst Prime Minister”