As India celebrates its 60th Republic Day, one thought that comes to the mind is that where do we stand on the world stage. Despite all the big talk about being a superpower, we still have a long way to go. I had written an article for NDTV.com in 2007 on the same theme and believe me, the situation hasn’t changed much.

“It (India) belongs to the class of countries that are always emerging but never quite arriving,” said a report which measured India’s power a few years back.

Read below the article that I had written.

Is India ready for the big league? 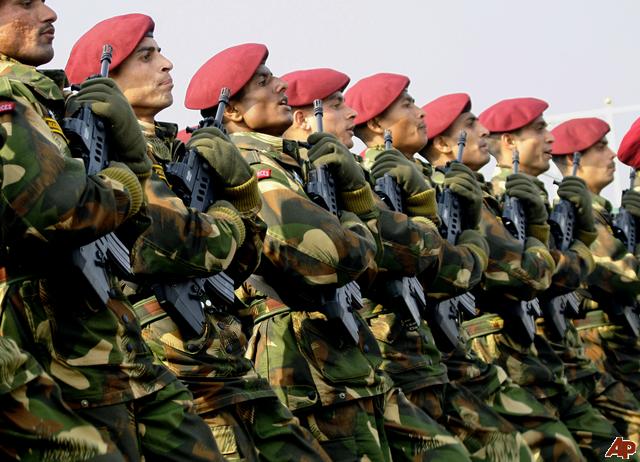 The states, Cardinal Richelieu said, do not receive credit for doing what is right; they are only rewarded for being strong enough to do what is necessary. India, according to many critics, has never practiced this rule of international politics.

The country, in its 60th year of independence, is considered to be an emerging super power, both in economic and military terms. But is India ready for the big league yet?

According to a report that measures India’s world power, there is a sense of uncertainty with regard to India. “It belongs to the class of countries that are always emerging but never quite arriving,” the report states.

Experts state that for India to play a major role on the world stage, the leadership of the country has to evolve a long-term grand strategy that will guide the nation into the future. This is a big challenge given the hostile neighbourhood India has.

According to them, to a great extent the leadership in the county remains stuck in the daily political survival and the pressures of the impending challenges at hand.

There is a view that much emphasis is put on the limited economic success, which India has had till now, to project India as a great emerging power. Experts believe this success is permanently hostage to the large number of internal and external security challenges that confront India today.

Among the numerous viewpoints regarding India’s potential to make it to the big league, one of the most important opinions held by many analysts is that India has even failed to decisively counter the challenge of terrorism directed towards it from its neighbour, which is one-eighth its size.

Experts opine that the defeat and humiliation at the hands of the Chinese in 1962 has been largely overlooked in the planning of future strategies. According to them, there is a lot of hype about India’s emergence as a great power. But as we take credit for limited successes against a small adversary, there is little or no public knowledge of a well laid out doctrine regarding future engagement with a superior power like China.

Analysts believe that the Chinese leadership has repeatedly reiterated that they have no ambitions in South Asia. But the manner in which it has acted – by passing crucial defence technology and weapons to Pakistan, increasing its strategic influence in the Indian Ocean – over the years clearly indicates that its long-term objective was, and continues to remain, the strategic encirclement of India.

The question now is that does India have an adequate level of conventional military capability vis-à-vis China in an event of future confrontation over border issues?

Answers can be found in exclusive news stories reported by NDTV. The Indian Air Force’s fleet is shrinking. Fighter planes are being phased out much faster than they are replaced. Even the first of the many new fighter jets that India proposes to buy will take at least eight years to enter service.

In a secret letter to then Defence Minister Pranab Mukherjee, Air Force Chief, Air Marshal S P Tyagi stated that if the Ministry of Defence delays acquisitions of more fighter jets, IAF will no longer be superior to Pakistan’s PAF.

The other chilling details of the letter, exclusively reported by NDTV states:

Defence analysts state that the People’s Liberation Army Air Force (PLAAF) is numerically and even qualitatively superior to most of the air forces in the region, and the airpower balance vis-à-vis India is gradually turning in China’s favor.

The 148-page Maritime doctrine released by the Indian Navy in April 2004 is concerned about the rapid resurgence of the People’s Liberation Army Navy (PLAN), the only Asian navy with SLBM (Submarine-launched Ballistic Missile) capability.

The doctrine stressed a need for a submarine based credible Minimum Nuclear Deterrence (MND) capability that would enable India to pursue an independent foreign policy in a multi-polar world.

“If India is to exude the quiet confidence of a nation that seeks to be neither deferential nor belligerent, but is aware of its own role in the larger global scheme, it will need to recognise what constitutes strategic currency in a Clausewitzian sense,” the navy Maritime doctrine 148-page analysis asserts.

But according to security analysts, this assertion seems too ambitious for navy whose total strength will come down to just 135 vessels by 2012-15. At present the Indian Navy is around 150-ship force and the optimum level needed for future is 200 vessels.

Even the scenario in the army is no different. India Army is one of the world’s largest forces with over a million soldiers. But a majority of it is tied up in insurgency-infested areas like Jammu and Kashmir and the Northeastern states.

Jaswant Singh, in his book Defending India, has criticized this strategy of withdrawing troops from the border and deploying them on internal security duties.

Although the Indian Army has embarked on a major military modernization drive, there are number of challenges ahead. The army has been experiencing a major shortfall in officers for quite some time now. There is a problem of mid-level officers leaving the force because of low benefits and slow promotion rates.

To understand the seriousness of these issues one needs to refer to a 250-odd page internal assessment report prepared by the army to look into the successes and failures of Operation Vijay mounted during the Kargil conflict.

The points considered for the assessment were mostly taken from the top-secret operational notes with the military operations directorate. Some of the main eye opening details of this secret report, which appeared in the media, include:

Crisis in the security set-up

Apart from these, as reported by NDTV, Indian Defence Ministry documents have revealed that India’s airspace and critical targets, even nuclear installations, may not be as safe from an enemy air strike.

The reason; many of the air defence missiles that are supposed to protect these critical installations have outlived their lives. No new missiles have been brought because its import has been blocked by Indian scientists. They have promised Akash missile, which has failed a number of tests till now.

Till today not one Akash missile has hit a target in anything that even approaches combat conditions, an NDTV report said.

The most prestigious undertaking of India’s Defence Research and Development Organisation (DRDO), the Integrated Guided Missile Development Programme (IGMDP), is an example of repeated failures and waste of public funds.

The organization announced the production of five missiles – Agni, Prithvi, Akash, Trishul, Nag – in July 1983 under IGMDP. Two ballistic missiles, Prithvi and Agni, have been inducted into the services but according to investigative reports appearing in the media their operational readiness is not up to the mark. The case of other three missiles is even worse.

Other major projects that are still not completed include the Light Combat Aircraft (christened ‘Tejas’), and Arjun Main Battle Tank (MBT). The fighter aircraft programme is delayed by 12.5 years and still counting. DRDO exceeded the Arjun tank deadline by 16 years, incurring a cost over-run by 20 times the original estimate.

With these facts in minds, experts say, there is a lot that needs to be done before India becomes an influential player in global affairs.

In terms of military doctrine too, India’s strategy of focusing on a short, intense war can be disastrous. Security analysts point out that the military doctrines even in countries like Russia and the United States of America have failed to grasp the transformations in the fundamental nature of warfare that have occurred.

Iraq is a textbook case, where it was easy for the US to defeat the Iraqi army and take control of the country but the ensuing insurgency across the country has been difficult for them to handle. Similar scenario prevails in Afghanistan where the US and NATO forces are facing challenges in containing the resurgence of Taliban and al-Qaeda elements.

India, then, has to take its national and global security interests seriously and act accordingly. Experts state that the country has to be pro-active in dealing with emerging threats locally and globally.

And India can learn a great deal from its past too. As V S Naipaul stated, in his book India – A Wounded Civilisation: “No civilisation was so little equipped to cope with the outside world; no country was so easily raided and plundered, and learned so little from its disasters.”

It is time now for India to evolve and articulate India’s grand strategy, which would take its security interests into consideration. (With media inputs)

(The article was written for NDTV.com’s web special named “India at Crossroads”)

2 thoughts on “Can India become a superpower?”