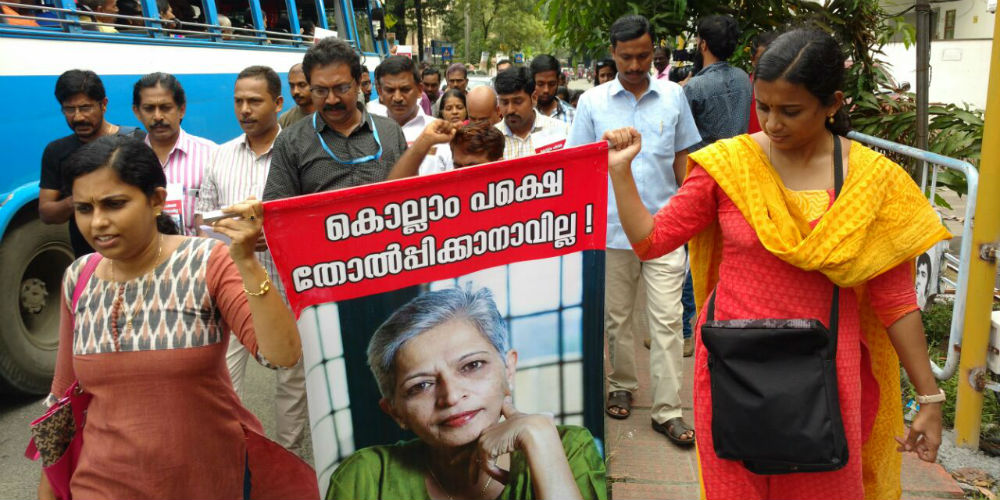 Encouraged by the spontaneous outpouring of sympathy and resolve across the country after Gauri Lankesh’s murder, I began to ferret out my last year’s notebook. The thousands who came out in marches need a regular formation to lean against – a non-doctrinaire Left. Are such movements stirring globally? I fell back on my coverage of events, including elections in the US, Spain, France, the UK and the mayhem in virtually every West Asian country.

Because there is no tradition of coverage of international affairs by Indian journalists, we sometimes miss out on external affairs impacting on our political and social currents.

Let me give you just one example. The post 9/11 global war on terror generated a wave of Islamophobia which, as a reaction, augmented by geometrical progression, cesspools where more terror bred.

When Narendra Modi turned up in Gujarat in October 2001 as Chief Minister, he was not even a member of the state assembly. On October 7, 2001 began the US airstrikes against Afghanistan. Even as the world – India included – remained riveted on the menacing fireworks for months, Islamophobia and terrorism grew apace. The global anti-Muslim atmosphere amplified on world TV was a Godsend for Modi to shape his majoritarian platform in the state and beyond.

New Delhi found itself in the embrace of a global power, buoyed by its recent triumph over the Soviet Union. This victory was marketed not as a victory for human values, but as a triumph of unbridled capitalism. This self image took something of a knock in 2007-08 when the very citadel of capitalism, Lehman Brothers, collapsed. Then other citadels fell.

Indians did not quite see the writing on the wall as starkly as the more creative folks in the West did.

Corporate American greed and crime became the theme of a play which set West End in London ablaze. Enron, based on the power project in Maharashtra, shrouded in corruption, became the most talked about script by playwright Lucy Pebbles. It had an extended run at Broadway as well. The irony, ofcourse, is that the play is based on Enron’s Indian scandal. But India had buried its head in the sand. No libertarian theatre group has ever thought of producing the play in Mumbai or New Delhi.

The post-2008 political restiveness in the West is there for all to see. The word “establishment” has acquired a particularly negative connotation and establishments are under attack from both flanks, Left as well as the right. Everywhere, even in countries where it has held on to power, it has done so by throwing everything into the battle – money and media above all.

In the US even this combination has not worked.

For the Democratic nomination, a liberal Left, Bernie Sanders was way ahead of others in the race but he was grounded citing a 1962 law. It did not matter whom the Republicans nominated because Hillary Clinton, being the darling of the Establishment, would trounce whoever the Republican candidate might be. In their obstinate determination to have Hillary as their nominee, the authors of the script forgot the cardinal point: an anti Establishment electorate was by the Democratic Party’s choice, being required to elect a candidate who was nothing if not the very core of the establishment. Well, they helped manufacture Trump.

Today, in September 2017, opinion polls describe Sanders as the most popular American politician by a long shot. But we also know that the ghost of Joseph McCarthy oversees much of what the establishment does. Will this establishment versus the people deadlock ever be resolved?

The Establishment versus the popular will debate in UK, is poised for an outcome which is healthy for democracy. Oddly enough, my gloom at Gauri Lankesh’s murder, was dispelled by a four deck headline, in large fonts, as the front page lead story in Britain’s most right wing, establishment newspaper – the Sunday Telegraph. The headline read: Tory Rebels Told: Back Brexit or get Corbyn”. When the establishment begins to project the leader of the opposition, Jeremy Corbyn, as the bogeyman, it is reasonable to assume that the establishment does not find itself in good electable health. In any case umpteen polls in recent months give Corbyn a huge advantage.

The novelty of the surprise 39 year old Centre-right Emmanuel Macron provided has worn out quite as rapidly as it had caused the French to be in its thrall. Three months into his Presidency, he is being seen increasingly as power hungry and inexperienced. What has made him look a little silly recently is the $36,000 bill paid to a “make-up” team which helps him conserve his “boyish” looks. His ratings have plummeted, encouraging debate that the more “authentic” peoples’ candidates, if not the establishment’s, may well have been the Left’s Jean-Luc Mélenchon and, for the right, Marine Le Pen.

The Establishment in Spain, a descendent of the Franco era, is doggedly keeping the notoriously corrupt Prime Minister Mariano Rajoy in power by management of the arithmetic in the assembly. Even so Pablo Iglesias of the Podemos, (Communist) has been holding his own.

Syriza or Communist party, which had come to power in Greece, was badgered into compliance by Germany and EU on issues like austerity, exactly the policies the party had opposed to come to power. So it will someday be replaced by its rightist counterpart in the coming elections.

The point I am making is this: the Gauri Lankesh murder has not taken place in an atmosphere of total helplessness for folks who have their heart in the right place. The pre-2008 drab, Right Wing uniformity is under challenge. A new, non-doctrinaire, Left is on the ascendant in many places. Eruptions taking place elsewhere will, in the medium to long run impact on India. The traditional Left in India is, of course, on the retreat but the ideology responsible for Gauri’s murder will remain under challenge by regional forces in Bihar, West Bengal, Tamil Nadu, Kerala, Karnataka etcetera.

The BJP’s defeat at the hands of AAP in Delhi, Ahmad Patel’s victory in Gujarat, an unprecedentedly massive rally in Bihar, the embarrassment on demonetization, are clearly not making the rulers smell of roses. Slowly coming into focus, is a real question mark on the longevity of the structure which evidently shelters killers of Govind Pansare, Narendra Dabholkar, M.M. Kalburgi and Gauri Lankesh.