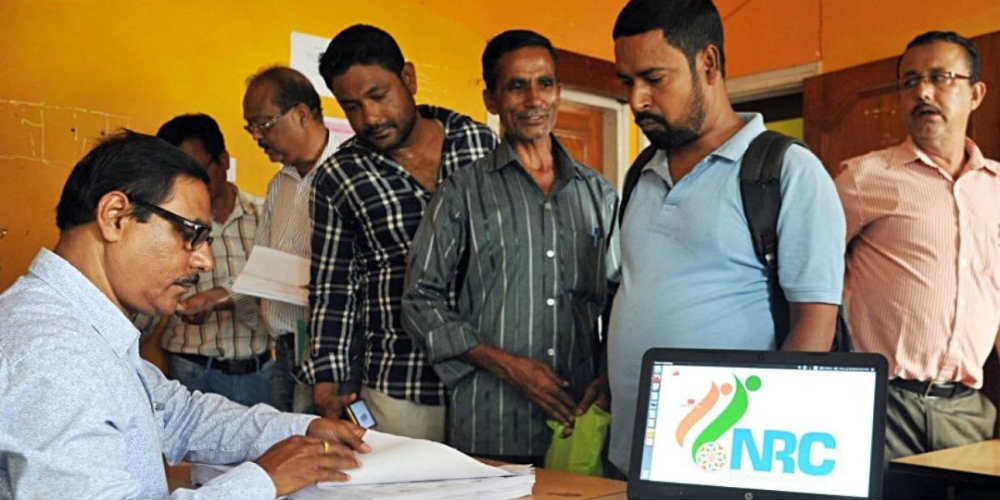 Call it coincidence or mysterious design, there are moments in world affairs when disparate societies have the same experience.

I had barely registered that the sword of Damocles hung on the heads of over four million people, mostly Muslims, in Assam by a very Orwellian sounding National Register of Citizens, when a friend from New York drew my attention to similar happenings in Israel.

In Assam, the terrified Muslims have apparently failed to provide documentary proof of citizenship. The BJP governments at the centre and the state have been at pains to reassure Muslims staring at the abyss that they will have a chance to appeal what is for the time being only a provisional finding of the NRC. In any case whatever is happening is at the Supreme Court’s prodding.

Meanwhile, far removed from Assam, on July 19, Prime Minister Narendra Modi’s kindred spirit, Israeli Prime Minister, Benjamin Netanyahu, pushed a boulder into the pond: he called it “a pivotal moment in the history of Zionism and the Jewish state.” The Knesset (Parliament) had passed a law which says: “The right of national self determination is unique to the Jewish people.” Israel’s non Jewish population have been left out. Assam’s Muslims, you are not alone.

I wish someone in the opposition galaxy would lambast the NRC half as effectively as Hanan Ashrawi of the PLO did the Israeli “perfidy”. The Jewish Nation State law, she said, is “apartheid, discrimination, ethnic cleansing and sectarianism at the expense of the Palestinian people”.

The way Donald Trump is distributing largesse to both, Netanyahu and Modi (shifting the embassy to Jerusalem and promising NATO status to India) he qualifies as their “big daddy” for more reasons than one. He set very high standards on how to treat the “others” when they try to violate national borders. He separated children from their parents. Children were sent to foster homes and parents to jail.

Netanyahu’s dilemma is as old as Israel: is it a democracy or a Jewish state? The new law would tend to tilt the balance one way. Of all the American Presidents, Jimmy Carter was the only one to place his finger on the pulse: “Palestine: Peace Not Apartheid”.

In the past, New Delhi always had two distinct approaches to Israel. There was a tweed-wearing, liberal, socialist disdain for Zionism opposed to a much more powerful “Hindu” empathy for the Jewish state which, like India, was surrounded by hostile Muslim neighbours.

Matteo Salvini, of the xenophobic League Party, a self confessed admirer of Mussolini, Deputy Prime Minister but in effect the driving force behind the coalition in Rome, must be swooning in ecstasy. He must feel reassured that he has kindred spirits in very high places.

His ties to Le Pen once raised the hackles of Jewish leaders like Riccardo Pacifici for anti Semitic potential of the two. After all, Le Pen’s father, Jean-Marie Le Pen was a holocaust denier. Salvini clarifies that he hates Muslims, not Jews. That is salutary.

I doubt if friends in Israel would be overtly impressed by a Mussolini admirer denying his anti Semitic instincts. Indeed, there is growing anxiety that wherever across the globe the raging anti establishment wave has taken a turn to the far right, anti Semitism has followed.

The People’s Party in Austria, a very fascist outfit, under 31 year old chancellor, Sebastian Kurz, has, as expected, revealed itself as virulently anti Semitic. There are moves afoot to have Jews buying kosher meat to be placed on a separate registry. The most shrill voice supporting the move had been of Gottfried Waldhausl, former animal welfare minister. “Soon you will ask us to wear the Star of David on our chests” said a spokesman for the Jews.

In Austria has surfaced the perfect example of enemies joining hands in the face of common danger: Jewish and Muslim organization have made common cause because “halal” meat too has come under fire.

Spokesman of the American Jewish Committee’s Berlin office, has denounced attacks on “halal” meat for Muslims. “These are attacks on Jewish and Muslim ways of life.”

Global media, like the ostrich, has buried its head in the sand in the hope that a gust of anti Semitism will pass even from a country like Poland where Auschwitz was supposed to be a constant reminder – “never again”. But what is happening is quite the contrary and scary. A law has been passed prohibiting Jews from reclaiming properties they lost during the holocaust.

Trump has rushed in with an act called “Justice for Uncompensated Survivors Today”. In brief it is called the Just Act. It requires the State Department to monitor the activities of a dozen or so countries where anti Semitism stands in the way of Jewish access to property lost during World War II. US President as a realtor is a brand new concept.

The potential of explosive nationalism (say, in Poland) being stoked by this kind of foreign intervention has apparently been lost on the authors. The image of Trump as a backyard bully will only grow as will anti Semitism.

There is a profound lesson for a society like Israel in all of this. There is a potential for fascism, anti Semitism, when anti status quo movements take a sharp right turn. No such fear lurks when the Podemos rises in Spain, Syriza in Greece or when a 28 year old Leftist bartender in New York, Alexandria Ocasio-Cortez beats a 10 term Democratic Law maker, or when Lopez Obrador knocks the stuffing out of the Right in Mexico. There are examples galore. Neither Jews nor Gentiles are invoked when movements talk of distributive justice and inequality.