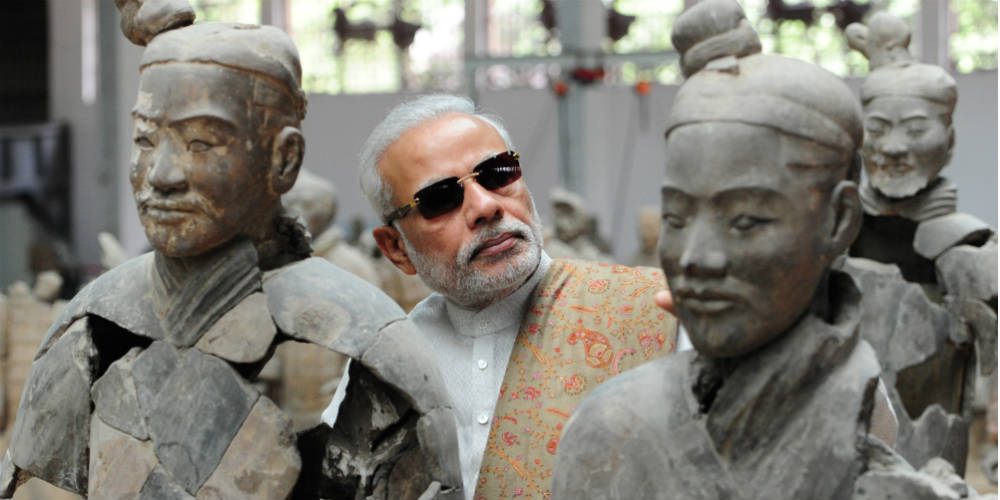 The recent statement by a Chinese expert that if India has the right to interfere on behalf of Bhutan in the Chumbi Valley, China accordingly has the right to interfere in Kashmir on behalf of Pakistan — is reflection of the Chinese mindset which is ‘One Belt One Road’ (OBOR) obsessed. By drawing this parallel China seeks to legitimize its illegal presence in Pakistan Occupied Kashmir (Gilgit-Baltistan).

The strategic importance of Chumbi Valley has been by now underscored and reiterated in a plethora of articles. The purpose of this article however is to sensitize the readers about the larger objective of China in effecting a thrust from Chumbi Valley into Bay of Bengal through Indian territory and the land of Bangladesh in fanatical pursuance of ‘One Belt One Road’ initiative.

This OBOR thrust has both the land and maritime component. All other strategic interests that may accrue to China as a consequence are subordinate to the OBOR.

China is deliberately trying to create ambivalence with regard to the Chumbi Valley by manipulation of history and diplomacy. In this regard, the Valley’s tri-junction status between India, Tibet (China), and Bhutan, and the colonial history of Sikkim and Bhutan in its interface with Tibet (China), is coming handy to the Chinese for the infrastructural (road) aggression. 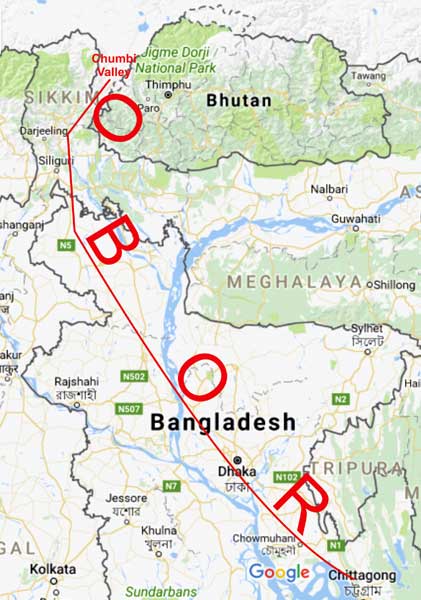 The Chinese have purposely kept the border dispute with Bhutan in the Chumbi Valley unresolved, and now it is taking strategic advantage of it. Cleverly, it is trying to circumscribe India by insisting that the territory through which the road is envisaged is a bilateral matter between China and Bhutan.

Such manipulation of history and cartography is intrinsic to China’s strategic posturing. The most blatant display of this posturing has been in South China Sea.

At the geopolitical level, the Chinese aggressive posture in Chumbi Valley and the South China Sea are interlinked. 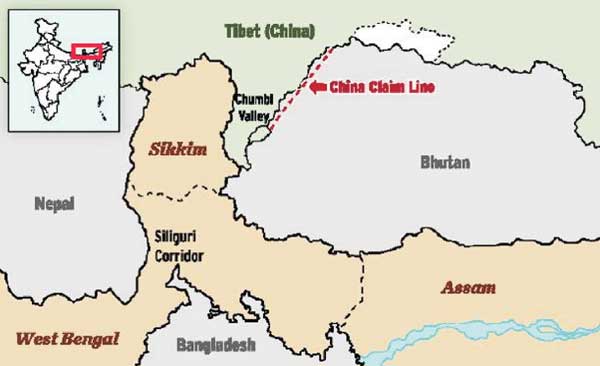 The vicissitudes of geopolitics in the Indian Sub-Continent and the Asia Pacific Region has engendered the strategic alignment of US, India and Japan, besides other powers like Vietnam, South Korea, and Taiwan. The China-Pakistan Economic Corridor (CPEC) and the consequent thrust of China into the Gulf Region by way of Gwardar Port has accentuated this alignment. It is also a geopolitical truism that to check or stalemate China’s aggressive designs, India is the only country that can be counted upon in the Asian Region, and at the global level the only power is the United States. It is this reality that impelled the US to reconfigure its commands and designate the Indian Ocean and the Pacific Ocean as one entity ‘Indo-Pacific Region’. Accordingly, the US has moved 60 percent of its global war assets into the Asia Pacific region.

Concomitant with the Chinese aggressive posture in the Chumbi Valley, there has been intense naval activity by Chinese warships in the Indian Ocean. In the last two months, the presence of more than a dozen warships has been reported. Significantly, this includes submarines, submarine support vessel (Chongmingdao) and an intelligence gathering vessel (Haiwingxingu). It will be fair to assess that the Intelligence Gathering Vessel has been deployed to monitor the ongoing Malabar Naval Exercise (July 10–17, 2017), wherein 20 warships of US, India and Japan will participate. The most demonstrative muscle of the exercise is in form of US Aircraft Carrier – Nimitz, Indian Aircraft Carrier – INS Vikramaditya, and the Japanese Izumo Class Aircraft Carrier.

It may be mentioned that under the ruse of ‘anti-piracy operations’, Chinese naval presence in the Indian Ocean has been burgeoning. China has already rooted itself in the Indian Ocean by way of a base in Djibouti in the Gulf of Aden. At any given time, the Chinese have four to five ships deployed, which are periodically replaced, thus providing China the ruse to make larger forays in the IOR.

With regard to the Chumbi Valley, apart from the OBOR, the consequential strategic aspirations of China are no less threatening. It has the potential to outflank Sikkim, severe India’s Northeast through Siliguri Corridor and discredit India’s efficacy and capacity in standing up for its close regional allies. If India makes a climb-down it will be yet another historical blow. The 1962 war dealt a serious blow to the image of India in its neighbourhood. Countries like Nepal, downgraded their security and military relationships with India. Prior to the 1962 War, King Mahendra throughout maintained a neutral position during the border dispute between India and China. Post India’s defeat in the war, he opportunistically chose that very moment to seek and secure a number of concessions which India would not have acceded to in less vulnerable times. He secured India’s acquiescence on the construction of Kodari-Kathmandu road by China.

Pakistan went a step further and attacked India in 1965. Nevertheless, Bhutan was one country, which stood steadfastly with India because the annexation of Tibet, and later the cultural revolution had unnerved the religious and cultural sensibilities of people of Bhutan. Given Bhutan’s unique Himalayan geostrategic location, its geopolitical imperative weighed solely on India for its security. Nations, which have inadequate power vis-à-vis their opponents, are impelled to forge alliances to make-up for the deficit. At this juncture, when China is trying to muscle its road through the Bhutanese territory in the Chumbi Valley, India is obligated to fulfill the security deficit of Bhutan vis-à-vis China. If we are found remiss, it will be a disastrous blow, globally and more perniciously in the neighborhood, to our status as one of the fastest rising power.

China’s strategic design is both ambitious and audacious. To the Chinese, the Chumbi Valley is one initial start-up dare in the extension of OBOR to the Bay of Bengal. The second daring proposition would be to pierce through the narrow Siliguri Corridor. Finally, the Chinese reckon that Bangladesh will not much demur to the strategic thrust.

When China has embarked on such an ambitious strategic project, with Xi Jinping investing so much personal prestige into it, it will be naïve to ignore the covert machinations by the Chinese in consonance with military muscle flexing in Chumbi Valley. This author has gathered that amongst the covert leverages that China has activated are some Gurkha activists and high level political functionaries in Sikkim and Darjeeling region to facilitate the OBOR thrust in the Siliguri Corridor. The recent upheaval in Darjeeling has strong external dimension. Further, a certain Chinese diplomat in Delhi has used every method under the sun to wean away the Bhutanese dispensation in favour of OBOR, only to be spurned.

For some years now, China has been making fierce bid to establish itself on the coast of Bangladesh and consequently Bay of Bengal. It has been putting sustained, rather smothering pressure on Bangladesh to secure contract for building deep water port in that country. It may be known that Chittagong port, the major port of Bangladesh has a maximum draft of only of 9.2 meters and therefore cannot accommodate large container ships which necessitate a draft of 15 meters. The transshipment of load entails a financial burden of $15000 per day. In 2010 China was set to invest $9 billion to upgrade Chittagong port. This port enjoyed great prominence in Maritime Silk Route.

Acquisition of foothold and access to port facilities in Bangladesh would also provide maritime linkage to the Yunnan province of China. There is already a gas pipeline running from Sittwe on western coast of Myanmar to Yunnan.

The Chinese maritime machinations in Bangladesh not only alarmed India but other powers as well. The growing presence of China in the Indian Ocean stirs the deep strategic and security sensitivities of US and Japan. India, US and Japan have been making every possible effort, overt and covert, to thwart China from gaining foothold. China on the other hand refuses to be deterred. Thwarted in Chittagong, it made yet another aggressive bid to construct a deep sea port in Sonadia, an island near Cox’s Bazar. It was nearly confirmed that Sheikh Hasina, during her visit to Chinain 2014 was to sign an agreement in this regard, but the opposing pressures from India and US scored over the Chinese. Japan too has evinced maritime interest in Bay of Bengal, in that, it had carried out a survey of Sonadia in 2009 and declared the feasibility of a deep water port.

The US too has been pushing desperately for development and acquisition of deep water port in Bangladesh, for critical strategic imperatives as well as to keep China at bay.

Meanwhile in November 2016, Bangladesh took delivery of two Type-035 diesel electric Ming-class submarine at a cost of $203 million from China. This acquisition will entail establishment of repair and maintenance facilities, supervised by the Chinese. It is in a way extending the Chinese maritime influence in the Bay of Bengal part of the Indian Ocean. Chinese naval activity in the Indian Ocean is already intense in countries like Sri Lanka and Pakistan. It may be mentioned that since 2004, 78 percent of Bangladesh defence purchases has been from China. In October 2016, Xi Jinping became the first Chinese President in 30 years to visit Bangladesh.

In the maritime domain of Bangladesh, whose criticality is not only Indian but global, the contest that we are witnessing is not only fierce but murderous. All contenders are creating and using every conceivable leverage to disrupt one another. The leverages include top political functionaries in Bangladesh and West Bengal government. Intimidation, destabilization and disruption is being carried out through such leverages. In this strategic duel the US has not been found averse to the use of jihadi organizations in contiguous parts of Bangladesh and West Bengal, just as China in single-minded and unyielding pursuit of OBOR is using Gorkha land activists to destabilize the region.

The premium, rather strategic desperation of China for inroads into the Chumbi Valley can be gauged from the offer it made to Bhutan, which in terms of size of territory, can be considered as extremely magnanimous territorial bargain that involved forgoing Chinese claim of 495 sq km land in Pasamlung and Jarkalung valley in Bhutan’s north-central sector in return to 296 sq km in Doklam.

Let not the Chumbi dagger impale through the Siliguri Corridor, as it would severe India’s northeast, including Arunachal Pradesh. This would also allow surrendering to the Chinese proclivity of bargaining one piece of territory with the other. In such a doomsday scenario, the main bargaining chip could be Arunachal Pradesh. Moreover, any penetration by China will pose a dilemma in using fire-power, aerial or otherwise, in inhabited areas of India by Indian Armed Forces.

The Chinese intentions in Chumbi Valley therefore are not only a question of boundary but pose an existential crisis to India.

2 thoughts on “Is the Doklam standoff India’s Cuban crisis moment?”