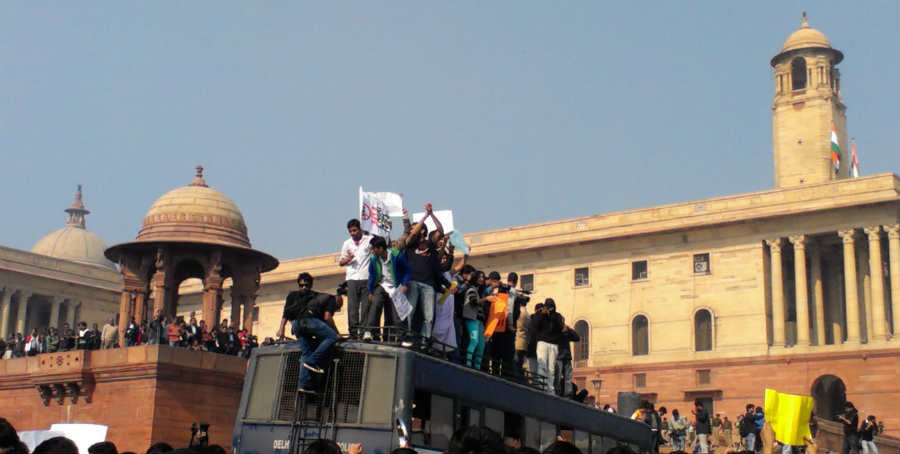 Two state visits to India on respective Decembers of 2012 and 2014 by the Russian President Vladimir Putin, both clouded by incidents of ‘rape’ in the Capital ,smack of more than circumstantial and coincidental links. Between them runs a common thread through pattern, personalities, and possible patrons involved.

The ‘Nirbhaya case’ continues to smite the conscience of all conscientious Indians. Even now, even as one inadvertently conjures the incident, the feeling of incense and devastation is inescapable. The criminal lust and bestiality of the perpetrators is rather abominable, a shocking reminder about the level of decadence of the society in urban India, particularly some metros. The incident reflected how consumerism has reduced human beings to mere machines of unbridled desire and consumption.

The incident shook the collective conscience of India. It aroused guilt, empathy, sympathy, helplessness and anger amongst all classes. Politicians, bureaucrats, other government servants, professionals and of course the media joined ranks in their outpour of grief, support and sympathy. The sense of anger and frustration had impelled the police to identify and nab the culprits within 24 hours. A special committee was constituted under one of the most astute and revered legal luminary Justice JS Verma to recommend changes in the criminal laws with regard to rape, which would serve as an effective deterrent. This was on 22-December-2012. Such was the pitch of the mood of the nation that he was asked to deliver the recommendations within 30 days. Based on his recommendations, a stringent anti-rape law was promulgated.

The entire movement in the wake of the ‘Nirbhaya case’ was pensive and introspective. It is at this juncture that some anti-social elements particularly owing allegiance to the ultra-leftists hijacked the movement. They were indeed subverted and their violent agenda was being dictated by external quarters. In an act, which must have further tormented Nirbhaya’s soul, these protestors abandoned the sobriety of the protest and rushed menacingly towards Rashtrapati Bhawan, but were stopped on the edge of North Block and South Block. This was unprecedented in independent India. No movement had dared to attempt to capture the nerve-center of governance of India. The person who later came closest in doing so was Arvind Kejriwal on the eve of Republic Day in 2014. To that extent, and given his links to agencies inimical to India, he is clearly a threat to the nation in an expedient political garb. He and his goons too had tried to hijack the Nirbhaya movement and give it a violent political colour.

How and when they were facilitated to come to a pernicious distance of the ’nerve centre’ is a matter that must be investigated by this new government. Surprisingly, no such anger was demonstrated by the same so called angry-demonstrators, when the Courts declared the beast, who slaughtered the body and soul of Nirbhaya as ‘juvenile’. Was it for political reasons and in deference to his religious extraction?

It now emerges that the intention of these violent and menacing protestors had nothing to do with Nirbhaya movement but to sabotage Putin’s visit at the behest of Russia’s rival powers. This happened when Putin was on a ‘state visit’ to India. The prevailing security situation arising out of the protests was bandied as the reason for shift of venue for the meeting between Manmohan Singh and President Putin from Hyderabad House to 7, Race Course Road, the official residence of the prime minister. This was a diplomatic insult to any head of state.

Would such protests be allowed at the sensitive tri-junction (North Block, South Block and Rashtrapati Bhawan) a day before the US President Barack Obama’s visit to India? Would the Indian authorities have dared to change the venue of meeting between Obama and Manmohan Singh? Past precedence shows that the overall security prior the US President’s visit is taken over by the US security establishment. The area is sanitized and secured some days in advance of the visit. This drill was scrupulously adhered to even during the most recent visit of President Obama during the Republic Day Celebrations.

Who on 24-December-2012, therefore prodded the protestors to shift their venue from India Gate to the symbolic nerve center of India’s sovereignty? It may also be mentioned that during the same period the anti-Russian sub-text in the People’s Movement Against Nuclear Energy (PMANE) was glaring. The convener of PAMANE, Mr Uday Kumar not only questioned the quality of nuclear reactor but also castigated Russia for duping India in $ 1 billion deal for upgrade of 63 Mig 29 aircraft and the delay in delivery aircraft carrier Admiral Gorshkov entailing doubling of the cost i.e. from $ 1 billion to $ 2.3 billion. He and his supporters greeted President Putin’s 24 Dec visit with ‘Putin Go Back’ slogans. Was there a rival foreign power trying to disrupt or disparage President Putin’s visit? Was a part of the Indian establishment, complicit? Were the then PM and his benefactor beholden to two different international camps? Was ‘rape’ being used as a vector for ulterior strategic motives? The latest developments strongly indicate in that direction.

Readers may fast-forward events to two years later. Mr. Putin again visited India in the second week of December 2014. Coinciding this visit, there was another incident of alleged ‘rape’. Reportedly, the victim was in the forefront of the ‘Nirbhaya agitation’ in the ‘nerve centre’ in 2012. This unsuspecting and hapless girl would have hardly imagined that she could fall victim of the machinations of external powers even if it meant ‘rape’. There was again an attempt by ultra-leftists to use the incident to galvanize the people for the same kind of the protest and at the same sensitive venue. The new government however foiled their bid.

The perpetrator was one ‘Shiv Kumar Yadav’ with a history of rapes. This habitual rapist was serving with the Uber taxi service, a US based company. Ironically, the company prides in selecting drivers after layers and layers of checks and counter-checks. Why it failed to do so in this case is intriguing.

Following the rape incident, the Uber Taxi Service was banned in India. The suspicion of involvement of an external power or agency is palpable. What this author then could not reconcile was that how can the suspected ‘power’ use one of its own companies to ends which can cause self-inflicted financial damage. The Uber Taxi Service is a $ 40 billion enterprise and operates in and around 250 cities the world.

Now, as per latest inputs, it emerges that the said external quarters have been able to convince the rape victim to file a case not in India but in a San Francisco Court in the US on the specious plea that the policies that contributed to the rape emanated from California.

People with different criminal proclivities are indeed identified by Intelligence agencies and used for fomenting terror, discontent and destabilization in target populations and countries. Shiv Kumar Yadav it seems was identified as one such element, Ram Singh the mastermind in Nirbhaya’s case was another. Will Shiv Kumar Yadav also be eliminated as Ram Singh? Will he also be declared a case of ‘suicidal death’?

(RSN Singh is a former military intelligence officer who later served in the Research & Analysis Wing. The author of two books: Asian Strategic and Military Perspective andMilitary Factor in Pakistan, he is also a Guest Blogger with Canary Trap. The opinions expressed by the author and those providing comments are theirs alone, and do not reflect the opinions of Canary Trap or any employee thereof)

One thought on “Is rape being leveraged by external players?”