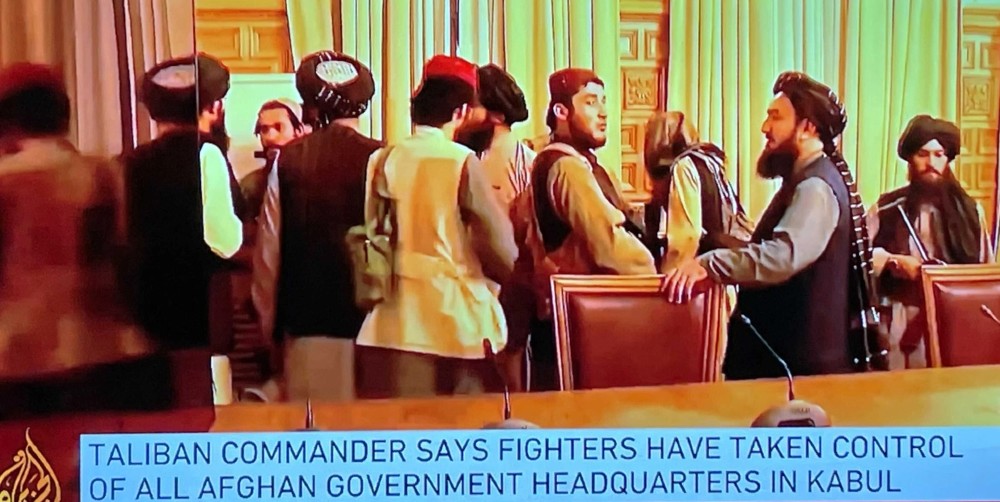 Three phone calls from Doha on August 15, 2021, between 9 am and 10 am led to the collapse of President Ashraf Ghani’s government in Afghanistan.

Mohammed Masoom Stanekzai, head of Afghanistan’s peace negotiating team in Doha, Qatar (former chief of the National Directorate of Security) called Hamdullah Mohib, Afghanistan’s National Security Advisor that he had “received instructions to hand over Arg to the Taliban”. The Arg is Afghanistan’s Presidential Palace compound in Kabul and the country’s seat of power. Mohib was asked to prepare a list of evacuees from Arg. Eventually, the list had 52 names. Almost all of them (90%) on the list of evacuees were Pashtuns. Except for some loyalists, like the former First Lady, Mrs Rula Ghani’s NDS bodyguard, who is a Hazara.

Shortly, after 10 am, Mohib, in turn, called Dr. Fazel Mahmood Fazly, former President Ashraf Ghani’s Chief of Staff. “Tell all the staff at Arg to go home.” The instruction was clear, except for a handful of administrative staff, everyone was told to leave their workstations and head home. The author has verified this with multiple employees at the Arg, including those who worked in the communications and media team of Ghani. One of the staff members who worked at the Archive Office said “a few members of NDS walked into our offices and asked us to leave urgently. Everyone panicked and just rushed out with their office bags. I left with my papers lying around on my desk.”

The next person on Masoom Stanekzai’s speed dial was the Head of Presidential Protection Service, Muhammadullah Amin. He was told to ensure that President Ghani was safely evacuated in a helicopter with his wife and close aides to the Kabul International Airport. The evacuation window was set for between 1 pm and 4 pm on August 15th.

Finally, Masoom Stanekzai called up President Ashraf Ghani. “You must leave. The Taliban has decided to kill you. They have changed their mind on the peaceful power transfer to a transition government. They will take over the government.” Ghani refused to vacate his office or leave the Presidential compound. However, he had already indicated a day earlier and during the emergency meetings on August 15th morning that he was willing to relinquish power to a transition government. He was confident that his pro-Pashtun stance in the recent years would be looked at favourably by the Taliban.

Till late night on August 14th, there were a flurry of phone calls between Doha and the Arg. None of them were about saving Afghanistan or fighting Taliban forces stationed on the outskirts of Kabul. These calls were all about differentiating political messaging from the strategic/military intent. The twin political messaging for the domestic and international audience emphasised Ghani’s readiness to work out peaceful transition to a unity government which included Taliban leaders and “avoiding bloodshed”. The strategic and military intent was of staging a palace coup.

Ghani and his two chief advisers, Hamdullah Mohib (NSA) and Fazal Mahmood Fazly (Chief of Staff) were derided in the Arg as the ‘three-man republic’. It is not clear if Ghani was an active participant of the palace coup or if he understood what was happening.

In the days leading up to August 15th Mohib informed all informed all the diplomatic missions that there is no need to worry. Meanwhile, Ghani, consistently maintained that “Kabul will be protected by ANDSF (Afghanistan National Défense and Security Forces) and our international partners.” The US Secretary of State, Antony Blinken recalled in an interview to CBS on August 22 that a day before Kabul was taken over by the Taliban he was on the phone with Ghani “when he was telling me his intent, as he put it, to fight to the death. Well, the next day, he was gone.”

Insiders in the Arg now reveal that Ghani was an ethnocentric Pashtun nationalist. “He is a fascist, an Afghan chauvinist who secretly harboured the view that political power should always remain with the Pashtuns” an Arg insider who worked as one of Ghani’s aides for 3 three years and is now residing in a Western country told this author. Ghani relied completely on two inexperienced Pashtuns – Mohib and Fazly.

The peace plan accompanying the political messaging that Masoom, Mohib and Fazly worked out was never intended to be implemented. Everyone knew that the Taliban would lay siege to Kabul and build the pressure for the President to resign. The plan entailed that Ghani would step down, hand over power to a transitional Government with a power sharing arrangement with the Taliban. This would give international legitimacy to the Taliban, and it would be promoted as a genuine Afghan solution.

Mohib was running with the hare and hunting with the hound. From middle of July till August 14th, Mohib in his meetings and calls with the diplomatic corps in Kabul and in interviews to the international media would give “excuses to explain the inability of ANDSF to halt the Taliban advance and at the same time underline that ANDSF would eventually prevail.” Even as he conveyed the Afghan Government’s resolute determination to the diplomatic corps in Kabul to overcome the Taliban challenge, Mohib was coordinating a controlled surrender of all the 34 provinces to the Taliban.

Afghanistan’s Defence Minister, Bismillah Khan Mohammedi, who is now in Panjshir Valley heading the Afghan resistance forces said angrily, referring to Ghani and his team of advisors, “they tied our hands behind our backs and sold the homeland, damn the rich man and his gang.” Between August 6th and August 14th, Mohib strategically enabled the Taliban to rapidly advance by withdrawing the ANDSF and preventing them from actively engaging the Taliban.

By August 13th, five of the seven Afghan Army Corps had surrendered meekly – 203rd in Gardez, 205th in Herat, 207th in Kandahar, 2015th in Helmand & 217th in Kunduz. On August 14th, the remaining two army corps – 201st in Babul, and the 209th Corps in Mazar-i-Sharif surrendered. On August 15th, 111th Division of ANDSF exclusively raised for the security of Kabul melted away.

The Taliban just walked into Kabul and took over Afghanistan in a pre-arranged palace coup.

Part 2 will focus in some detail on the events that happened on August 14th and 15th and who engineered the palace coup.

(VK Shashikumar has extensively reported from Afghanistan. In February/March 2000 he undertook a risky mission, travelling to Panjshir valley to interview the iconic Northern Alliance Commander Ahmad Shah Massoud and his deputy General Bismillah Khan Mohammedi, who was the Defence Minister of Afghanistan till the Government collapsed. Now General Bismillah is the head of the resistance forces in Afghanistan)

Watch below VK Shashikumar’s interview, 20 years ago, of Ahmad Shah Massoud, Commander of Northern Alliance, which fought the resistance war against the Taliban. Now his son, Ahmad Massoud, is taking on the role of the resistance leader and honouring the legacy of his father.

4 thoughts on “The Great Afghan Betrayal: A Palace Coup? – Part 1”