There is evidence to indicate that the move to supersede Lt General Praveen Bakshi, the senior most Army commander who was seen as the natural contender for the post of Army Chief after the retirement of General Dalbir Singh Suhag, started some months ago, with negative stories about the officer being planted through anonymous letters. Four anonymous letters were floated with vague allegations against Bakshi by “men in shadows”, who succeeded in getting a probe ordered into the charges. Nothing emerged from the investigation. But the fact that an investigation was ordered, was used against him for sidelining Lt Gen Bakshi. Eventually, Lt Gen Bipin Rawat was made the Indian Army Chief.

Even Kautilya, the acknowledged master who laid down the guiding principles of statecraft during the era of Chandragupta Maurya, would have been befuddled with what has been happening since the days of the UPA to the Indian state and its relationship with its own armed forces today. The naming of Lt General Bipin Rawat as the next Chief of Army Staff defies convention. The decision, which meant superseding two serving Army Commanders, now is certain to change the very outlook of senior commanders in the armed forces in the future.

From ancient times — going back to the Ramayana and the Mahabharata — the epics assert that “a king’s roots are his treasury and his army”. A careful examination of the Mahabharata in particular, when shorn of its myth and poetic fancy, allows us to glean the foundation on which later Indian military theory and practice evolved. In the beginning, the Army was one of the two prakritis (essential elements), but as time went on, more and more elements were added on and the Army sank lower and lower down in the order of importance.

Nevertheless, despite having senapranetras (later known as senapatis), kings retained their supremacy in matters of defence, being the final and ultimate authority when it came to taking decisions. In his superb book, ‘A Military History of Ancient India’, Major General G.S. Sandhu writes: “The king, and the other princes, received their early training in niti (politics) and dhanurveda (military science); they were imparted training in both the theoretical and practical aspects of warfare. They were also given intensive training until they gained proficiency in the use of weapons.”

Today, monarchies are long gone, and the people are governed by the state where power is centred in the hands of elected representatives. However, the fact of the matter is that with the reins of power in their hands, the elected head of a democratic government is in a way a modern-day monarch. The main difference from the days of yore, however, is that our decision making officialdom of today know little about armies and what makes soldiers tick, to say nothing of the use of weapons, their deployment, and their use. Since the early 1950s, ever since the political-bureaucratic began to exercise power in Independent India, most of them and those in their immediate vicinity have had little exposure to the armed forces.

The writing was on the wall for Lieutenant General Praveen Bakshi three to four months ago when an unseen “dirty tricks department” suddenly became hyperactive. Until then, Lt Gen Praveen Bakshi, the Eastern Army Commander, being the senior most among those who had the residual service to make the grade, was seen as the natural contender for the top job when the present COAS would hang up his boots. An Armoured Corps officer, Bakshi had an outstanding record of service, and among the rank and file, the reputation of being a no-nonsense dyed-in-the-wool soldier, who would, it was hoped, ensure self-respect in the armed forces.

Four anonymous letters were floated with vague allegations against Bakshi. The “men in the shadows” succeeded in getting a probe ordered into the charges. 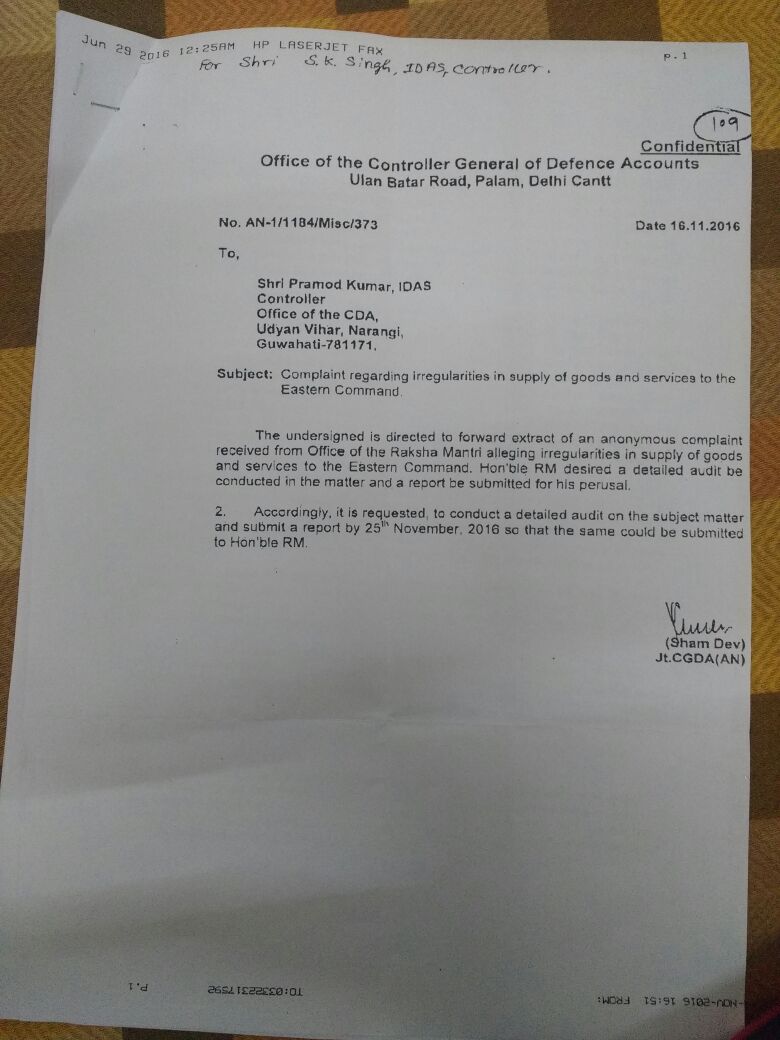 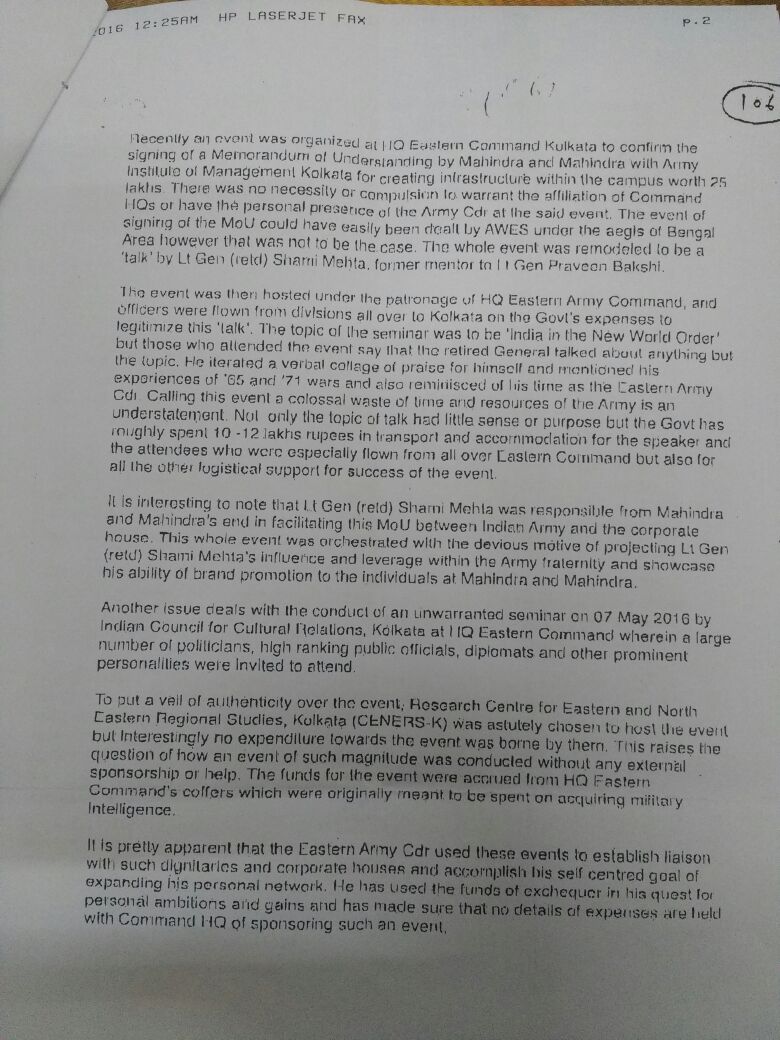 Interestingly, through his four-year tenure first as Eastern Army Commander and then the COAS, the present incumbent, General Dalbir Singh Suhag had ensured that only his handpicked officers had replaced him as the Corps Commander in Dimapur, Nagaland. It may be remembered that General Suhag had been the 3 Corps Commander for some time and is conversant with that area and its special characteristics. It may also be recalled that it was during this period that he had a DV-ban slapped on him by General V K Singh in connection with the Jorhat raid that was reversed by his successor, General Bikram Singh, the moment he took over. Meanwhile, Bakshi’s squeaky-clean image could not be dented and the agencies apparently reported back saying they had nothing to build a case on.

To make matters tricky for the “shadow men”, the Defence Minister, Manohar Parrikar, initially decided to stick to the existing norms of seniority and suggested Bakshi’s name to the Prime Minister’s Office. Suddenly, out of the blue, anonymous missives appeared, ghost written by the “men in shadows”. The government thereupon went in for a relook.

Coming to General Suhag, throughout his tenure as the Army Chief, he has surrounded himself with Gorkha Regimental officers. Various key appointments have been lying vacant for months altogether, as was the case with the Indian Military Academy in Dehradun. The outgoing Army Chief is very close to the National Security Adviser. In the aftermath of the Monand Chandel incidents in May and June 2016, where eight Assam Rifles men and then 22 men from the Dogra Regiment were killed, the NSA had himself supervised the nationally acclaimed retaliatory raid that the then DGMI said took place within Myanmar.

With some sections of the government reportedly keen on picking Lt Gen Bipin Rawat for the job, there was a meeting of common interest between them and the COAS, who too had a high opinion of Rawat, who had been one of his chosen few to command 3 Corps. However, to appoint Rawat, the Ministry of Defence had to go over the head of not just Praveen Bakshi, but also Lt Gen P.M. Hariz, who was the Southern Army Commander in Pune. This, it was then claimed, was done “in national interest”.

In the immediate aftermath of the announcement, the government informally justified Lt General Rawat’s promotion on the grounds that as an infantry officer he had greater experience in handling counter insurgency scenarios. However, this failed to impress critics who pointed out that Bakshi had earlier commanded 9 Corps and served as Chief of Staff, Northern Command, apart from which he also handled Eastern Command, which was as deeply involved with CI Ops as Northern Command. The same could also be said for Lt Gen Hariz, who, like Bakshi, has had a blemish-less record of service and enjoys a first class reputation amongst his peers and his men. On social media and across forums, there was a divide as the Army split into two—those for and those against, mainly on grounds of their service arm.

According to the same ancient texts that hold forth on the role of senapatis and kings, the role of the soldier is clearly defined, stating “The gods send calamities unto those who forsake their comrades in battle and return home with unwounded limbs”.

Led by an able administrator, Prime Minister Narendra Modi, the government needs to ensure that the “shadow men” are not allowed to prevail with their choices of who will eventually hold the reins of the Army. By manipulating the system for reasons best known to themselves, the “shadow men” may well have prevailed with their choice of who will eventually hold the reins of the Army, but they have also driven a wedge into a system where men at the very top may forsake their comrades in peacetime. For soldiers do not only fight with courage and valour for country and flag, they fight mainly for the man on their left and the man on their right and at the end of the day, they expect fair play from those at the top. It is imperative that the need of the hour is to dispel the influence of these “men in shadows” and their modus operandi of anonymous complaints, which should be treated with the contempt they deserve. It is now up to Prime Minister Modi, whose destiny it is to preside over the various prakritis that hold this country together to ensure that the Army is kept away from these underhand tactics and each soldier is given the respect and honour due to him or her.

(This piece was first published on Sunday Guardian website. Canary Trap has republished it with the permission of the author Shiv Kunal Verma. Shiv Kunal Verma is the author of the books ‘The Long Road to Siachen: The Question Why’ and ‘1962: The War That Wasn’t’. The latter, hailed by critics to be the most definitive account of the Sino-Indo conflict, examines in detail the role of the then Prime Minister, Jawaharlal Nehru, in tampering with the Army’s hierarchy, which directly led to the debacle against China. The opinions expressed by the author and those providing comments are theirs alone, and do not reflect the opinions of Canary Trap or any employee thereof)