I watched an interesting movie the other day on one of the English movie channels. The movie, Traitor, broadly shows how important it is to infiltrate terror organizations in order to get actionable intelligence about impending terror strikes. The reason I started the post by mentioning the movie is the pathetic state of intelligence gathering in our country.

After every terror strike, almost all the agencies (including the netas) involved in internal security would try to save their skin by claiming to have issued intelligence alerts and warnings (many of which are given by foreign intelligence agencies). An alert/warning is a general information about an impending attack, with no specific information on the target, planner, timings, and motive. For getting this info, an agency need an informer inside the terror organizations whose sole aim is to destabilize India.

Ground level intelligence, apart from electronic intelligence, gathering has become so challenging in the current scenario where various terror cells are operating independently of each other. So even if you penetrate one, the other cell can still carry out another strike without being bothered.

Maloy Krishna Dhar, a former senior IB official, has explained the terror matrix. According to him, “The network is complicated, often interconnected and often separated by invisible walls of tanzeem incompatibility. It may be noted that different tanzeems normally do not collaborate with each other and very often the selection of the tanzeems and personnel in India are done by the ISI and the DGFI.”

Initially, the Pakistan-based terror organizations had to send people from across the border to create mayhem in India but now they have a huge pool of Indian jihadis to choose from. Our opportunistic and short-sighted politicians have always attempted (to protect their vote-banks) to hide the fact that there has always been local involvement in terror strikes across India (even in the 26/11 Mumbai attack). Everytime there is a blast, the security agencies are ready with a statement that Pak-based terror groups are involved in the attack but nobody highlights the fact that there is an active local involvement and that they have miserably failed to investigate that.

According to security experts, Pakistan-based terror organizations — with help from Inter-Services Intelligence — have set up hundreds of terror cells/modules across India. A terror module is a functional unit  which includes one or more terror cells. Every cell works independently of the other and the handlers in Pakistan manage these cells without worrying about the Indian agencies. The recurring terror strikes in our country suggests that the Indian agencies does not have the required human intelligence about the numerous cells and modules that operate here. They are simply clueless and even if they catch a suspect, he may not be able to give much information as other cells operate on their own.

An illustration of a cell given by M K Dhar is below: 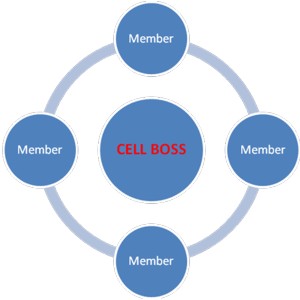 According to Dhar, module are more complicated than cells. A module may have 3/5 hubs and each hub may have 3/5 cells, he says. An illustrative diagram of a module given by Dhar is as follows.

So, given the complicated nature of terror operations, it is very vital for any intelligence agency to have human intelligence about the adversary. Bilateral talks with Pakistan (to please the US or under pressure from it) can go on but India must never forget the fact that there are some people in power in Pakistan whose sole aim is to bleed India forever.

In one of my previous posts after the attack on Mumbai on November 26, 2008, I had advocated for reviving the covert unit of RAW in order to teach Pakistan a lesson. The terror elements across the border (both within and outside the government) should pay a heavy price for killing Indians.