The kidnappers released her after the government of the day accepted their demand and released five jailed terrorists. The entire episode questioned India’s capacity to deal with such threats and it showed that we will always be a soft state in dealing with terrorism. The incident occurred in the same year when insurgency erupted in Jammu and Kashmir.

As India observes the first anniversary of the deadly terror strike in Mumbai, we have forgotten the fact that its also the 20th anniversary of terrorism in India. Violence against the Indian State that began in Jammu and Kashmir in 1989 has now spread to almost all of India. Year after year, the country has been hit by terror strikes of greater magnitude, but all we do is organize candle light vigils for the victims, observe the anniversaries, and talk about resilience, and courage.

We forget things very easily and hence never learn from our mistakes. Nobody seems to be questioning the government as to why the Mumbai attack inquiry report has not been tabled in the Maharashtra Assembly till now. And why has it been designated as classified? If the US can make public the 9/11 Commission report and own up to the mistakes made by the administration, why can’t the Indian Government? The spineless politicians of India have really failed this country.

Even after a year of the Mumbai attack, there are so many missing links in the entire incident. A very vital question of the local involvement in the attack was conveniently overlooked and never addressed. With security experts claiming that a large number of sleeper cells are active across the country, overlooking such a vital point will only increase the possibility of another attack in the future. But we have got used to it now. The Headley-Rana episode has proved beyond doubt that Pakistan-based terror organisations, with the help of ISI, have penetrated deeply in India and we are not simply equipped to counter their evil designs.

Also, has the situation on the ground changed since the November 26, 2008 Mumbai attack?

While we observe the 20th anniversary of terrorism in India and the first anniversary of Mumbai attack with the same old rant of courage, resilience, and hope, the actual situation is summed by this week’s (November 21-27) issue of OPEN Magazine. The cover story headline explains everything that I have written in just two words. Take a look. 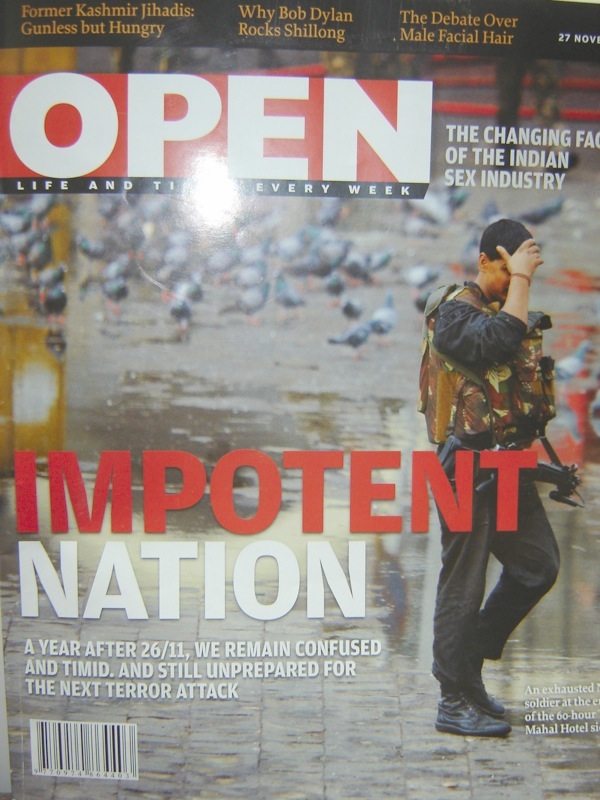 3 thoughts on “Waiting for the next terror attack”